On March 1, Iceland celebrated Bjórdagurinn, or Beer Day. It honours the lifting of a 74-year ban on beer. Imposed in 1915, well before the American Prohibition, Iceland finally repealed the ban 1989.

This underpopulated island nation near the top of the globe is known for its clean, crisp air, cinematic landscapes, and its icy volcanic beauty. Having recovered from economic upheaval, Iceland has transformed into one of the top tourist destinations of the world. Indeed, the country often hosts more than five times its population in visitors each year! 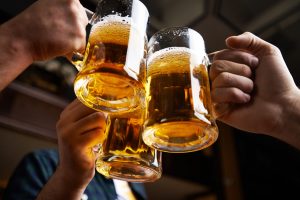 Back in 1908, Icelanders voted to ban all alcoholic beverages, with the ban to take effect from 1915. However, when Spain refused to buy Iceland’s main export, fish, if they did not in turn buy Spanish wines, the ban was partially relaxed. In 1921, red and rosé Spanish and Portuguese wines were allowed to be bought.

Much like the Prohibition in America, people resorted to brewing their own alcohol, or to smuggling it into the country. This led to another referendum in 1935 to legalise spirits. However, beer, with an alcohol content of 2.25% or more, was not included. This was done to appease the temperance factions who believed that relative cheapness and easy access of beer would harm the population. Another factor was that beer was then associated with Denmark, a country Iceland was fighting to gain independence from, succeeding in 1944.

In the following years, may attempts were made to legalise beer, but it was only in 1989 that it finally happened. Now, beer is the most popular drink for Icelanders, and they celebrate it each year on March 1, with a “skál”, Icelandic for “cheers”.