A new Viking restaurant, Mjølner, brings Norse folklore and traditions to Australia. It is said to be created “in Thor’s image”, and we’re not just referring to Chris Hemsworth!

The Viking restaurant offers diners “contemporary interpretation of the Viking feasts and traditions”. Guests are offered proper Vikings daggers before the meal which they can use to cut meats. There is also a range of signature cocktails inspired by Norse folklore.

At the start of each meal, patrons are also offered a shot of mead, which should be accompanied by the traditional cheer of “Skål”.  The Viking restaurant also has a selection of nine beers on tap. They are even served in authentic drinking horns. 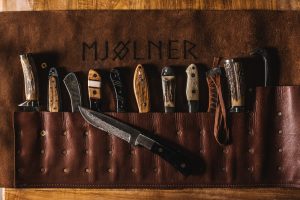 You can choose Vikings knives to eat with before your meal. (Image ©Mjølner Restaurant)If this isn’t enough to get you drinking like a Viking, Mjølner has a huge selection of over 300 whiskeys from around the world. One of them is even decanted into a replica of Thor’s hammer, Mjolnir, giving the restaurant its name. Another is called Flóki in reference to the TV show Vikings. There is also a Viking beer hall in Seattle.

Mjølner is currently open in two locations in Australia, in Sydney and Melbourne. It is managed by the award-winning hospitality Speakeasy Group. The restaurant’s menu is inspired by both Viking and Scandinavian food. Its Sydney restaurant in Redfern is located in an old tobacco factory, giving it an atmospheric setting.

Sven Almenning, the owner of The Speakeasy Group, is himself from Norway. As he says in an interview with The BRAG, “The backstory takes the assumption that the Avengers are real, that Hulk is real, that Thor is here. Because Thor is here, not back home in Valhalla – it’s his venue. The idea is it’s Thor’s bar, not my bar.”

The new Viking restaurant is described as a place where “sophistication and opulence meet revelry and decadence.” Designed in the contemporary Scandinavian style with Viking-themed elements, it is also available for private events and special occasions.

To find out more about the restaurant or make a booking (which is recommended), visit Mjølner’s official website here.