More
Home Europe Scotland Scottish Highlands Could Introduce Tourism Tax on Campers In The Region By...

Scotland’s Highland region has agreed to charge tourist a tax after struggling to cope with an increasing number of visitors. The Scottish Highlands has become the first area in the UK to introduce a ‘tourism tax’ on campers, as the council approves a GBP 1 per-night levy.

The charge is being called a Transient Visitor Levy, or TVL. The reason for such a charge or tourism tax is to keep the villages and towns of the region in good condition. In the past, there were some concerns regarding a negative impression on visitors due to the poor standards of facilities in the area. Some of the problems raised included litter being left on the streets, human waste being dumped down drains and cars on the road creating gridlock.

The Scottish Government wants to introduce a tourist tax. It is estimated this could be worth £14.6m per year in Edinburgh & £10m annually in the Highlands. How much could other areas benefit?

In the Highlands, wild camping is a popular pursuit among walkers and climbers in places like the Cairngorms. Known for its scenic beauty, the tourism industry is the most important of them all as it supports almost 25,000 jobs. According to council figures, almost 6.5 million visitors came to the areas in 2018. Under the TVL proposal, the Highland Council will impose a rule that hotels and other business would have to charge visitors extra money to offset the impact of growing tourism on local infrastructure.

Imposing a local tax on visitors gives a clear statement that certain areas are more expensive than others.

With an estimate of up to 10 million to be raised by the annual TVL amount, the money can then be used for the betterment of the towns and villages in the region. Speaking at a council meeting on Monday, Cromarty Firth councillor Maxine Smith said: “ We love tourists in the Highlands, and they spend millions here, but they don’t bring it to council, they bring it to business, and we have to do all the extra work, pick up the tab of public services”.

The tourism sector is already facing unprecedented challenges with recruitment and retaining of skilled staff, a situation critically exacerbated by the prolonged and damaging uncertainty around Brexit. Regardless of how the levy is framed, this would act as a further unwelcome tax on this hard-pressed sector. It will almost certainly influence where visitors will choose to stay and also be an additional layer of complexity to local taxation which could lead to a decline in inward investment. 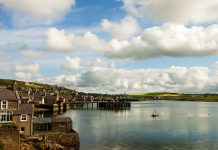 A Short Guide To Travelling To The Orkney Islands In Scotland