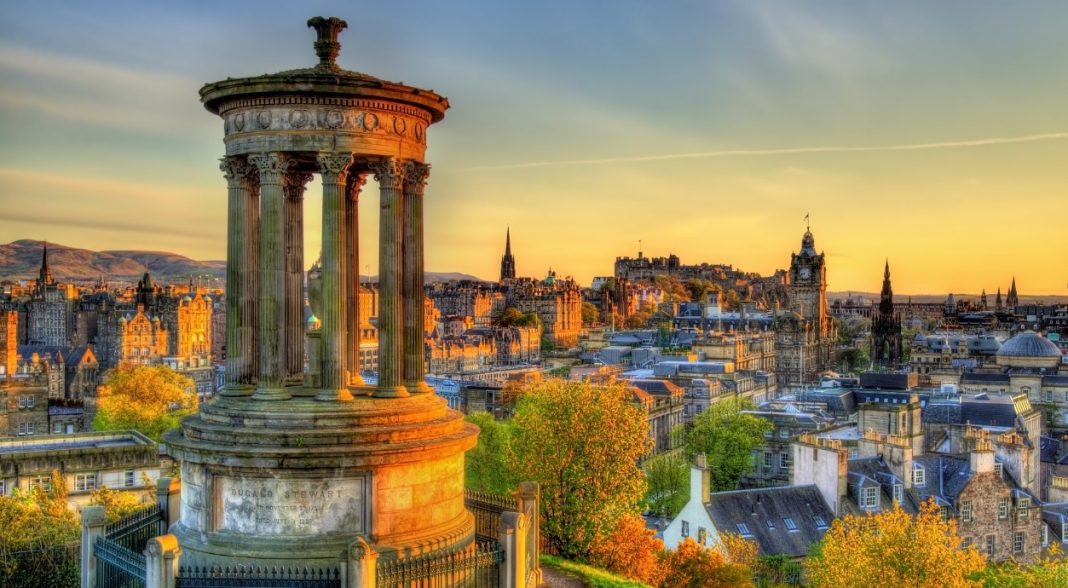 Edinburgh (Dùn Èideann in Gaelic) is the capital of Scotland and is located on the country’s east coast. Steeped in history, the city is a combination of the medieval (the Old Town), the Georgian (the New Town), and the modern. There are so many things to see in Edinburgh.

It is the second most visited destination in the UK after London. Full of historical and cultural attractions, Edinburgh is a truly unique city to explore. Its opulent palaces, vibrant festivals, fascinating museums, literary traditions, and delicious food, make it a must-see. Here are 11 things to see in Edinburgh:

Set on the volcanic crag of Castle Rock, the imposing Edinburgh Castle dominates the city’s skyline. Built over centuries, the oldest parts of the castle date back to the 11th century. Rich in history, it has seen numerous royal ceremonies and fierce battles. It is also home to various museums as well as the Stone of Destiny and the Honours of Scotland (the crown jewels).

Edinburgh’s most famous street, the Royal Mile runs through the old town from Edinburgh Castle to Holyrood Palace. It is home to many fascinating buildings, such as St Giles Cathedral, the Edinburgh Story Museum, the Camera Obscura, the Scotch Whisky Experience and a lot of shops and restaurants. However, be wary of tourist traps.

Like Castle Rock, Arthur’s Seat is part of a dormant volcano system. Looming over Edinburgh, it provides breathtaking views of the city. However, if you’d prefer an easier climb, head to Calton Hill. Apart from equally spectacular views of the city, it is the site of the striking National Monument inspired by the Parthenon of Athens, the City Observatory, the Nelson Monument, and various other Victorian statues and buildings.

4The National Museum of Scotland

Located in the medieval Old Town, the National Museum of Scotland has something to interest everyone. Art, design, fashion, history, technology, and animals are just a few of the many things to see across its seven levels. Don’t miss the giant T-Rex, the Schmidt Telescope, and Dolly the Sheep. However, if art is what interests you, head to the Scottish National Gallery. Filled with amazing art by masters like Botticelli, Raphael, Titian, Rembrandt, Vermeer, Constable, Turner, Monet, Degas, Van Gogh and Gauguin, the impressive collection is worth a visit.

Scotland is often synonymous with whisky. One of the most famous spirits around the world, Scotch Whisky has a fascinating history. Visit the excellent Scotch Whisky Experience to learn about how its made, stories behind the magical craft, and get to view and taste the world’s largest collection of whisky.

With hundreds of thousands of plants, a giant lily pond, a rock garden, and towering Victorian glasshouses, the magnificent Royal Botanic Gardens are beautiful to visit at any time of the year. Originally built in 1670, the gardens have over 13,302 different species of plants across various themed areas.

Located at the other end of the Royal Mile from Edinburgh Castle near Arthur’s Seat is the opulent Palace of Holyroodhouse. It has been the official home of Kings and Queens of Scotland since the 16th century. Today, it is still the Queen’s official residence in Edinburgh. Don’t miss the 16th century apartments of Mary, Queen of Scots and the beautiful gardens. The palace is open throughout the year except when members of the Royal Family are in residence.

A major Edinburgh attraction since 1835, the Camera Obscura and World of Illusions is a fascinating building filled with five floors of optical illusions, tricks and puzzles. There are also themed rooms with interactive exhibits, a mirror maze, a hologram exhibition, and a “tunnel of dreams”. Also, check out the large periscope that gives a panoramic view of the city

The majestic St Giles’ Cathedral is located on the ever busy Royal Mile. It is dedicated to the patron saint of Edinburgh, Saint Giles. The 14th-century cathedral features, intricate carpentry, vibrant stained-glass windows, and vast ceilings. Its famous crowned steeple is an iconic part of the Edinburgh skyline.

Much of the Old Town in Edinburgh is made up of narrow, winding streets known as closes. Deep beneath the Royal Mile lies the “Real Mary King’s Close” which was submerged underground and has been frozen in time since the 17th century. This underground warren of streets is still shrouded in mystery and allows you to travel back in time to a period of plague, murder, intrigue, and ghosts.

The main street of Edinburgh’s New Town, Princes Street is the city’s favourite shopping street. It is filled with high street shops and famous department stores. Located at one end of the street are the the Princes Street Gardens. Here you can see the famous Walter Scott Monument and the Ross Fountain. In the winter, the garden is are transformed into an exciting Christmas Market

Edinburgh is very well connected. The Edinburgh International Airport offers a wide range of domestic and international flights. The city’s main railway station, Edinburgh Waverley Railway Station, lies at the centre of the city, between the Old and New Towns. It is a major hub of the Scottish rail network with regular trains to all major destination in Great Britain. There is also a second major station, Haymarket.

The city itself has an efficient bus system, the Lothian Buses, as well as a small number of suburban trains. There is also the newly opened Edinburgh Trams that link much of the city. Unfortunately, much of Edinburgh can be nightmare to drive in due to the  narrow medieval streets. However, most attractions are near each other and it is a delight to walk around the atmospheric streets.

There are lots of other things to see in Edinburgh, and if we’ve missed any be sure to share them in the comments below.