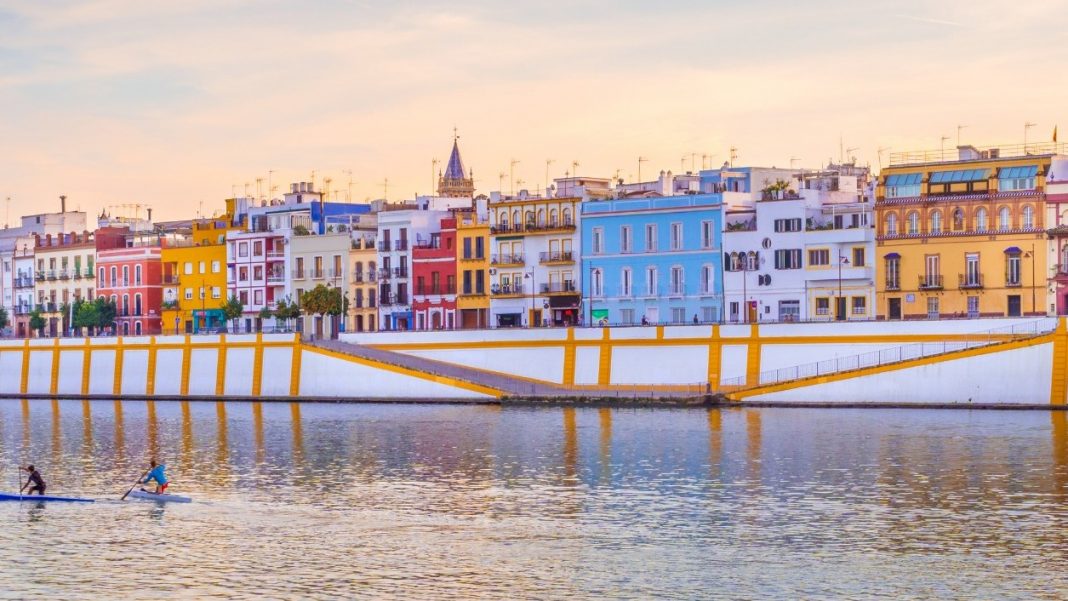 Seville (Sevilla in Spanish) is the capital of Spain’s Andalusia region. It is famous for its rich heritage, delicious food, and magnificent buildings. Its vibrant outdoor plazas, fabulous nightlife, and interesting museums are just some of the wonderful places to see in Seville.

Located on the Guadalquivir River, Seville has existed as a seaport since Roman times. However, this European city reached its peak under the Muslim Moorish rulers. Full of both Moorish as well as Catholic monuments, an iconic bullring, here are some places to see in Seville:

This beautiful Moorish palace is still in use by the Spanish royal family. Built in the 14th century in the Mudéjar style, it was once the site of Almohad palace. The palace is filled with beautiful courtyards, lush gardens, and carved ceilings. It is a UNESCO World Heritage Site and was featured in Game of Thrones as the Water Gardens in Dorne.

The Plaza de España was built for the 1929 Ibero-American Exhibition. Covering 50,000 square meters, it is located within Maria Luisa Park. Its coloured ceramics (azulejos) and 48 tiled alcoves each represent a different province of Spain. The semi-circular plaza is bordered by a canal and is filled with busts of important national figures. It was used in Star Wars Episode II – Attack of the Clones as the planet Naboo, and in Lawrence of Arabia, among other films.

This enormous cathedral was built between 1402 and 1517. It is one of the largest cathedrals in the world and has 80 chapels, impressive interiors, and historic relics. However, it is best known for housing the tomb of Christopher Columbus. It was built over a former Moorish mosque, and its minaret, the Giralda and the bell-tower, still remains. You can climb up its 34 ramps to see breathtaking views of Seville.

Known as the ‘Mushrooms of the Incarnation’, the Metropol Parasol was built between 2005 and 2011. Standing at 26 meters tall in the Plaza de la Encarnación, it is the largest wooden structure in the world. It is also a museum housing Roman remains.

Originally built part of the 1929 Ibero-American exhibition, Seville’s Archaeological Museum collects important artefacts from archaeological sites around the city. It is full of precious artefacts from the Phoenicians, Romans, Tartesians. Don’t miss the Treasure of El Carombolo that dates back the 6th century, and the statue of Venus de Itálica. You can also visit the nearby Museum of Arts and Traditions.

Built as a military watchtower in the 13th century by the Almohad Caliphate, ‘The Golden Tower’ was meant to control access to Seville via the Guadalquivir River. Later, it was used as a prison. It is named for the golden shine it reflects in the river, especially at sunset.

One of Andalusia’s most iconic barrios is the is the charming old Jewish neighbourhood of Santa Cruz. Now the heart of historic Seville, it was where Ferdinand III originally confined the city’s Jewish population when he conquered the city from the Moors in 1248. A maze of cobbled streets, narrow alleyways, and picturesque squares, it has some of the city’s best tapas bars and flamenco joints.

The Museo de Bellas Artes features paintings and sculptures from the Sevillian School. Developed during the 17th and 18th centuries, this art has a highly ornate baroque style. Most of the work in this museum come from monasteries and convents around the city that were closed in the 19th-century.

Seville’s Real Maestranza bullring is one of the city’s most popular sights. The ‘Plaza de Toro’ was built between 1762 and 1881 and is full of Spanish history and tradition. There are still fights held here today, but the arena also has a museum. Also, don’t miss the impressive baroque black iron Prince’s Gate.

Maria Luisa Park is the largest green space in central Seville. Once a part of the nearby 14th century San Telmo Palace, the park was donated to the city in the 19th century. The park itself is filled with amazing sights. There is an ornamental pond, a pavilion, a sculpture, orange trees, and a tiled fountain. The park was also the site of the Ibero-American Exhibition in 1929.

The 16th century Casa de Pilatos was once owned by the Marquis of Tarifa. It was dubbed the  ‘House of Pilate’ as it was thought to resemble the home of Pontius Pilate in Jerusalem. Built in the Andalusian style, it also features a central courtyard surrounded by Mudéjar structures. Don’t miss the intricate tile and plasterwork, and the many Roman and Greek statues. The palace was featured in Lawrence of Arabia and 2010’s Knight and Day.

Seville is quite easily accessible. The Sevilla International Airport has a regular bus connection with the city. There is also the Sevilla Santa Justa Station which has trains from all over Spain and Europe. You can also enter the city by bus at the Plaza de Armas or the Prado de San Sebastián bus stations. The city also has great public transportation systems. There are the local buses the Seville Metro, and the rentable “Sevici” bikes.

There are lots of other places to see in Seville, and if we’ve missed any be sure to share them in the comments below.