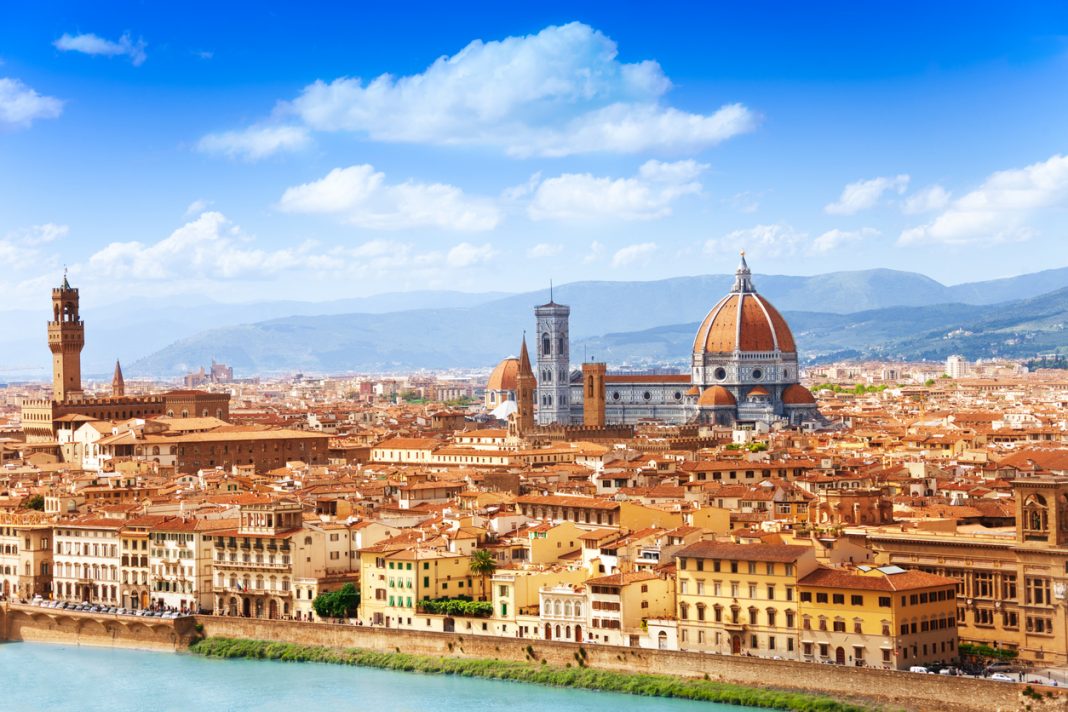 Florence (or Firenze in Italian), the capital of Italy’s Tuscany region, is famous for its many Medieval and Renaissance treasures. There are lots of things to see in Florence, from magnificent cathedrals to fascinating museums. This city is rich in both history and culture and is perfect for both art enthusiasts and food lovers; and however many time you visit, you’re sure to feel like you’ve only scratched the surface.

Also Read: 18 Underrated Towns in Italy You Have To See

Here are some of the top things to see in Florence:

One of the most famous attractions in Florence is the Piazza Duomo. It is home to the magnificent Cathedral of Santa Maria del Fiore (sometimes referred to as “the Duomo”). This amazing Renaissance cathedral is one of the largest in Europe and is full of amazing art and hidden secrets. You can climb to the top to see the frescos by Giorgio Vasari that line the interior of the dome and explore the museum below. You can also climb to the top of the adjacent bell tower, the Campanile di Giotto, where you get breathtaking panoramic views of Florence; and check out the wonderful baptistry, or Il Battisterio di San Giovanni.

The Uffizi Gallery is perhaps the most famous museums in all of Italy, as well as being one of the most celebrated art galleries in the world. It features a rich collection of Italian Renaissance art cultivated and curated by the Medici family over centuries. Here you can see masterpieces by Michelangelo, Botticelli, Da Vinci, Caravaggio, Raphael, and more.

Look out for Botticelli’s Primavera and Birth of Venus (pictured), da Vinci’s Annunciation, Caravaggio’s  Medusa, and Bacchus, Raphael’s Pope Leo X and Cardinals and Madonna of the Goldfinch, Michelangelo’s Doni Tondo, and Titian’s Venus of Urbino.

Another famous landmark in Florence is the Ponte Vecchio. This iconic bridge is lined with colourful buildings and shops. It was also the only bridge not destroyed by bombs during World War II. There is also a hidden corridor running above it, the Vasari Corridor, which connects the Palazzo Vecchio to the Uffizi, and the Palazzo Pitti and was used by the Medici family to cross unseen between the two. Now it is home to a magnificent gallery, with many pieces of art.

Located in the grand Piazza della Signoria, the Palazzo Vecchio was once the administrative centre of Florence. It was built during the Renaissance when the Medici family ruled the region. The building is now a museum, and also a popular destination for weddings. In the Piazza della Signoria, you will also find many wonderful statues and sculptures, as well as the Fountain of Neptune and the Gucci Museum.

The Galleria dell’Accademia is the second most famous museum in Florence. Best known as the home of Michelangelo’s David, the gallery also has many more amazing sculptures by Michelangelo and a large collection of paintings by Florentine artists from the Renaissance. It is much smaller than the Uffizi, and is affiliated to the University of Florence.

This indoor market is one of the largest in the city, and is where most of the local restaurants get their produce. While the ground floor has stalls selling all kinds of amazing meats, cheeses, vegetables and more, the upper section has a recently renovated food court where you can sample some delicious Tuscan food.

These lesser-known Florentine churches also have much to offer. The Basilica di Santa Maria Novella is located near the main train station of Florence. It is one of the oldest churches in the city and is known for its beautiful façade, gorgeous courtyard, and its secret cloister. Located near the Mercato Centrale is the Basilica de San Lorenzo, where many members of the Medici family were buried.

This huge palace was the residence of the Medici family, and still houses many of their heirlooms as well as some of the greatest art from the Renaissance era. Originally built in 1458 for Lucca Pitti, it was later bought by the Medici family in 1549, and greatly expanded. Now the largest museum complex in Florence, it is divided into sections that exhibit silver, clothing and costumes, refurbished residences, and the family’s art collection.

Florence has many wonderful gardens, but one of the most well known are the Boboli Gardens. Located behind the Palazzo Pitti, they span 11 acres and are full of statues, sculptures, ponds, hidden pathways and fountains. There is even an amphitheatre, and a series of standalone museums. The gardens are the perfect place to spend some time away from the crowded city.

Just off the Piazza del Duomo, you will find the Piazza della Republica. This charming square is full of cafes, bars, and restaurants with outdoor seating, as well as a grand arch and a colourful old carousel.

Another wonderful escape from the hustle and bustle of Florence is the Villa Bardini. This ornate villa dates back to the 14th century and is set atop a hill overlooking Florence and the Arno River. Apart from its spectacular views, you can also see the two small galleries inside the villa, as well as the surrounding gardens.

The church of Santa Croce is one of the most well known in Florence. While it looks much like the other Renaissance buildings nearby on the outside, it is quite mesmerising once you get inside. Apart from a chapel, museum, and garden, there are spectacular cloisters. Many famous Italians such as poets, artists and writers are also buried here including Dante Alighieri, whose statue you can see outside.

The outdoor Mercato del Porcellino is located in the 16th-century Loggia del Mercato Nuovo. Originally a covered luxury-goods market, it is now known for its leather shops and souvenir stalls. Just be sure you’re not overpaying for fake items.

The Piazzale Michelangelo has some of the best views of the city of Florence, especially at sunset. Set on a hill on the south bank of the Arno River, it was designed by architect Giuseppe Poggi in 1869. Dedicated to Renaissance sculptor Michelangelo, it has bronze copies of some of his most famous statues.

Tucked away below the Piazzale Michelangelo is the picturesque Giardino delle Rose. It was also designed by architect Giuseppe Poggi in 1865 on the southern slopes of the Monte alle Croci. The rose gardens have over 350 varieties of roses, a dozen sculptures, lemon groves, and a Japanese garden, as well as wonderful views of the Arno River and city.

Are there any more unmissable things to see in Florence that we’ve missed? If so, be sure to share them in the comments below.