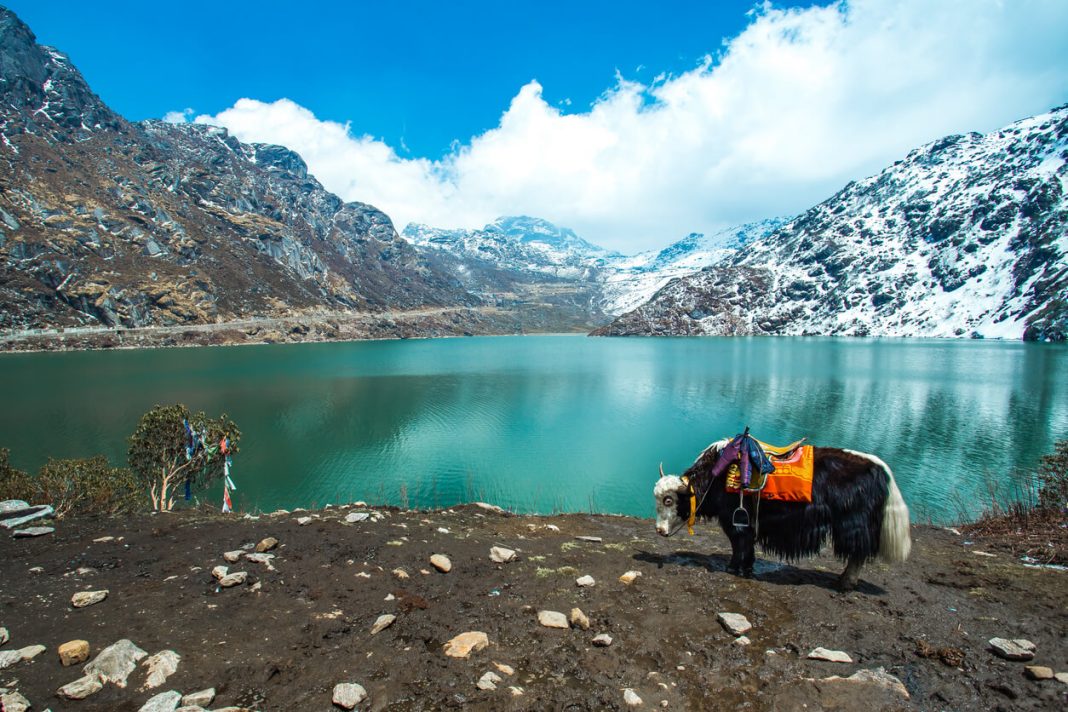 It is said that “All Great Things Comes in Small Packages”. Bordered by Buddhist powerhouses of Bhutan and Tibet, Sikkim is a strong preserve of the religion’s tradition, beliefs and spiritual practices. Despite being one of the smallest states of India, Sikkim is a treasure trove of visual potpourri. Located in the Eastern Himalayan Range at a height of approximately 5500 meters, Gangtok, the capital of Sikkim, is a kaleidoscope of magnificent monasteries, beautiful temples, spectacular stupas, quaint cafes and sprawling parks. With the inauguration of the first airport of Sikkim in Pakyong, a visit to this beautiful place has become easier and faster. And there are some amazing places to visit in Gangtok. And these recommendations come based on my personal experience.

Best places to visit in Gangtok

After China annexed Tibet in 1950, many religious gurus relocated from Tibet to Sikkim. Located 23 km from Gangtok, it is the largest monastery in Sikkim and is the seat of the Karmapa Lama – the third highest monk in Tibetan Buddhism. It is also the most important seat for the Kagyu sect of Tibetan Buddhism outside of Tibet. Surrounded by monks’ quarters, the architectural design of the four-storied building looks like the replica of the original Kagyu headquarters in Tibet. The spacious stone courtyard in the middle serves for the ritualistic lama dances on specific spiritual occasions as per the Tibetan Buddhist calendar.

A legendary Lama known as Drubthob Karpo, apparently known for his flying powers is credited with the foundation of the Enchey Monastery in 1840. One of the major recognized Gompas of Tibetan Buddhism, it was rebuilt in 1908 by the 10th Chogyal (King) – Sikyong Tuluku. Constructed in the shape of a Chinese Pagoda, the interiors are replete with colourful traditional Tibetan monastic paintings.

Trulshig Rinpoche, a celebrated Lama and head of the Nyingma order of Tibetan Buddhism built the Do Drul Chorten Stupa in 1946. Apparently, the place was known to be haunted before the establishment of this structure. Considered to be one of the holiest stupas in Sikkim, it consists of 108 Mani Lhakor (prayer wheels), the turning of which represents an important aspect in the chanting process of the devout Buddhist. Visit this place and get the prayer wheels rolling.

Located near the Do Drul Chorten, one must visit this unique institution. Established in 1958, it has the largest collection of Tibetan arts and works in the World outside of Tibet. A delight for history enthusiasts, it contains rare collection of statues, traditional art forms, thangkas (painted, woven and embroidered scrolls) and age-old manuscripts in Sanskrit, Tibetan, Chinese and Lepcha.

Apart from harbouring these magnificent monasteries and stupas, Gangtok in its upper reaches houses two beautiful temples – Ganesh Tok and Hanuman Tok, the former being more popular among the locals and tourists.

Ganesh Tok at 6500 feet above sea level is a small, clean, well-maintained temple of Lord Ganesh. A shop on the ground floor sells the usual religious paraphernalia and even fashion accessories! A nearby café serves fresh momos, noodles, parathas and other refreshments. This place provides sweeping views of the valley and arguably is the best vantage point to see the beautiful city of Gangtok.

A 4 km steep drive through serpentine roads will take you to Hanuman Tok. At 7200 feet, this place provides an unimpeded view of the majestic Mt.Kanchenjunga. Visit Hanuman Tok if you prefer quietude and solace.

4 km from Gangtok, located amidst lush green flora in a beautifully landscaped theme park, is the Banjhakri Falls. Falling from a height of 70 feet, it’s a small vertical fall with few artificial hurdles created by the tourism department. Traditional gazebos, colourful narrow footbridges, manicured garden, flowered pathways, life-size statues and figurines relating to Shamanic culture and exhibits of tribal life form make it one of the popular tourist spots.

The flamboyant city is also the ideal base to visit the glacial lake of Tsongmo. More popularly known as Tsangu Lake, it’s at an altitude of more than 12000 feet in East Sikkim. 35 km from Gangtok, frequent landslides and infrequent repair work on the roads will make the travel experience quite similar to a ride in a bullock cart on a rocky road. The destination though makes you forget the ordeal.

Walled by steep snow-covered mountains, the lake glitters in the afternoon sun. The small scattered white puffs of clouds cast the crystal clear water in a soft, diffused glow. To visit this place, a Restricted Area Permit is required which is easily arranged by an authorized travel agent.

Further up the road from Tsangu Lake, an additional one hour journey will get you to Nathula Pass (border with China) at a height of 14140 feet – the offshoot of the ancient Silk Road connecting Sikkim to China’s Tibet autonomous region.

The nippy evenings in the city are best enjoyed on MG Road – a small paved stretch with a plethora of shopping, lodging and dining options. It is all bustles, jostling with cafes and bars and people chattering in varied languages. The beautifully decorated road with lampposts, park benches and colourful flowers looks quaint and retro chic.

Most of the popular hill stations in India have been devoured by commercialization and Gangtok is not completely denuded of this demon. But you can do it all – eat by a hillside cosy cafe, meditate in a monastery, window shop for hours together, take pictures of the towering mountains, experience subzero temperatures or share a drink with the friendly locals.

With just enough of an alternate city vibe, Gangtok with cursory views of the radiant Himalayan peaks and threaded by gurgling streams is the quintessential destination of North East India.

Spicejet flies daily from Kolkata to Pakyong airport. Gangtok is an hour’s drive from here. Airfares on this route are quite expensive and one can also choose to drive to Gangtok from Bagdogra airport (4.5 hrs).

You might also want to read about the reasons to visit Pelling in West Sikkim.