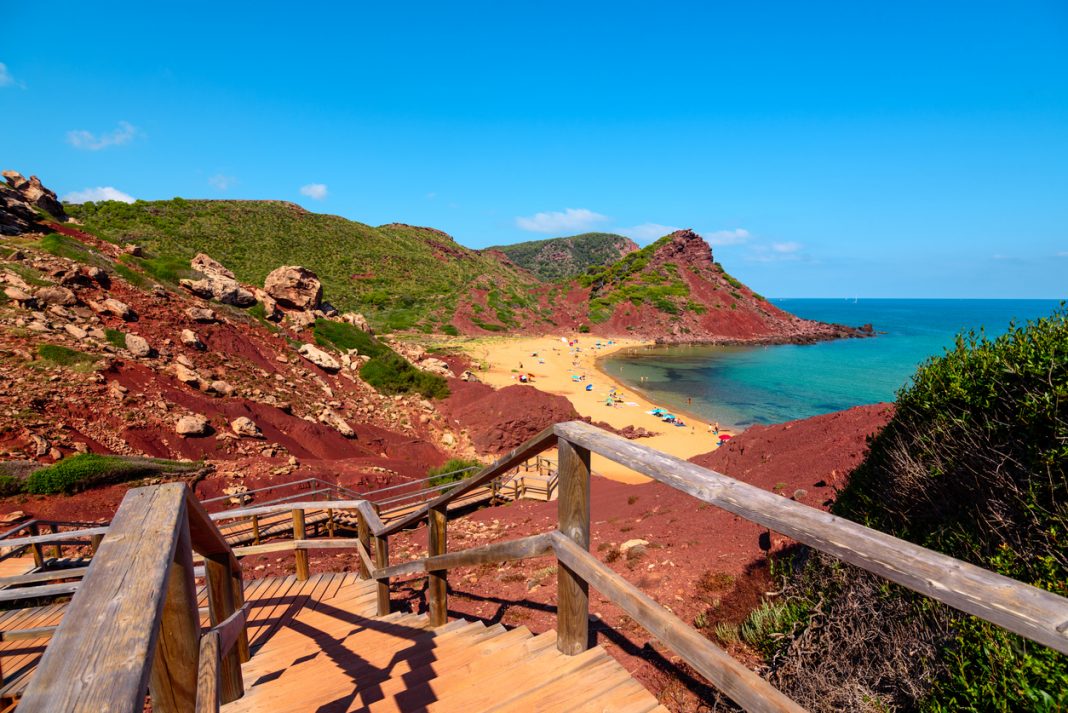 150 miles off the coast of Barcelona lies the magical island of Menorca. It is one of a few islands in the Balearics which is known for its beauty and its unique landscapes. I lived in Menorca for 9 months and therefore was able to experience almost every aspect of its culture. One of my favourite adventures in Menorca was hiking the Cami de Cavalls (The Horse Trail).

Now, I am by no means an experienced hiker. It’s not that I hate it, I can just sometimes find it a bit boring. So, when I’m travelling and I decide to hike, there needs to either be a beer at the end, or the views must be marvellous. Luckily for me, in Menorca, the motivation happened to include both things. The Cami de Cavalls is a 186 km trail which encircles the entire island. It is a coastal pathway that takes you along dramatic cliff-edges, into deep forests, and along sandy white beaches.

Every stage of the path is different as the island is extremely diverse-every few kilometres you can feel as though you have been transported to a different country or even a different continent. As well as this, the differing weather conditions allow you to see the island in all its wonder. And…every 10km or so I can guarantee you will find a bar.

But WHAT is this path of horses? What does it MEAN Lauren?

Prepare to be educated, dear reader. The Cami de Cavalls is considered to be of historical interest and national heritage to the Balearic Islands (it’s kind of a big deal), and therefore the whole path is protected, so that’s pretty cool. Historically, people believe that it was used in the war, and by farmers, to get around the island in a stealthy manner.

The great thing is, that the majority of the path is far away from any roads, so if and when you decide to hike this masterpiece, you will feel like you have gone back in time before civilisation, especially in the islands most remote and wildest areas (which are my faves).

Many Menorcan people will tell you that the island is famous for 3 things: black horses, spicy sausages and beautiful beaches. I would like to add another-the individual lighthouses which are scattered around the perimeter of the island and can be seen at every stage of the Cami de Cavalls. They are seriously, very cool. Not only are they HUGE but they also have loads of history.

As I did the whole of the Cami de Cavalls, I was able to see all of them and it feels like you are collecting them as you go along. They really are very special and very important to the island’s history, which includes maritime disasters and war at sea. My housemate loved them so much that she even got a tattoo of a lighthouse on her arm to remember Menorca…but you don’t have to go that far. Unless you want. You do you.

THE GREAT NORTH (of Menorca)

I want to talk about the difference between the North and South side of the island because the difference is phenomenal, so here goes. We begin with the north. The north is colder (of course), more dramatic in terms of the coastline, and not as touristy. I loved the northern part of the Cami de Cavalls because there was barely anyone else along the road and I felt like I was alone with the sea which was dreamy.

If you like cliffs, natural rock arches, volcanic rock, rocks, rocks and more rocks, the north is for you! It rocks (hahah)! You get it, barely any sandy beaches here, very sharp and edgy but BEAUTIFUL. If you go to the northern side of the island, make sure to pack plenty of snacks and cervezas because due to the lack of holiday parks etc, there aren’t as many restaurants or shops.

White beaches, lagoons and a piña colada in your right hand…oh yeh baby that’s the south! The south side of the island is a toasty paradise which is why it is so popular with tourists, and there are plenty of holiday parks. The great thing is, if you are hiking the Cami de Cavalls in the heat of summer, at every kilometre there is a beach which is perfect for swimming and cooling down. The south is so dramatically different from the north, which is crazy because the length of the island is only 47km at its furthest.

Overall, I think we can agree that Menorca is very special and has everything a holidaymaker could ever want or need. As a hiker or an adventurer, the Cami de Cavalls has so much to offer. You can hike, cycle and even horse ride the trail. An important thing to know is that if you plan on doing the trail in one go, it is recommended to allow 10 days, so you can really enjoy the towns and views on the way. Another thing to remember is that camping is only allowed in designated campsites which are few and far between, so it is important to book and plan your accommodation for each night before you set off. Finally, have fun!

What are you waiting for? Book that flight!