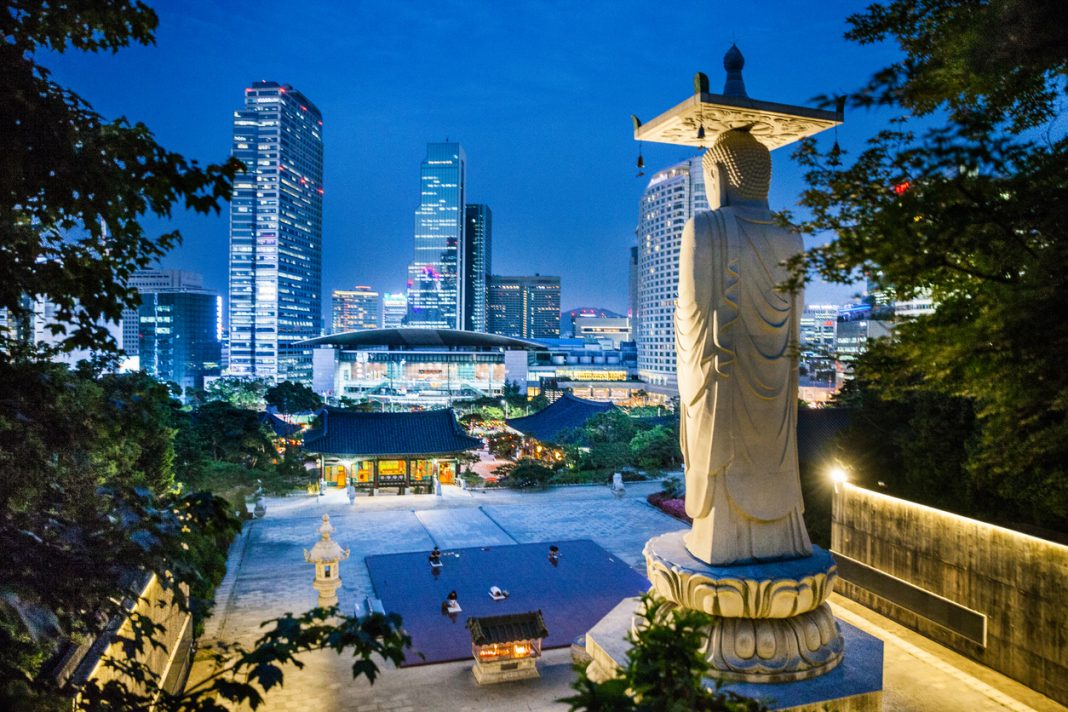 It’s known for both its hilly countryside dotted with cherry trees and centuries-old Buddhist temples, as well as its high-tech cities such as Seoul, South Korea’s capital. With its intriguing mix of urban hotspots, historic sights and idyllic countryside, you can find a wide variety of tourist attractions that we’ll explore in this travel guide to South Korea.

South Korea is known for its welcoming hospitality, delicious food, and a packed calendar of festivals and events—there is always something happening here. It is also an excellent destination for all kinds of adventurous activities, like hiking and bicycling in the summer and skiing and snowboarding in winter.

What This Article Will Cover

In this extensive travel guide to South Korea let’s take a look at what this amazing country has to offer, from historic villages to breathtaking nature and delicious food. There are many wonderful things to do in South Korea. And, if you’re planning to go sightseeing in South Korea by yourself, we’ve also covered basic logistical information such as transportation and seasonal sights.

How To Reach South Korea

South Korea is very well connected to most destinations. Here is how you can get there.

The main international airports in South Korea are Incheon Airport and Gimpo Airport in Seoul, and Gimhae Airport in Busan. All are well-connected via public transport. Smaller cities like Jeju Island, Gwangju, Ulsan, and Daegu have their individual airports that serve international destinations in Asia and are very well connected to Incheon, Gimpo and Gimhae.

Ferries travel regularly from cities in Japan and China to South Korea. The Incheon International Ferry Terminal in Seoul is a major hub, while Busan Port has boats from Hakata, Japan. The  Mokpo Ferry Terminal hosts boats from Shanghai.

By Rail and Road

You can’t get into South Korea by road or by train, as it’s surrounded on three sides by water and on the fourth by the DMZ and North Korea. Once you’re in the country, however, you can get around using both.

How To Get Around In South Korea

The two major domestic airlines in South Korea are Korean Air and Asiana Airlines. The main domestic hub is Seoul’s Gimpo Airport, and there are large airports in cities like Busan, Jeju, Daegu, Gwangju, Cheongju and Yangyang. There are also connections to other places such as Yeosu, Sacheon, Ulsan, Pohang, Gunan, and Wonju.

South Korea has an extensive network of ferries that connect hundreds of offshore islands to each other as well the mainland. The main hub is Incheon’s Yeonan Pier, though more distant islands in the south can be reached from Daecheon harbour and Gunsan.

There are both local and long-distance buses that provide a frequent and inexpensive service to every corner of the country, from major cities to rural areas. Fares start from 1200 KRW,  or less than 1 USD (for a local city ride) to 4000 KRW or around 3 USD (for an intercity bus)

Taxis are numerous and can also boast inexpensive fares. They are metered with prices determined by distance and time. However, since many drivers may not know English, always have your destination written down in Korean. Hiring your own car isn’t recommended for first-time visitors, as there are massive traffic jams and traffic rules are frequently ignored.

South Korea has an excellent train network, but it’s not comprehensive. It’s operated by Korail, and travelling by train can be the most comfortable way to get around for long-distance travel. Most stations have signs in both Korean and English. The fastest train is the Korea Train Express (KTX), though you can also use the Saemaeul services that only stop in major towns, or Mugunghwa trains which have more frequent stops. Whichever service you choose, consider buying a Korail Pass, or ‘KR Pass’ for discounts.

The most popular time to visit South Korea is during summer (June–Sep), though this period also sees sweltering heat and very heavy rains. You can visit between Nov–April when it’s snowing for skiing and other winter activities (it’s also an excellent time for visiting museums and galleries). However, perhaps the best times to visit are in late spring (May) when you can see all kinds of pretty flowers, and in autumn to see the trees change colour. Both these periods are also when South Korea’s weather is pleasantly cool.

There are lots of wonderful things to do in South Korea, both cultural and natural. From high-tech cities and historic sights to idyllic countrysides and serene beaches, here are some of the best things to check out when sightseeing in South Korea.

Arts, Festivals And Culture In South Korea You Can Experience 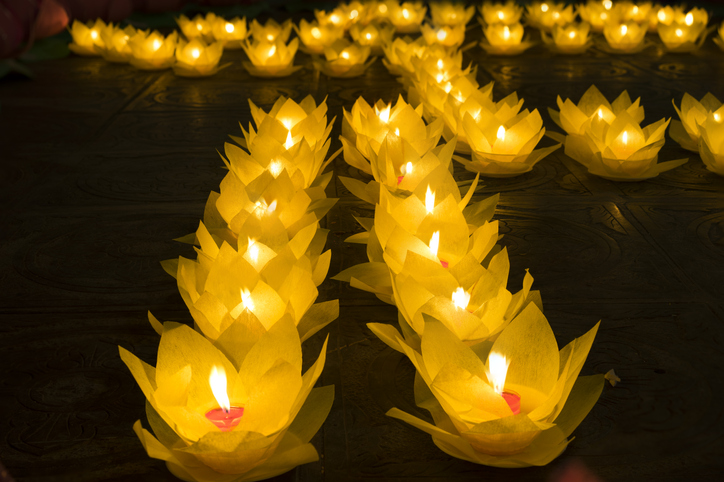 South Korea is full of many wonderful collections of art, from the National Museum of Modern and Contemporary Art in Seoul to the performance spaces of the Asian Culture Complex in Gwangju, which are popular sights on a travel guide to South Korea.

There are many celebrations and festivals that unfold through the year in the country, and some of the most popular ones include the Yeongdeungpo Yeouido Spring Flower Festival, where you can see masses of cherry blossoms in Seoul (April), Jongmyo Daeje, which honours Korea’s royal ancestors on the first Sunday of May, the Lotus Lantern Festival, a lantern parade on the weekend preceding Buddha’s birthday (in April–May), and the Busan International Film Festival held in Busan Cinema Center every October.

Seasonal Events You Must Not Miss In South Korea

South Korea has lots of things to do during the year but offers something special during each season. The early part of the year (Jan–Feb) is an excellent time to visit if you want to partake in winter activities like skiing or check out an ice festival at Taebaeksan. Spring (March–May) is the start of blossom season when whole areas turn pale pink with a flurry of delicate cherry blossoms. The summer months (June–Aug) are the perfect time to see the nature and wildlife of South Korea—go hiking, or visit breezy coastal areas and lofty mountains. During autumn (Sep–Nov), the weather turns cooler and the country looks like it’s been painted with a palette of rustic yellow, orange, and fiery red.

Unique Things You Have To Check Out In South Korea

South Korea has many unique and unusual sights. One of these is the DMZ (the demilitarized zone) between North and South Korea, where you can actually step over the border into North Korea, in a conference room that straddles the official Military Demarcation Line. Another is Mr Toilet House, a toilet-shaped museum that mixes hilarious exhibits with more serious ones in Suwon.

You can also visit the Sex Museums on Jeju Island (such as Jeju Loveland) to see sex-themed outdoor sculpture parks, and more “hands-on” exhibits or the Haesindang Park filled with phallic sculptures in the fishing village of Sinnam.

South Korea is famous for its music and TV shows (K-pop and K-dramas). You can visit all the places featured in them, such as the Korean Folk Village in Yongin (seen in ‘The Moon that Embraces the Sun’, ‘My Love from the Star’, and ‘The Face Reader’), Nami Island (seen in ‘Winter Sonata’) and Suncheon Open Film Location (a massive film set seen in series and films like ‘Bread’, ‘Love and Dreams’, and ‘Gangnam Blues’). K-pop fans can also check out the SMTOWN Coex Artium in Seoul (for fans of EXO, Red Velvet, or SNSD), the BTS Bus Stop at Jumunjin Beach (for fans of BTS) and Play K-pop on Jeju Island to immerse yourself in all things K-pop.

How Can You Be A Better Traveller?

South Korea is known for its detailed social etiquette, so it’ll be appreciated if you read up on these before you visit. It is also known for its lush green countryside, so be responsible by disposing of your trash correctly, and respecting the natural habitats of the local wildlife. If you really want to get the best experience of Korean culture, skip the hotel and opt for a small inn or bed-and-breakfast at one of the many historic villages in the country.

So, Based On This Travel Guide To South Korea, Do You Think It’s The Place For You?

South Korea’s wide range of attractions for almost every conceivable kind of traveller, sets it apart from more popular Asian alternatives. You can explore everything from the bright lights of urban hotspots like Seoul to the stunning flora and fauna of the mountains and islands, as you’ve seen in this travel guide to South Korea. However, the fact is that South Korea is probably best enjoyed by either those looking for a cultural destination (be it historic culture or more recent K-pop culture) or for an offbeat natural destination like stunning mountain peaks and views, waterfalls and hikes.