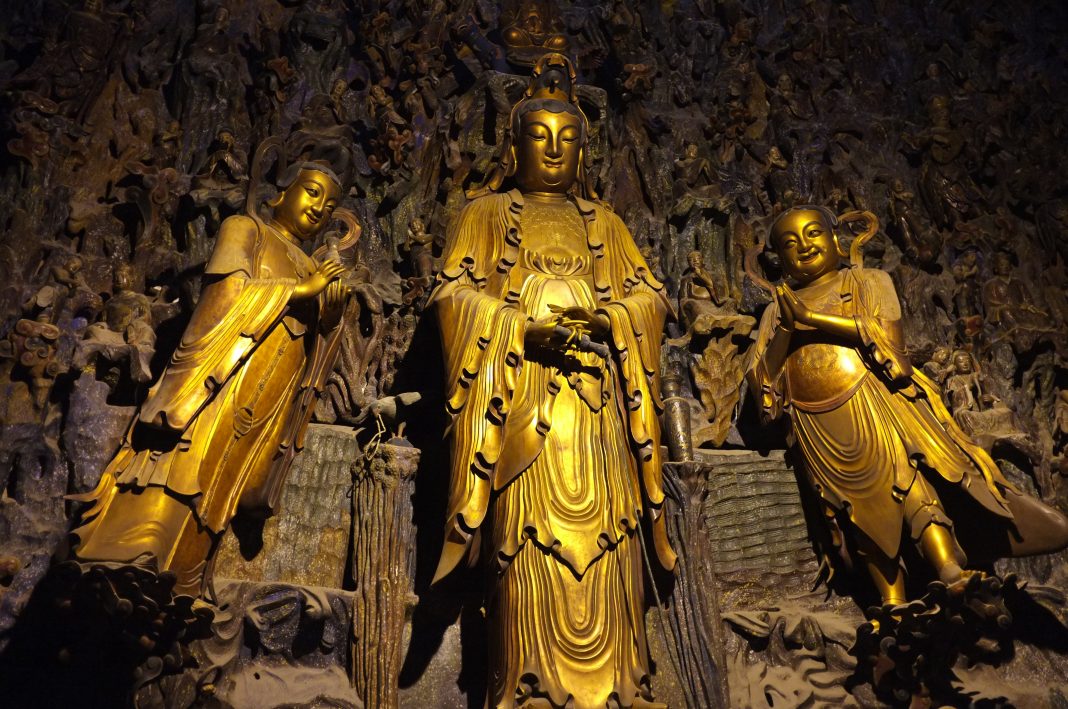 Culture and religion in China have stood against time and won. Temples in China are serene places of worship as well as works of art. The religions that are largely practised in China are Buddhism, Taoism, Confucianism, and Christianity. Most temples in China reflect the dynasty that ruled when it was built. The element of nature is omnipresent in most of the temples in China because most of them believe that human beings are a part of nature. Therefore, there are many Chinese temples located in forests, caves, and hills. The architecture of these temples is complex with exquisite designs and elements like pillars and arches to create a pleasant environment for visitors. According to ‘Time’ magazine, in 2016 there were 245 million practising Buddhists in China. This made up for 18 per cent of their population. An additional 21 per cent followed folk religions with Buddhist beliefs ingrained within their teachings. So, a lot of the best temples in China are largely Buddhist temples and monasteries.

Also read: Incredible ancient temples in India that are must-visits

Located in the capital city, the Temple of Heaven was built by Emperor Yongle in the 15th century. The place where the temple was built is where the kings of the Ming Dynasty (1368-1644) and the Qing Dynasty (1644-1911) hosted the Heaven Worship Ceremony. It is not one of the more common temples in China because it is more of an altar than a temple. Temple of Heaven is spread across 2,700,000 square meters and is enclosed by a lengthy wall. The Chinese belief that heaven is round and the earth is square is also reflected in this temple. The northern part inside the walls is semicircular in shape, and the southern part is square, thereby symbolising heaven and earth respectively. The other building in the temple premises is the Huanqiutan, the altar, Huang Qiong Yu, also called the Imperial Vault of Heaven and Qiniandian, which is the Hall of Prayer for Good Harvest. The temple is surrounded by a park and the trees inside the garden are maintained in a straight line. Chinese emperors, also considered ‘sons of Heaven’ offered sacrifices for a good harvest.

The first Buddhist temple built in China, the White Horse Temple, was built in 68 AD. Emperor Ming of the Han Dynasty sent his men to the western regions to bring him Buddhist scriptures. Three years later two monks from India visited the emperor on white horses and brought Buddhist statues and scriptures with them. The emperor then ordered for this monastery to be built and named it the White Horse Temple. This is also where the first Chinese Buddhist scriptures were written, as the two monks also translated the Forty-Two Chapters of Buddhist Sutras. This temple became the centre for Buddhism in China. It now holds the tombs of the Indian monks, the Hall of Heavenly Kings, Hall of Guidance, Hall of Mahavira, and the Cool and Clear Terrace. These halls have statues of the laughing Buddha, Maitreya, Buddha of Medicine, Amitabha Buddha, and more.

Located in the Hengshan Mountain, the Hanging Monastery is built into a cliff that is 246 feet off the ground. The temple is an architectural marvel that has withstood natural forces and survived around 1,400 years. The Hanging Temple is one of the most unique temples in China because it combines Buddhism, Taoism, and Confucianism. Along with Buddhist prayer houses, it also has the sculptures of Sakyamuni, Confucius, and Laotzu. Furthermore, there are 80 sculptures in 40 halls that are made of stone, iron, terracotta, and copper. The temple has been renovated by the Ming and Qing Dynasty. Crossbeams and stilts inserted in the cliff and rockface became its support.

Also known as the religious and spiritual centre, Jokhang Temple is 1,300 years old. The temple is enlisted as a UNESCO Heritage Site and was built by the Tibetan king Songtsen Gampo. The atmosphere around the temple inspires your inner spiritual self, with pilgrims prostrating and worshipping the statue of 12-year-old Sakyamuni Buddha. The architecture is also an added attraction, with golden roofs that shine brightly in the sunlight. The maroon and gold interiors leave you awestruck in this two-storeyed temple. The roof also offers golden sights of the bustling Barkhor Bazaar and the beautiful Potala Palace. The Gelug School in Tibetan Buddhism takes care of the temple, but they welcome Buddhists from different branches to worship.

The word shaolin translates to a small forest, and the Shaolin temple has been around for 1,500 years, in Songshan Mountain. The Shaolin Temple’s legend says that an Indian Buddhist monk Buddhabhadra, or Ba Tuo visited China in the time of the Northern Wei Dynasty in 495 AD. Emperor Xiaowen extended his support but instead Buddhabhadra turned it down and was granted a piece of land on the mountain. The Shaolin Temple is also famous for martial arts and kung fu training. It is believed that the Indian monk Bodhidharma taught the monks in the temple a few exercises based on which martial arts were developed in the temple. Shaolin Temple faced a lot of destruction by Emperor Wudi in 574 AD and later the Qing rulers burnt it down,  and destroyed many sacred scriptures. The temple saw many attacks and renovations over  time, the most recent being in 1928. Now, the Shaolin Temple is where Shaolin Kung Fu and Buddhism are practised.

Another UNESCO World Heritage Site, the Longmen Cave Temples are situated on the banks of the Yi river. Carved into limestone cliffs, the caves display the best pieces of art from the Northern Wei and Tang Dynasties (316-907). Also called the Longmen Grottoes, the Longmen Caves stretch on for 12 kms. There are approximately 100,000 statues with the largest being a 17-metre-tall statue of the Buddha. The rule of Emperor Xiaowen marked the start of the construction of the caves in 493 and ended 400 years and six dynasties later. These caves, like other Buddhist temples in China, saw the wrath of the anti-Buddhist movement in the 9th, 19th, and 20th centuries, resulting in many statues being destroyed and vandalised.

Located in Xi’an City, the Big Wild Goose Pagoda was built during the Tang Dynasty. The ancient temple served as a place that stored Buddhist statues, scriptures, and writing procured from India by Buddhist Xuanzang. The building is seven storeys tall and the architectural design is simple but refined. The Giant Wild Goose Pagoda is one of the most famous Buddhist temples in China and is on the premises of the Da Ci’en Temple, another temple with fascinating architecture. This pagoda is more square than round, indicating the Tang style of architecture. Right beside the temple is an open-air mall, restaurants, and galleries.

8. One Of The Most Famous Temples In China: Lingyin Temple, Hangzhou

Situated in the Wuling Mountains, the Lingyin Temple is also called the Temple of Soul. According to legend, the name was suggested by an Indian monk who visited the site and thought of it as a place where immortals lived. The place is a treasure trove for people interested in Chinese Buddhism, as it is a centre for the collection of Buddhist scriptures and teachings. The temple is also believed to be one of the wealthiest temples in China. It also houses a tablet that was written by Emperor Kangxi of the Qing Dynasty (1644-1911). Hall of the Five Hundred Arhats, Hall of the Medicine Buddha, the Grand Hall of the Great Sage, Sutra Library and more interesting spots to explore are situated within the temple grounds.

Explore These Architectural And Cultural Delights

Temples in China have amazing legends tied to them. The rise of Buddhism and Buddhist temples in China also shows how close the country’s architecture was to India, with the pagoda style and other similarities. However, there is a firm and distinct style all of its own too. The presence of nature around these temples makes the setting feel tranquil and helps you tap your spiritual side easily. When you visit these temples, be sure to follow proper etiquette. Put your phones on silent and don’t use flash photography. The temples have numerous signs regarding photography, so be sure to follow them and take permission if you want to take pictures of the monks or worshipers. You must leave your shoes outside the temple in a designated area and it is advisable to cover your shoulders and legs. You can pray by lighting a stick of incense, but do not make fun of the traditions.