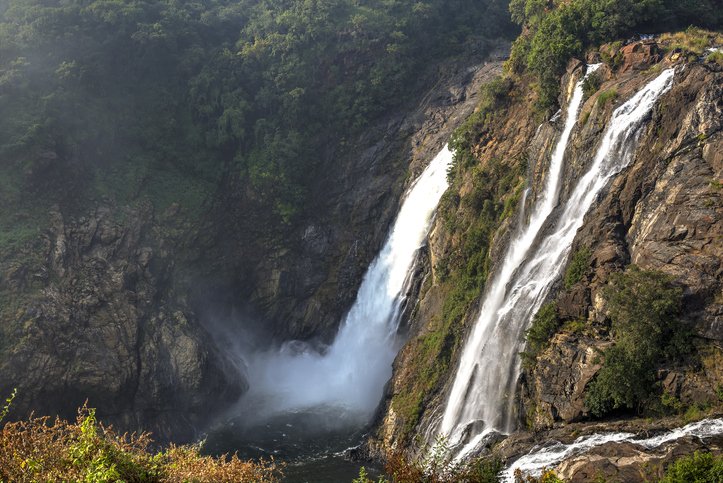 Karnataka can be particularly hot and humid during the Indian summer. Luckily, if you want to escape the nagging humidity, you don’t need to travel halfway across the world. If you’re in Karnataka, you can take a break from the heat without breaking your bank by visiting refreshing waterfalls. Among the various mesmerising tourist spots, the dynamic waterfalls in Karnataka leave everyone speechless.

Blessed with abundant natural beauty, Karnataka has a fair share of waterfalls to offer. And while they may not be as cold as the hill stations of Himachal Pradesh, these destinations can still offer a change in weather. The beautiful falls of Karnataka with the amazing weather attract a lot of love birds. You can either take a refreshing dip in the waterfalls or simply gaze at the gushing showers while strolling along the trail.

Karnataka has over 40 waterfalls spread all along the length and breadth of the state. While a few of these waterfalls are seasonal splendours that come alive during the monsoons, many of them can be witnessed throughout the year. The charm of the mystical waterfalls in the state attracts tourists from all around the world.

Also Read: 25 famous waterfalls around the world that are absolutely worth the visit

Here Are 12 Of The Most Irresistible Waterfalls In Karnataka

Formed by a tributary of the river Kaveri in Coorg, Chelavara Falls is one of the most famous waterfalls in Karnataka. A scenic pleasure for tourists, surrounded by lush coffee and fragrant orange plantations, these vigorous falls gush down from a height of 150 feet on a tortoise-shaped rock. Hence, this fall is also known as Embepare translating to tortoise rock. Tourists can enjoy having a picnic with friends and families over the hill-top, or hike up to Chelavara Waterfalls. To avoid any kind of fatalities, tourists are advised against taking a dip.

Best time to visit: September to November
Entry Fee: None
Timings: 7 AM to 6 PM

Resting at the foothills of Pushpagiri Hills in the Kodagu district, Mallalli Falls is a stunning milky white waterfall of Karnataka that takes a deep plunge of over 1000 metres. Throughout its surroundings, you will find deep green valleys, mountains, and forests. The clear white waters of the river Kumaradhara gushing down the waterfall and the lush green forests are a sight to not be missed. A seasonal waterfall, Mallalli Falls is best witnessed during the monsoons. You can trek up to the location and soak under the cool water of the falls.

Best Time to Visit: June to September
Entry Fee: None
Timings: 9 AM – 5 PM

Located near Madikeri, Abbey Falls is the outcome of a combination of numerous streams and monsoon showers. In the memory of the daughter of the first British Captain of Madikeri, Captain Chaplain, the British previously called this famous waterfall in Karnataka Jessi Falls. Gushing from a height of 70 feet, this waterfall is one of the most attractive falls to visit in Karnataka. Nestled amongst lush greenery, the waterfalls attract thousands of photographers and nature lovers. From the main entrance, the walk to the falls has around 200 steps downwards through pepper, cardamom, exotic coffee, and other spice plantations. The most picturesque scene of white foam gushing down the ridge can be seen through an over-bridge that hangs opposite of the falls. Shutterbugs can capture the real beauty and grace of the waterfalls.

Flowing down a height of 170 feet from the Bramhagiri hills, Iruppu Falls is a cascading waterfall nestled amidst the woodlands in the Coorg district of Karnataka. Also known as the Lakshmana Tirtha Falls, this famous waterfall in Karnataka is also a popular pilgrimage site for its connection with the mythological story of ‘Ramayana’. There is a famous Shiva temple called Rameshwara Temple which is believed to have been founded by Ram himself. A perfect destination for trekking, the waterfalls will soothe and rejuvenate you after a tiring trek. The exotic wildlife and blissful natural surroundings of the waterfalls make it an ideal place for nature lovers.

Located in the Western Ghats of India in the quaint town of Siddapur, Burude Falls is a famous waterfall in Karnataka for its breathtaking beauty which consists of lush green forests, a favourite among medium to advanced level trekkers. It is formed of a rivulet called Illimane, therefore also referred to as Illimane Falls. Descending in 5 different levels, the waterfall gets frequent local visitors and is famous as a picnic spot.

Best time to visit: November to February
Entry Fee: None
Timings: 9 AM – 5 PM

At a height of 403 feet, Kalhatti Falls also known as the Kalahasti Falls is situated in Chikmagalur. Covered with greenery, this fall of Karnataka is the perfect combination for anyone seeking spirituality and serenity in a single location. The infamous Veerabhadreshwara Temple which is dedicated to Shiva is also located here. Extremely popular among trekking enthusiasts, the ascending trek has a number of trails to get to the top of the falls. One can spot wild animals like monkeys, elephants, and bears from time to time.

Best time to visit: July to November
Entry fee: None
Timings: 8 AM – 6 PM

Also Read: Top 10 offbeat things to do in Chikmagalur

Located near the popular hill station of Kemmangundi, Hebbe Falls is hidden inside the Bhadra wildlife sanctuary. A heavenly delight for nature lovers, it is among the best waterfalls in Karnataka. Passing through some of the magnificent views of the forests and coffee estates, some adventure seekers trek to Hebbe Falls to enjoy the realm of its natural beauty. You can hear the sound of the falls gushing down from a height of 550 feet from a distance. The water of Hebbe Falls is believed to have healing qualities, thus attracting a large number of tourists who come here for a dip.

Best time to visit: November to February
Entry Fee: None
Timings: 9 AM – 2:30 PM

8. One Of The Highest Waterfalls In Karnataka: Jog Falls

Located in Shimoga, Jog Falls is one of the highest waterfalls in the state and has been termed as the second-highest waterfall plunge in India. This famous waterfall in Karnataka is a major tourist attraction and drops at a height of 850 ft. Broken into four segments—Raja, Roarer, Rocket and Rani—this seasonal waterfall is named based on certain characteristics of the streams. Basking in the glory of all that nature can offer, you can also experience exciting water adventure sports such as zorbing and kayaking.

Best time to visit: August to January
Entry Fee: None
Timings: 6 AM -6 PM

Best time to visit: July-September
Entry Fee: None
Timings: 6 AM to 6 PM

Located in Yellapur district, Sathodi falls is one of the best waterfalls in Karnataka. At a height of 15 metres, the Sathodi waterfall is locally known as Mini-Niagara and appears to be rectangular. Surrounded by evergreen forests, Sathodi Falls is not easily accessible. You’ll need to walk half a kilometre (20 min) from the entrance and parking spot to the actual falls. Running all year-round, the Sathodi Falls is formed by the union of several unnamed streams near Kallaramane ghat. A popular weekend getaway, the waterfall has a natural pool where swimming in the water is possible.

Located in the Gokak taluka of Belgaum district, Gokak Falls is one of the best waterfalls in Karnataka known for its beautifully turbulent waters gushing over the rocks and down to a fall of 170 feet. A 170-metre-long, hanging rope suspension bridge was built over this humongous waterfall allowing visitors to walk right above the fall and feel the wind pushed by the river. The general features of Gokak Falls give it a resemblance with the US’s Niagara Falls. You will also be able to see an old temple dedicated to Mahalingeshwara depicting the Chalukyan style of architecture.

Primarily a hydropower project location, Shivanasamudra is located in the Mandya district on the banks of the river Kaveri. Literally translated as Shiva’s Sea, this famous fall of Karnataka is formed by the union of two streams of water falling from a height of 320 feet. The two streams namely Gaganachukki Falls and Bharachukki Falls are a part of the Kaveri river. Tourists can enjoy the quaint town amongst the view from the vantage point and the roar of the cascading waters.

Best time to visit: September to January
Entry Fee: None
Timings: 8 AM to 4 PM

Why Should We Preserve Waterfalls?

Waterfalls are one of the most incredible natural wonders on earth; people travel from all over the world to experience this awe-inspiring force of nature. They are the centre of a balanced ecological system and, the source of life and resources. The easiest trick to reduce your carbon footprint is by avoiding littering or destroying the surroundings, and instead preserve it. Another trick is by opting for public transport while visiting these waterfalls in Karnataka. Most people visit waterfalls to enjoy its peace and beauty. Making loud noises can ruin someone else’s trip as well as disturb the animals inhabiting that place. We should make sure to follow instructions posted while visiting any waterfall in Karnataka.

Most hill stations or treks that you will be a part of will have waterfalls nearby. There is hardly anything more spellbinding and beautiful than witnessing such wonders of nature falling from great heights. So don’t miss out on these destinations whenever you’re planning a trip to Karnataka and while you’re at it don’t forget to make the most of it!