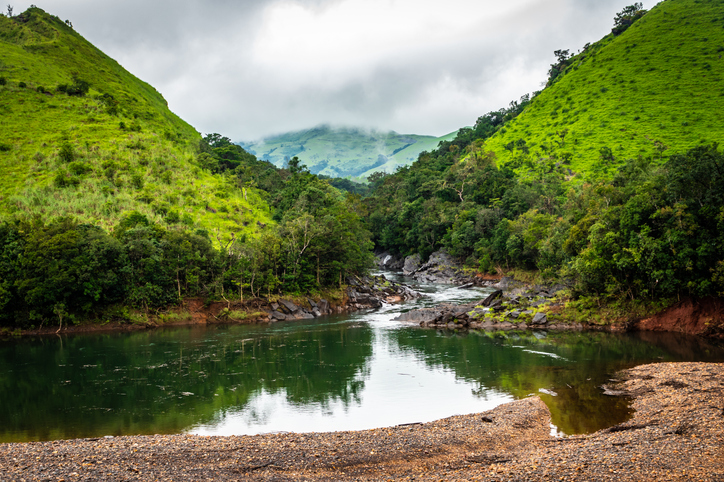 Chikmagalur, nestled in the hills of the Western Ghats and speckled with beautiful coffee plantations, is a beautiful place to spend a weekend. A holiday here is the perfect opportunity to get away from the urban jungle and relax in the lap of nature. It also offers the perfect opportunity to explore the mighty mountains and valleys of the Western Ghats. No trekking enthusiast should miss out on trekking in Chikmagalur.

Let’s ditch those party plans for the weekend and explore these great spots to go for a trek in Chikmagalur. The mountains around Chikmagalur are home to some great trails waiting to be explored. So get your trekking boots on, it’s time to get some fresh air and exercise with this list of the five best spots for trekking in Chikmagalur.

Also Read: 10 offbeat things to do in Chikmagalur

Trekking In Chikmagalur: Exploring the Hills Of The Western Ghats

Standing at 6,330 feet above sea level, Mullayanagiri is the highest peak in Karnataka. The hill in Chikmagalur district is part of the Baba Budangiri Hills in the Western Ghats. Mullayanagiri gets its name from the tomb of Mullappa Swamy at the summit. The trek to the summit is fairly easy and the view is spectacular. This makes it one of the most popular spots for trekking in Chikmagalur.

The trek starts from Sarpadhari and you have to trek for about 3-4 kilometres before reaching the summit. The months between September to April is the best time to go on this trek.

Also Read: How to pack light for a trek and not miss the essentials

2. Kudremukh Trek: Trek Through The Wilds Of Kudremukh National Park

The nine-kilometre trek starts at the Forest Office and takes you through the second Ontimara (lone tree). From here onwards, you’re on the final stretch of the trek as you head to the peak. Trekking in Kudremukh is one of the best experiences of life. The national park is home to several rare species of flora and fauna.

Spotted deer, lion-tailed macaque, Malabar giant squirrel, leopard, peacock and common langur among several other species can be found in the Shola forests here. So keep your eyes peeled as you trek along the beautiful rolling hills filled with grasslands, misty valleys, waterfalls and streams. The best time to trek here is from September to April.

3. Kemmanagundi Trek: The Most Peaceful Spot For Trekking In Chikmagalur

Kemmanagundi, also known as KR Hills is one of the most beautiful and peaceful treks in Chikmagalur. The lesser-known trekking spot is about 50 kilometres from Chikmagalur. The hill got its name from the King of Mysore, Krishnaraja Wadiyar, who used to vacation here in the summer. Kemmangundi, which is part of the Bhadra Wildlife Sanctuary, is an unspoilt bit of nature.

The trek to the peak, which stands at an altitude of 1,434 metres above sea level, takes about two days. The 20-kilometre trail is moderately difficult. Take in the breathtaking sight of the lofty hills, the babbling brooks and silvery streams, waterfalls and coffee plantations from the peak. September to April is the best time to trek in Kemmanagundi.

4. Agumbe Ghat Or Narasimha Parvatha Trek: The Land Of Snakes

The Agumbe Ghat or Narasimha Parvatha Trek is one of the most famous treks in Karnataka. The dense forests in the hills are home to several species of snakes and other wildlife. If you’re a wildlife photography enthusiast or love snakes, this is one of the best spots for trekking in Chikmagalur. The trek starts from Kigga, which lies about 90 kilometres from Chikmagalur.

You’ll need to obtain permission from the Forest Office at Kigga before you start the trek. The peak is about 6 kilometres from Kigga and it is a moderately difficult trek. Carry an ample supply of water to make it last through the trek to the peak. If you’re an experienced trekker looking for a more challenging trail, start the trek from Malandur, near Agumbe. The 13-kilometre trek is an arduous one, but the view from the grassy plain at the peak is worth the effort. The best time to trek here is from September to April.

The Kudremukh National Park is home to another great spot for trekking in Chikmagalur, called the Kurinjal trek. The trail, which is about 90 kilometres from Chikmagalur is a fairly easy one. The peak offers a great view of dense forests on one side and a sheer drop on the other. Just spend a few hours amidst nature with only the sound of a roaring waterfall and birdsong for company.

If you’re a beginner and looking for a trek that can be covered in a single day, this is one of the best spots to trek in Chikmagalur. The seven-kilometre trek to Kurinjal peak takes about 4-5 hours and another 3-4 hours to get back to the base. The best time to trek here is from September to April.

A Heady Dose Of Fresh Air In The Western Ghats

These are the five best spots for trekking in Chikmagalur. The treks in Chikmagalur are beautiful but are also very remote. Please carry appropriate trekking gear, food, water and medicinal supplies with you.

If you want to see the Western Ghats at their best, the monsoon season is the best time to visit. Bathed in rich shades of green, the hills come alive during the rains. The mist, which plays hide and seek, adds to the mystical aura of the hills. Let the cool, crisp air of the mountains wash away all the pollution of the city from your lungs and rejuvenate your soul. But beware of slippery trails and bloodthirsty leeches, which are abundant in the hills during the rainy season.

Also Read: The best tourist places to visit in Chikmagalur