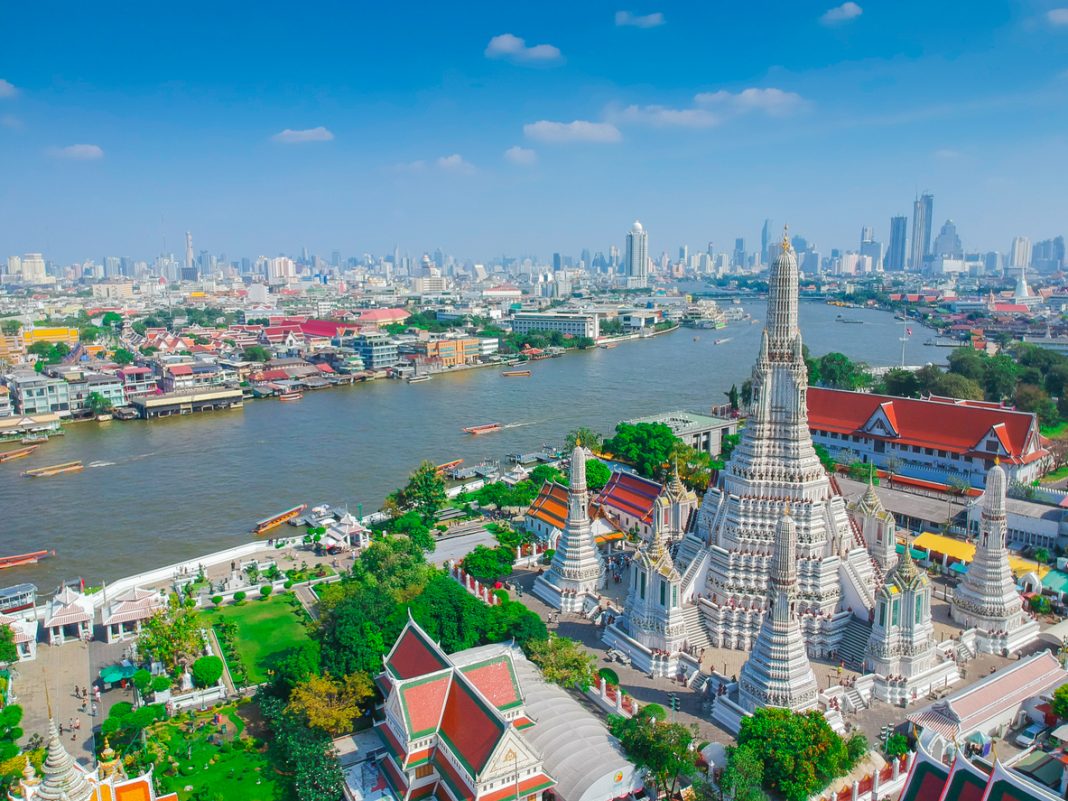 Thailand’s capital, Bangkok, is located on the delta of the Chao Phraya river, which is about 25 miles (40 kms) from the Gulf of Thailand. This bustling metropolis is known for its ornate shrines and vibrant street life. It’s the most populous city in Thailand and one of the most visited cities in Southeast Asia and the world. Rich in heritage and culture, the city is characterised by towering skyscrapers standing in harmony next to ancient temples and monasteries, grand palaces and luxury malls along with street bazaars and floating markets. The city lives up to its reputation and shows you what a modern-day melting pot of contrasting cultures and faiths looks like. The flashy nightlife will take you around its nightclubs, rooftop and go-go bars. There is absolutely no dearth of places to visit in Bangkok. Whether you are interested in art, culture, history, shopping, food or nightlife, Bangkok has something for everyone.

With its vast array of things to do and see in Bangkok, it might get confusing as to what to pick first. Which is why our list of exciting tourist places in Bangkok will be a perfect guide to start with.

Also Read: 11 Unusual Things To Do In Bangkok: The City’s Best Kept Secrets

The Best Places To Visit In Bangkok

Locally called Wat Cheang, Wat Arun is an ancient temple located on the west (Thonburi) bank of the Chao Phraya river in Bangkok. This stunning Buddhist temple is also called the Temple of Dawn and is one of the most famous landmarks of Bangkok. Its construction began under the reign of Rama II in the early 19th century and was completed by Rama III’s reign in the first half of the 19th century. Originally called Wat Makok after the name of the local village Tambol Bangmakok, it was later renamed Aruna after the Indian god of dawn to commemorate the founding of a new Ayutthaya, the former capital of the kingdom. Standing majestically opposite the Grand Palace, the temple is partly made up of colourfully decorated spires and stands over the water. Among the most popular places to visit in Bangkok, it is also one of the most beautiful temples in Thailand and the most photographed symbol of the country.

2. Former Official Residence Of The Kings Of Siam: Grand Palace

Established in 1782, the Grand Palace is a huge complex of buildings in  the heart of Bangkok, on the banks of the Chao Phraya river. The complex comprises various architectural marvels and is, therefore, the perfect place to begin your historical tour in Bangkok. This magnificent building complex used to be the residence of royals for several generations and today is one of the most popular tourist places in Bangkok. Showcasing the rich history of Bangkok, the numerous buildings in this complex are structured around in a rectangular space. Being the official ceremonial residence of the monarch of Thailand, the Grand Palace contains halls, pavilion sets, grounds, lawns, and courtyards—all showcasing a combination of Thai and European architecture. This sacred site is a must-see place in Bangkok, if only for its grandiose beauty.

Locally called JJ Market, Chatuchak Market is located on Kamphaeng Phet 2 Road, Chatuchak in Bangkok. It’s spread over 35 acres with more than 8,000 stalls, and very popular among wholesalers and traders. With the market’s sheer size and diverse collection of merchandise, ranging between clothing, accessories, handicrafts, furniture, art, food, books and antiques, it has also become hugely popular among tourists and locals. Dating back to 1942, this sprawling weekend pop up is one of the world’s largest outdoor markets. Get ready to bargain as you are bombarded with the most fantastic deals along with wafting aromas of great street food. Among the best places to visit in Bangkok, Chatuchak Market has a unique vibe that must be experienced.

Known as Thailand’s first public museum, Bangkok National Museum is located between Thammasat University and the National Theater. It was established in 1887 by King Rama V and houses the largest collection of Thai art and historical artefacts in the country. One of the best places to visit in Bangkok for history lovers, the museum occupies the former 18th-century Wang Na Palace in Phra Nakhon. The National Museum in Bangkok is the main branch museum of the National Museum in the whole country, and is also known as the largest museum in southeast Asia. Walk into one of the best collections of art and browse through the exhibits including Buddhist and devotional art, as well as pieces belonging to the Thai royal family. If you wish to enjoy the museum at its best, you can join the free guided tour which is organised on Wednesdays and Thursdays by the National Museum Volunteers at 9.30 AM in two languages, English and French. The museum complex does not allow photography inside.

Wat Phra Kaew or the Temple of Emerald Buddha is considered as the holiest Buddhist site in Thailand. It is located within the grounds of the Grand Palace complex and is locally called Wat Phra Sri Rattana Satsadaram. The temple enshrines the image of Emerald Buddha or Phra Kaew Morakot, meticulously carved from a single block of jade, which is protected by mythical Guardian warriors at every entrance. The temple was established in 1785 by King Rama I when he moved the statue across the river from its previous dwelling at Wat Arun. Sightseeing in Bangkok will be incomplete without a visit to this brightly coloured temple. Wat Phra Kaew is also known as one of the most revered Buddhist temples in Thailand. While visiting, keep in mind that visitors have to cover their knees and shoulders and also take their shoes off before entering the temple.

6. The Temple Of The Reclining Buddha: Wat Pho

The Temple of Reclining Buddha, also known as Wat Pho or Wat Phra Chetuphon is situated on Rattanakosin Island, directly south of the Grand Palace precinct in Bangkok. Spanning across a vast area of 8 hectares where a 46-metre long reclining Buddha statue resides, it is one of the largest temple complexes in the city. The temple is believed to be Thailand’s earliest centre for public education and was built as a place of Buddhist worship by King Rama I. Wat Pho hosts four chapels, comprising approximately 400 gilded Buddha images, making it the largest collection of Buddha images in Thailand. The temple is regarded as the birthplace of the traditional Thai massage and is often considered the leading school of massage in Thailand. The giant reclining statue of Buddha is gilded, and the soles of the statue’s feet are inlaid with precious stones and illustrations of the 108 auspicious symbols of the Buddha.

7. A Shrine for Brahma In Thailand: Erawan Shrine

Also called Thao Mahaprom Shrine, Erawan Shrine is one of the most popular Hindu shrines in downtown Bangkok. It was built in 1956 after the Thai government constructed the luxury Erawan hotel at the location to ward off bad luck. The shrine is home to a golden statue of Phra Phrom, the Thai representation of the Hindu God of creation, Brahma. The four-faced statue, conceptualised after the four-faced Brahma (also called Thanh Thao Mahaprom) is believed to bring those who visit good luck, and grants any visitor a wish. You’ll find many locals and tourists gather here with ceremonial offerings of incense sticks, flower garlands, fruits, and teakwood elephants. This is one of the most popular places to visit in Bangkok and it also hosts graceful Thai classical dance performances several times a day, as well as lively lion dances on special occasions.

This metropolitan city of contrasts offers historical sites of interest, such as palaces, religious spots like temples, as well as museums, parks, and a variety of shopping centres to explore. Treat yourself to delicious local Thai dishes at numerous street food stalls all over the city or indulge yourself at expensive restaurants. Ride a tuk-tuk through bustling Chinatown or experience Bangkok’s nightclubs or the cabarets. Let us know all your Bangkok experiences in the comments below.