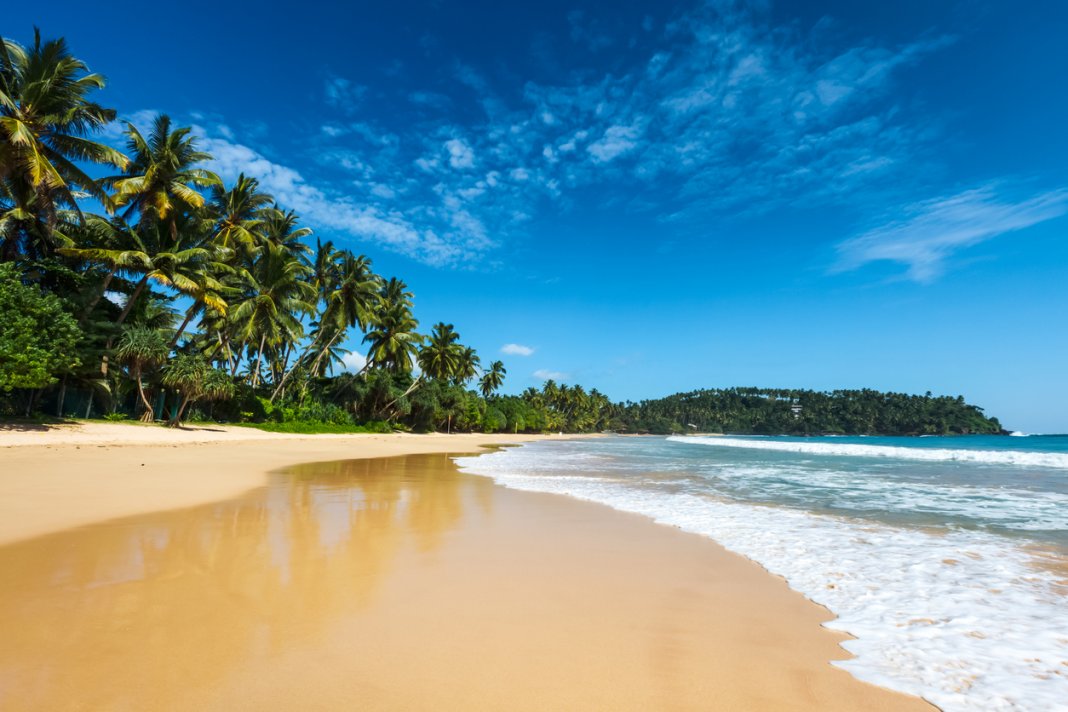 The island country of Sri Lanka, officially called the Democratic Socialist Republic of Sri Lanka, is located in the Indian Ocean southwest of the Bay of Bengal and southeast of the Arabian Sea. Famously described by Marco Polo as one of the finest islands in the world, Sri Lanka is a land of staggering contrast and spectacular beauty. This charming island gives you an opportunity to experience and see a wide variety of places to visit. A history that dates back thousands of years allows you to experience ancient ruins, while the 1,340 km coastline will give you some of the world’s most beautiful beaches. Don’t forget to explore the jungles for their wildlife diversity, tea plantations, picturesque cities, local temples and much more from our list of the best places to visit in Sri Lanka.

Also Read: The top 5 places I saw on my visit to Sri Lanka

Explore Nature With The Best Places To Visit In Sri Lanka:

One of Sri Lanka’s most striking natural landmarks, Adam’s Peak is a 2,243 metre-high mountain in the central region of Sri Lanka. Poking up from the southwestern edge of the hill country, the soaring summit of Adam’s Peak, also called Sri Pada, is an important pilgrimage site for the last 2,000 years. This beautiful peak stands head and shoulders above the surrounding hills, giving a wonderful impression of sheer altitude. Adam’s Peak has accumulated a mass of legends centred around the footprint-shaped indentation at its summit called the Sri Pada or Sacred Footprint. The Buddhists believe it is Buddha’s footprint while different faiths subsequently modified this to suit their own contrasting theologies. This tall and pointed mountain is topped by a sacred rock formation, and pilgrims traditionally climb to the summit at night in time to watch the sunrise.

The capital city, Colombo is located on the west coast of the island and is one of the best places to visit in Sri Lanka. It is known for its rich history, eclectic culture and buzzing culinary scene. Called the The Garden City of the East in the 19th-century, Colombo today is the commercial capital and largest city of Sri Lanka. This sprawling city offers a heady blend of legacies of colonial past, tropical environment, and a modern cityscape. Wander through the city and explore its mixed cultures, many temples such as the spectacular Gangaramaya Temple, and sample some delicious food while soaking up the atmosphere.

Also known as Little England of Sri Lanka, Nuwara Eliya is a hill town that is located in the Central Province. The name Nuwara Eliya means ‘city on the plain (table land)’ or ‘city of light’. With an elevation of 1,900 metres (6,100 feet) and temperate climate, this genteel highland city is considered to be the most important location for tea production in Sri Lanka. Nuwara Eliya is surrounded by mountains and has earned the name Little England due to its old British colonial buildings like Queen’s Cottage and General’s House. The area also boasts many natural wonders such as waterfalls, hills, tea plantations, and the tallest mountain in Sri Lanka, Pidurutalagala. Once you are there, don’t forget to try a cup of tea!

Located in the heart of Sri Lanka, Kandy is the second largest city. This large city is set on a plateau surrounded by central highland mountains, which are home to tea plantations and biodiverse rainforests. Kandy is the last ancient kingdom capital and even today remains the country’s most significant cultural and religious center. Hidden away between beautiful precipitous green hills, Kandy is home to one of the most sacred Buddhist temples in the world—the Temple of the Tooth which was built in the 4th century which holds a very sacred relic, the Buddha’s tooth. Get a taste of Sinhalese culture, especially if you can visit during the Kandy Esala Perahera festival (the Festival of the Tooth) which is celebrated between July and August. The festival features a vibrant religious procession with beautifully adorned elephants, drummers, fire eaters, energetic dancers and stilt walkers.

5. Eighth Wonder Of The World: Sigiriya

Sigiriya is an ancient city built on a steep slope, topped by a plateau 200 metres high. Due to its location, Sirigya is one of the most popular places to visit in Sri Lanka. The site is located in central Sri Lanka and contains ruins of a fifth century fortified city with a royal palace, monastery and some exquisite frescoes. The 200-metre high granite rock plateau formed from the magma of an extinct volcano, and is undoubtedly the star attraction and perhaps Sri Lanka’s most dramatic sight. The rock plateau was carved and transformed into a palace that was built about 1,500 years ago.This Lion’s Fortress or Lion’s Rock is a designated UNESCO World Heritage site and can be accessed by way of passageways cut into the rock face between a monumental pair of lion paws. Climb up to the ancient ruins and you can see wonderful, dramatic views of the rolling hills in the jungle below.

6. One Of The Main Beach Destinations In Southern Sri Lanka: Mirissa

Located in the Matara District of the Southern Province, Mirissa is a small beach village where all your tropical paradise dreams will come true. This beach destination in Sri Lanka will offer you beautiful hideaway beaches, surf waves, whale and dolphin watching, great bars, restaurants and a thriving nightlife scene. Enjoy a fresh coconut on golden sand beaches while you are rocking away in a hammock and admiring the swaying coconut palms. As the tourism here didn’t take off until the mid-1990s, the area still doesn’t have luxury resorts to mar the landscape, so it’s just you, the beach, and quiet during the day. Mirissa is the largest fishing port on the south coast and one of the best tourist places in Sri Lanka!

The main town of Polonnaruwa district in north-central Province of Sri Lanka, Polonnaruwa is an important ancient city ruin site. It was the second capital of Sri Lanka after the destruction of Anuradhapura, and in 1982 was inscribed as a UNESCO World Heritage site. The city is known  for some of the best archaeological treasures such as tombs and temples, statues and stupas—in a compact core of the country. Don’t forget to visit the massive (50 buildings) Royal Palace with its well-preserved audience hall, the stunningly decorated Sacred Quadrangle (at the heart of the ancient city), the impressive walls of the Lankatilaka, and the unique Gal Vihara. Polonnaruwa used to be a busy commercial and religious hub and therefore today boasts hundreds of ancient structures which are fine examples of ancient Sinhalese art and architecture.

Step into nature and explore one of the best places in Asia for seeing wildlife. Located in the south eastern region of Sri Lanka, Yala National Park is a wildlife lovers paradise. It is also known as Ruhuna National Park, and is the most visited national park in Sri Lanka. Covering an area of 979 square kilometres (378 square miles), the Park is the second largest national park in the country that extends over two provinces of Hambantota district of southern province and Monaragala district in Uva province. The park is very rich in wildlife and is home to some incredible, varied environments and ecosystems. Yala National Park has the highest concentration of leopards in the world—so don’t miss their leopard safaris. The park is also an important sanctuary for Sri Lankan elephants, many aquatic birds, monkeys, crocodiles, and critters. Explore the 1268 square kilometres of scrub, light forest, grassy plains and brackish lagoons, and surround yourself with an incredible variety of species.

The vibrant historic city of Galle is situated on the southwestern tip of Sri Lanka and is one of the major cities of the country. This coastal city which is just 130 kilometres south of Colombo, is full of charming Dutch-era villas and delightful seaside views. Galle is a well-preserved colonial port city that today serves as the provincial capital and largest city of Southern Province. Galle is focused around a large, 17th-century Dutch fort, which is a World Heritage site and the largest remaining sea fort in Asia built by European occupiers. The city is one of the best tourist places in Sri Lanka to explore on foot, where one gets to see the wide sand beach, turquoise waters, natural harbour, St. Mary’s Cathedral, and Galle International Stadium, which is considered one of the most picturesque cricket grounds.

The vibrant historic city of Galle is situated on the southwestern tip of Sri Lanka and is one of the major cities of the country. This coastal city which is just 130 kilometres south of Colombo, is full of charming Dutch-era villas and delightful seaside views. Galle is a well-preserved colonial port city that today serves as the provincial capital and largest city of Southern Province. Galle is focused around a large, 17th-century Dutch fort, which is a World Heritage site and the largest remaining sea fort in Asia built by European occupiers. The city is one of the best tourist places in Sri Lanka to explore on foot, where one gets to see the wide sand beach, turquoise waters, natural harbour, St. Mary’s Cathedral, and Galle International Stadium, which is considered one of the most picturesque cricket grounds.

Which Places In Sri Lanka Have You Been To?

Although it’s small in size, Sri Lanka is an amazing travel destination offering a wide range of places to visit. Journey through its history, nature, and beauty to understand how it has seduced travellers for centuries. Hope our list of best places to visit in Sri Lanka transforms your travel experience into a life changing one. If you’ve already visited Sri Lanka, then tell us all about it in the comment section below