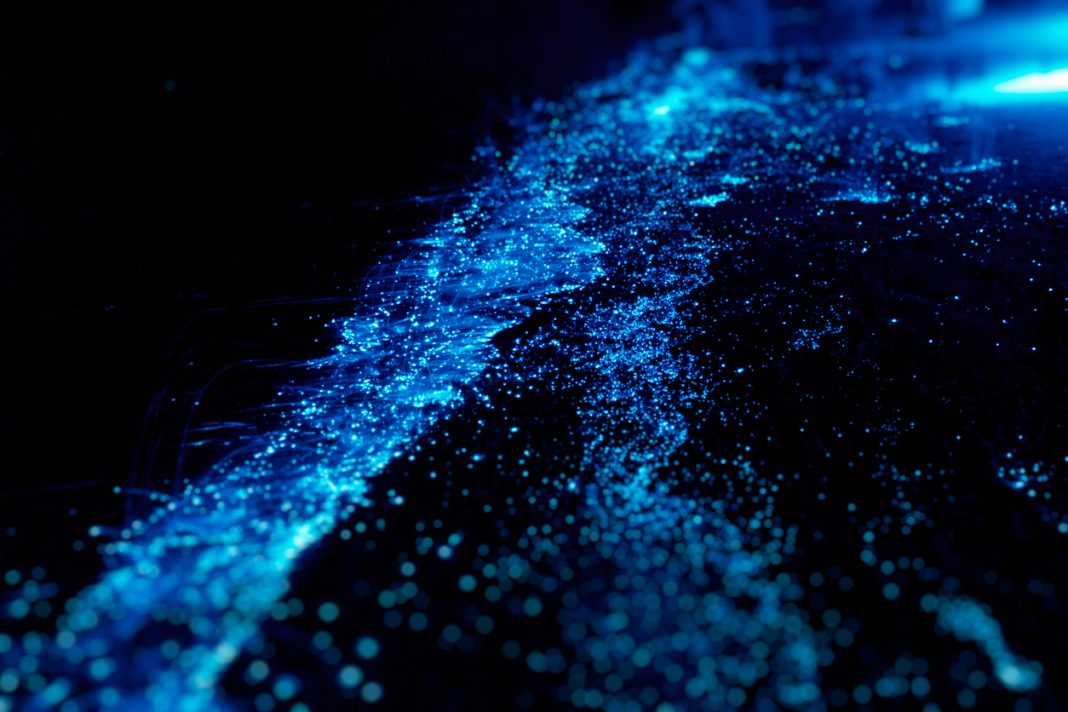 To understand the fascination with bioluminescence, we first need to understand what is bioluminescence? The Nation Geographic Society defines it as “light produced by a chemical reaction within a living organism”. It is a type of chemiluminescence, which simply means a chemical reaction where light is produced. While both land and water organisms have this ability, most bioluminescent organisms are found in the ocean. Some of these organisms are fireflies, bacteria, jellyfish, worms and snails. Across the world, there are many places where you can see this natural phenomenon.

Must-visit Spots Around The World To Witness Bioluminescence

Also known as the Vieques Bio Bay, or Bioluminescent Bay, Puerto Mosquito (Mosquito Bay) on Vieques Island, Puerto Rico, has become one of the premier locations to witness bioluminescence. The tranquil, warm, and shallow waters south of the bay offer the ideal environment for tiny unicellular organisms called pyrodinium bahamense, dinoflagellates or dinos. When these organisms come in contact with another organism, a human, a fish, or your oar, the interaction creates a burst of blue light. In 2008, the bay was officially named the brightest bioluminescent bay in the world by the Guinness Book of World Records. You can enjoy these underwater lights through kayak rides over the bay.

If you are looking for bioluminescence in Asia, the island of Koh Rong in Cambodia is the place to visit. The secluded island is the second-biggest island in Cambodia and is situated in the south of Cambodia in the province of Sihanoukville. Once you reach the island, take a late evening plankton tour where you will be brought to dark waters inhabited by bioluminescent plankton. Guests can jump into the water with a life jacket and snorkelling gear to discover how their motion sets off trippy trails of twinkling blue lights. This amazing and exhilarating experience allows you to swim with the plankton in the dark. The longer you stay in the water, the brighter the plankton seem to get. However, the surreal beauty lasts only until the tiny creatures become so agitated they begin to bite. Don’t worry, their bites are not particularly painful, but they do send everyone swimming back for the boat.

New Zealand’s Glowworm Caves are located in Waitomo village on the North Island. The village is known for its extensive underground cave systems and the Waitomo Glowworm Caves are one of New Zealand’s oldest and most iconic attractions. You can combine adventure with bioluminescence by booking a unique cave exploration experience or a black-water rafting trip that will tour the depths of the earth. The attraction is not the caves, but the thousands of matchstick-sized glow worms covering the ceiling and walls that dangle and glow blue-green.

This bioluminescence or ‘Milky Seas effect’ can be witnessed in Zeebrugge in Belgium. The village is located on the coast of Belgium and also the main port and seafront resort in the Bruges subdivision. The bioluminescence caused here occurs due to noctiluca scintillans or ‘sea sparkle’. This species of marine-dwelling dinoflagellate can thrive here because of nutrient-rich water and high concentrations of plankton food sources. As there are different kinds of dinoflagellate, the colour of their lights also vary—it can be blue, red and even green.

During low tide, you can see them only if you step on them as the planktons get stuck on the sand at the beach. So with each step, the sand illuminates and makes the floor look surreal. You get to see this effect generally during spring and the beginning of summer.

The Matsu islands in Taiwan are located off the coast of China approximately 100 miles north-west from the island of Taiwan. They are known as one of the best places in the world to see bioluminescence because during the summer months of April through August, you can usually find water around the islands glowing in a glorious shade of blue. This phenomenon is also called ‘Blue Tears’ and is caused because of harmless glowing algae noctiluca scintillians. While the algae are actually known to be quite aggressive, as they eat other bacteria and plankton, their presence is perfectly normal, and they pose no threat to humans and the surrounding environment.

Toyama Bay in Japan is located on the northern shores of the Hokuriku region of Honshu on the Sea of Japan and is known as one of the major spots to witness bioluminescence. Each year, from March to May, powerful currents force thousands of firefly squid to the surface of the ocean to breed. These three-inch phosphorescent creatures emit light along their entire bodies forming constellations and celestial formations that are a sight to behold. As these squid fill the waters and beaches during the breeding season, both fishermen and tourist operations get ready to cash in. The fishermen harvest tonnes as they are eaten as a delicacy while the sightseeing boats are filled with travellers who show up just to observe the glowing blue squid.

Merritt Island is located on Florida’s east coast on the Atlantic Ocean. The town is known for its bioluminescent kayak tours that showcase the best Merritt Island Wildlife Refuge has to offer. The dinoflagellate fireworks can be witnessed through many kayak tours. One of them is a Clear Kayak Bioluminescence tour where you can observe not only the blue swirls off of your paddle, but under your feet through the kayak’s see-through bottom. Then, there is a Moonlight Bioluminescence tour which lets the full moon illuminate your path as you take on an informative paddle tour through mazes and canals, often crossing paths with jumping schools of mullet fish, curious dolphins, and sometimes a sleeping manatee. From October through May, the Merritt Island Refuge offers glowing comb jellyfish which are oval-shaped gelatinous drifters. They congregate in the protected waters of the Indian River Lagoon and emit two kinds of coloured light: the usual blue-green bioluminescence and a breathtaking rainbow aura created when they scatter light through their cilia.

The glowing tides in San Diego, California don’t happen every year, but when it does, it’s so  big that people flock to the beaches to photograph the bright blue tides. San Diego has become a popular destination to observe bioluminescence but even scientists don’t yet know how to predict when the bioluminescent phenomenon will occur. Some of the known places to check out the glowing tides are Mission Bay and Torrey Pines Beach. The glowing waves are created when bioluminescent phytoplankton, called dinoflagellates crash in the tide, reacting and causing bioluminescence when bumped around.

Reachable only via specially licensed boats, the Blue Grotto refers to one of the nine sea caverns on the south-east coast of Malta. They are known to exhibit one of the most spectacular natural sights in the world. The tall cliffs surrounding these caves guard the treasures hidden within. This oceanic cave is marked by distinctively blue, glowing water with objects underneath the water appearing silver, red, orange, or yellow. This distinctive blue appearance is caused by sunlight shining through the cave’s metre-wide entrance and the seawater. Even your hand will appear to glow due to the difference in light refraction. While the blue phenomenon of Blue Grotto is not really bioluminescence, the radiant effect is equally stunning and even more colourful. You can only visit the cave at low tide on a calm sea and, even then, have to lay down flat in the small boat to be able to enter.

The brackish water in Luminous Lagoon in Falmouth, Jamaica is a mix of saltwater from the Caribbean and freshwater from the Martha Brae River. This water combines with nutrients from red mangrove trees to make the region a perfect environment for bioluminescent dinoflagellates to thrive. You can enjoy this incredible sight on a short boat tour that will take you to the heart of the lagoon. Waters are shallow at a mere 4 to 8 feet, so you can dive in and soon will begin to see an eerie electric blue glow that is emitted from the millions of dinoflagellates when disturbed.

Any Plans To Witness Bioluminescence?

Seeing this glorious phenomenon is nothing short of being extraordinarily unique. However, the tricky thing about these microscopic marvels is their unpredictable and ambiguous nature. Scientists are still trying to understand the migratory patterns of bioluminescence creatures, so to witness this natural wonder might also take a certain amount of luck. So, if your bioluminescence trip did not go as planned, don’t lose hope. Surely, the right time and the right place will allow you to witness this magic. If you’ve already witnessed this natural phenomenon, tell us about your experiences in the comments below.

Also Read: The Best Spots To See The Northern Lights In Canada