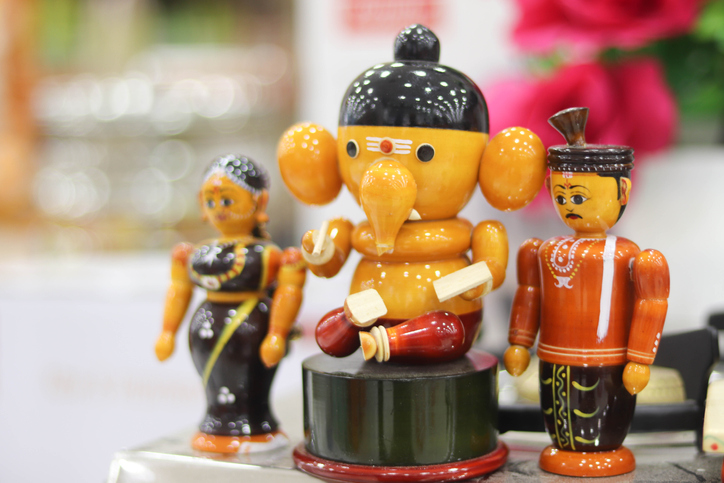 Channapatna, also known as Channpatna by the locals, is a quaint little city in the Ramanagara district in Karnataka. This beautiful city lies on the border of Ramanagara and Mandya districts. What makes Channapatna so unique and famous is the fact that the streets are lined with colourful wooden toys and lacquerware made by talented craftsmen and small-scale industries. This is why the place is also known as gombegala nagara (town of toys) in Kannada.

The toys that come out of Channapatna toy factories are so popular that they found a mention by Indian Prime Minister Narendra Modi during his monthly radio programme ‘Mann Ki Baat’ in August. He noted that the global toy industry is worth over INR 7 lakh crore and that India’s share is very small. He then gave a clarion call for the people to be “vocal for local toys”.

Also Read: 8 fun things to do on your trip to Ramanagara

How To Get To Channapatna

Those looking to travel to Channapatna by train are in luck as the city has two railway stations of its own. These are well connected with many other cities and towns.

While Channapatna does not have its own airport, the nearest ones are located in Mysore (Mandakalli Airport)  and Bengaluru (Kempegowda International Airport).

In Channapatna, you can easily travel around in local buses and auto-rickshaws. However, their frequency might be poor. Alternatively, you can hire a car from Bangalore or Mysore and drive down to the city.

The best time to visit Channapatna would be the month of November as you will witness mild rainfall and pleasant temperatures.

If you are looking to stay in the city of toys, you might be out of luck as there isn’t much choice of accommodation in Channapatna. If you want a nice place to stay, you can stay in Bangalore or Mysore and explore the toy city during the day. You can also stay at various hotels and homestays in neighbouring towns.

Check Out The World-Famous Channapatna Toys

The history of the Channapatna toys can be traced back to Tipu Sultan’s rule in the 18th century CE, when Persian artisans gifted him wooden toys. The monarch was so impressed with the craftsmanship that he encouraged the Persians to come to India and teach the local artisans how to make the unique wooden toys. Channapatna wooden toys are made mainly with aale mara or ivory wood, which gives it a polished look. They are sanded with abrasive grass and then painted with vibrant vegetable dyes to make them more beautiful, safe, and environment-friendly.

The Channapatna toys are more than just dolls. They can also be complicated and have moving parts like in their rocking horse, rabbits, train engines, motorcycles, cars etc.

Channapatna Toys And The World

Channapatna dolls, wooden toys, and puzzles (yes, puzzles!) are famous not only in India, but across the rest of the world too. Channapatna toys have been purchased by many IT companies, most notably US-based software giant Microsoft for their initiative to provide education to underprivileged children across the world. The world’s eyes fell on Channapatna after President Barack Obama and First Lady Michelle Obama showed interest in owning these wonderful pieces of art during their visit to the city in 2010. Michelle Obama purchased and took some Channapatna toys home with her for her children. The White House now houses shelves of Channapatna dolls. These iconic toys even found their way to Bhutan when the then Indian Defence Minister Nirmala Sitharaman gifted a set of toys to Bhutan’s prince. Additionally, every day, Channapatna exports approximately 70 to 80 hand-crafted dolls. Despite competition from the Chinese, Channapatna’s toys have built a name for themselves across the world.

Unknown to many, Channapatna is also home to the Dog Temple, where dogs are worshiped. The temple was built by a rich businessman named Ramesh in 2010. According to the villagers, two dogs once mysteriously disappeared from the village and a few days later, the goddess Kempamma appeared in someone’s dream and asked them to build a temple for the lost dogs close to her temple, for the protection of the village. Ever since then, the two dogs that went missing have been worshiped here. Inside the temple, there are statues of two dogs, who the villagers believe continuously watch out for them and roam the street to drive away negative energy. A grand festival is conducted every year in the village in the honour of these dogs.

Take A Wine Tour In Channapatna

Located in the Gangedoddi Village of the Channapatna taluk, Ramanagara district, is the Kādu Winery, where the Kādu and Sula brand of wines are made. It used to be known as the Heritage Winery and offered visitors a chance to tour the vineyards and watch and even be part of the wine making process. The name was changed to Kādu Winery in 2017 and it is a unit of the Sula Winery. Kādu (pronounced Kaa-du) is the first premium wine to come out of these Sula vineyards. Meaning “wild” in Kannada, Kādu is India’s first ‘Wine for a Cause’ as well as India’s first ‘Wildlife Wine’ as it is devoted to the conservation of tigers. The Kadu Winery is continuing the practice of offering wine tours and visitors can also taste six types of wines. Wine tours in Channapatna have become quite popular over the years among the tourists who want a relaxing experience. Many even travel from Bangalore to Channapatna just for a tour of the beautiful, magical vineyards. Wine tours can be booked online or by calling the winery directly at +91 9741798666 and booking the tour yourself. Payment for the tour is to be made once you reach the winery and the entrance fee is INR 400 per head. The winery is open on all seven days of the week between 10.30 AM and 5.30 PM. Tours are in batches of one hour.

A Hub For Artisans

The tradition of teaching the art of making Channapatna dolls continues to this day as artisans come to the city to get trained at the Artisan Training Institute, which also helps in marketing Channapatna toys. This is why Channapatna is known as a hub for artisans. Additionally, the city is also home to Channapatna Crafts Park, India’s first craft park where a crafts cluster of over 3000 traditional artisans are engaged in the production of lacquerware.

If you ever find yourself in Channapatna, the best thing you can do is travel on your own, with friends, or a guide and really immerse yourself in the culture and history of the city. The city is filled with artisans, many of whom work right out of their homes or have small stalls where they sell their works of art. Meet these craftsmen, speak to them and learn about their lives, their art, and the history of the place. Just walking around the town, watching the artisans making intricate toys out of blocks of wood is an experience in itself. Considering that Channapatna is a tourist hotspot, there are tons of small eateries where you can enjoy a nice quaint meal or snack to keep your strength up for the exploration. Pick up some Channapatna wooden toys while you are here as, not only will it support the artisans, but you will also be taking home a beautiful and truly exquisite piece of art.

Come For The Toys, Stay For The Culture

People generally visit this quaint city for a chance to see the famed toys, but as you have seen in this article, the city has much more to offer in terms of culture. Channapatna beckons those travellers who want to get the complete cultural experience. This is a great place to visit with your family or friends as there is something for everyone. You can also visit the nearby Ramanagara district, which has a lot of adventurous activities for the whole family.