Christmas is a time when people come together to celebrate with their families, and special Christmas dinners are a big part of that. Often rich and substantial, these traditional meals differ from region to region around the world.

If you’re wondering what to eat this Christmas, wonder no longer, as here are 21 Christmas dinner from around the world.

Also Read: 11 Delicious Christmas Sweets From Around The World 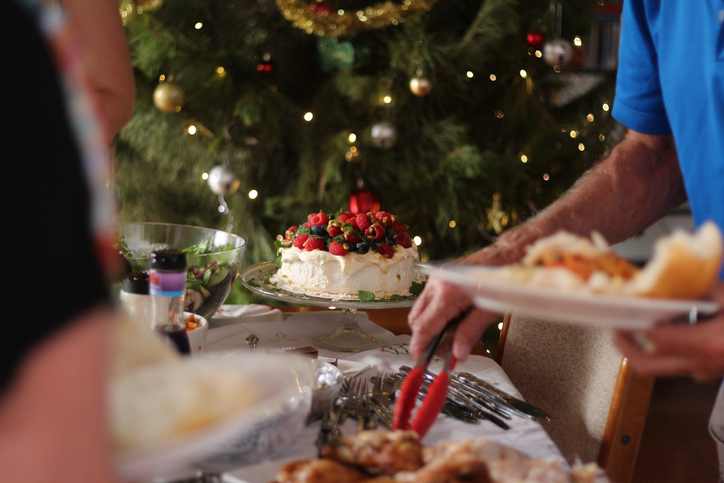 Once, traditional English-style roast dinners were popular Christmas fare in Australia, but in recent years, meat or seafood barbecues have become more and more popular; they’re the perfect way to avoid the heat of the oven as Christmas falls during the Southern Hemisphere’s summer. Sides include cold cuts, oysters, and salads, while dessert may be plum pudding, or the more popular pavlova (made with meringues, whipped cream, and fruits), all served with a cold beer.

Christmas dinners are quite a feast in Brazil. Held the evening of Christmas Eve, the meal usually comprises bacalhau (salt cod) fritters and farofa, along with bowls of colourful rice, sides of fresh vegetables, fruits and Brazil buts. Desserts such as lemon tart, nuts pie, rabanadas and panettone are popular. The meal is often accompanied by wine and apple cider. In Denmark, traditional Christmas meals must have flæskesteg (roast pork with crackling), along with sides of warm red cabbage, small caramelized potatoes, boiled potatoes, and plenty of gravy. Dessert is often risalamande, rice pudding with almonds served with cherry sauce. Everything is served with Ggløgg (mulled wine) and specially brewed Christmas beers.

Orthodox tradition in Ethiopia means that Christmas is celebrated on January 7 ( which is when Christ was born by to the Julian calendar). The festival is known as “Ganna,” and follows a 40-day advent fast that is broken with a feast on Christmas Eve. This usually includes doro wat, a meat and vegetable stew, chicken (that is carved into twelve pieces to honour the apostles). These are served with injera (a thin, spongy bread) and tej, or “honey wine.” 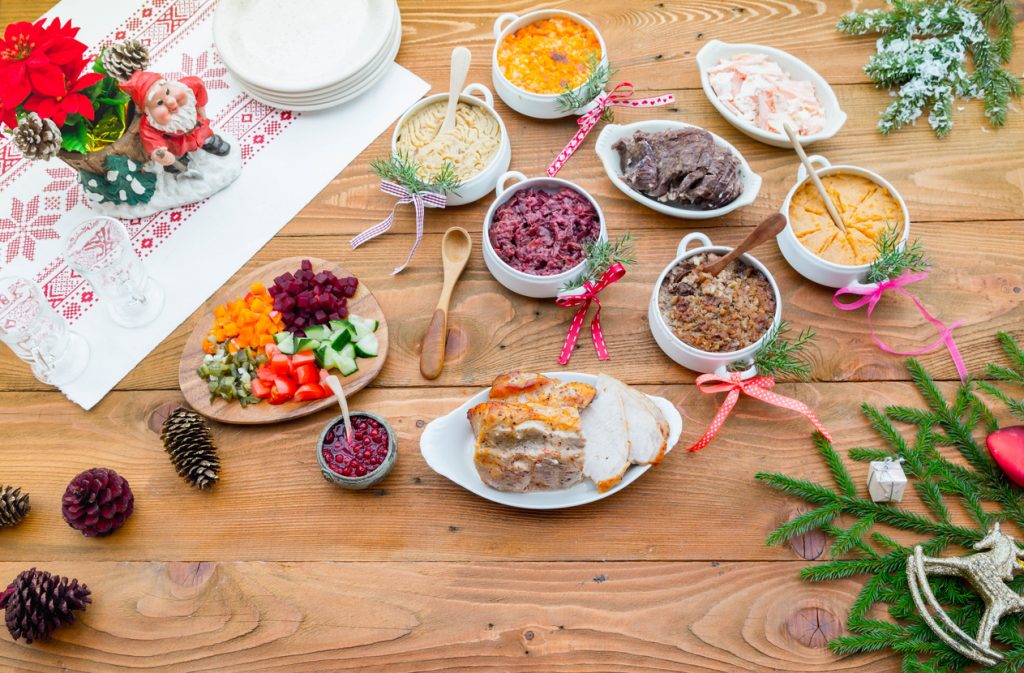 The Finnish enjoy a joulupöytä (literally, “Yule table”) that consists of an assortment of traditional foods and is similar to the Swedish julbord. The main dish is usually a Christmas ham, which is eaten with mustard. Other dishes may include lutefisk in butter and white sauce; pickled herring; potato, rutabaga, and carrot casseroles; rosolli, a cold salad; and various sauces. Beverages include glögi (or mulled wine), while for dessert there are gingerbread cookies, plum jam tarts, and kiisseli.

In France, on the evenings preceding Christmas Day, people hold a réveillon. They stay up until midnight and enjoy delicious meals. Appetizers may include lobster, oysters, escargots or foie gras, while the main dish is usually a turkey with chestnuts, and dessert consists of a Yule log (or a bûche de Noël). In Provence, 13 desserts are served. The meal is accompanied by wines and champagne.

The main dish at German Christmas dinners is usually roast goose and roast carp (though duck might also be served). Sides include roast potatoes, cabbage, Brussels sprouts, and sometimes a salad. These are followed by a variety of desserts, such as marzipan, lebkuchen (or spice bars), fruitcakes, and fruited breads such as Christstollen and Dresdener Stollen.

Christmas dinner in Iceland is eaten on Christmas Eve. Common dishes include roast game, (such as reindeer and smoked lamb, also called hangikjöt) or roast fowl (like duck or turkey), served with ham, herring, potatoes, peas, and cabbage. This is accompanied by laufabrauð (or “leaf bread”) made of thin sheets of fried dough, and malt og appelsín, a non-alcoholic drink that’s a mix of malt and orange sodas.

Italy is famous for its delicious Christmas food, which differs quite a bit between the Northern and the Southern regions. People hold a dinner on Christmas Eve, before midnight Mass, as well as a one on Christmas Day. The meals start with a primo which is usually a pasta-based soup, followed by a secundo. In Northern Italy, this might be stuffed poultry with a sauce, while in Southern Italy, it is seafood-based, like fried capitone eel. On Christmas Day the seafood is usually swapped for meat-heavy dishes like lasagne alla Bolognese and braciole.

Jamaican meals include rice and peas, which is served with Christmas ham or curry goat, fried chicken and roast beef. Sides include baked macaroni and cheese, fried ripe plantains, and potato salad. The food is accompanied by sorrel and white rum.

Though Christmas may not be widely celebrated Japan, Christmas dinner is still pretty special. Thanks to a festive marketing campaign in the 1970s, Kurisumasu ni wa kentakkii (or “Kentucky for Christmas”) has become a firmly established holiday tradition. Families from all over the country head to their local KFC for some festive fried chicken. Japan also has a special Christmas cake, a white sponge cake covered with cream and strawberries.