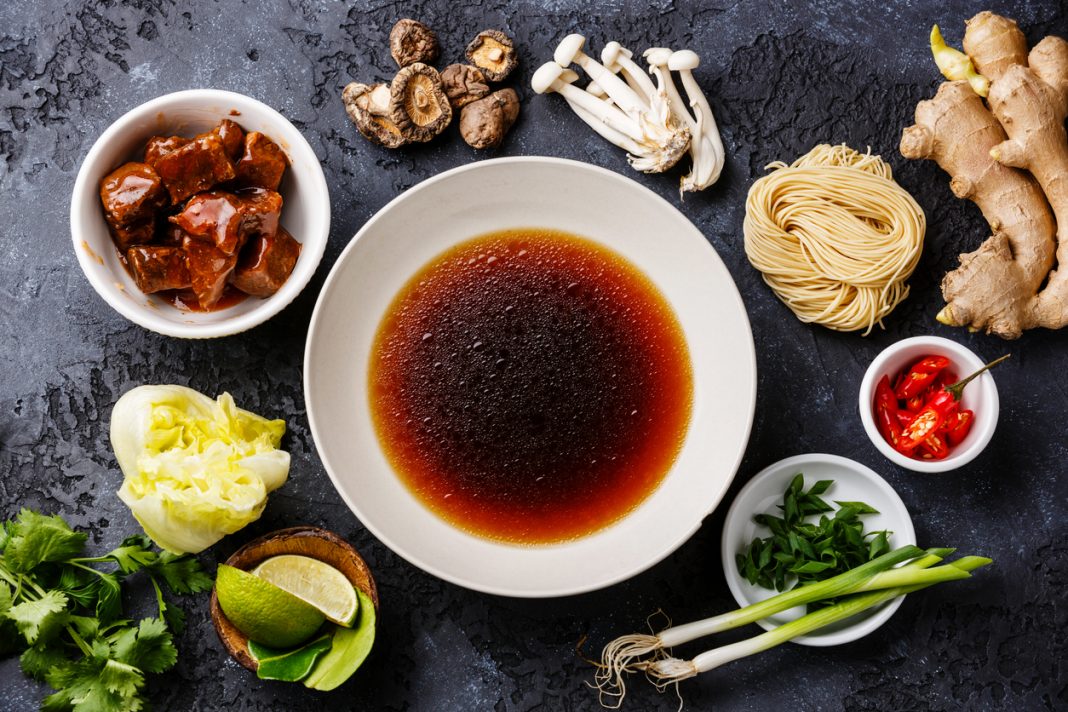 Ramen is not just a noodle dish in Japan; it’s a way of life! When ladles of piping hot broth meet silky perfectly cooked noodles, true magic happens. It is one of the most popular dishes not only in Japan but all over the world. It has that intoxicating allure when it arrives at your table steaming hot, asking you to take that first giant slurp!

Originally a Chinese dish, ramen was once just a labourer’s supper but now has been featured in many Japanese restaurants and events, as well as in anime and manga. And today, most regions in Japan make their own unique variations with different broths, noodles, seasonings, and toppings of their own ramen. But let’s not go down that (very confusing) road and just focus on four major types of Japanese ramen, decided by the tare, or base flavour:

Sea salt (or “shio“)is the oldest form of ramen seasoning; and it has been used for decades to make ramen broth. The broth is prepared by boiling down chicken or pork to create the base. While the broth has characteristic transparency, you can still identify it by its extremely salty flavour, as well as its clear yellow colouring.

This ramen has a light flavour and is typically served with a lot of seaweed. Anyone who has issues with sodium should avoid it as obviously it contains a lot of salt.

This rich flavourful version of Ramen is made with Japanese soy sauce and hence can be easily recognized by its darker colouring. Shoyu Ramen’s clear brown broth is also based on a stock made from chicken bones (“torigara”), seafood, and occasionally pork bones (“tonkotsu”) or beef.

Soy sauce is added next, resulting in a soup that is tangy, yet still fairly light on the palate. This ramen usually has curly noodles rather than straight ones and is served with all kinds of toppings; including marinated menma (bamboo shoots), green onions, ninjin (carrot), kamaboko (fish cakes), nori (seaweed), boiled eggs, and bean sprouts.

Soy sauce ramen is a popular variation in Tokyo in particular, and should not be missed if you visit!

Tonkatsu (which literally translates to “pork bone.”) is a boiled pork bone broth that is thick and cloudy white in colour. The bones are boiled on high heat for up to 20 hours, and this – together with the pork fat – creates the unique colouring and creamy consistency. It also suffuses the broth with a hearty pork flavour.

Miso ramen is a relatively younger form of ramen; it gained popularity only in the mid-1960s in Hokkaido. Unlike the others, Miso Ramen has a nutty and slightly sweet flavour. This unique flavour comes from a broth that is made with miso, oily chicken or fish broth –and sometimes with tonkatsu or lard – to create a thick and very hearty soup.

This ramen broth tends to be quite robust, so it stands up to a variety of unique toppings such as spicy bean paste or tōbanjan, sweet corn, leeks, onions, bean sprouts, stir-fried pork belly, cabbage, sesame seeds, white pepper, and chopped garlic. The noodles are typically thick, curly, and slightly chewy.

Tsukumen is a popular variety of ramen, where the noodles and broth are served separately. It is eaten by dipping the noodles in the broth, and the dish was invented by Kazuo Yamagishi, a restaurateur from Tokyo, in 1961.

The noodles are usually served cold, while the broth is hot. The broth itself is much thicker and has a more intense in flavour, which is perfect for dipping. The toppings are also served on the side, and may include nori, chashu, menma, tamago and boiled eggs.

Also Read: Different Regional Ramen In Japan That You Have To Try!

So grab your chopsticks and do let us know about your favourite type of Ramen in the comments below!