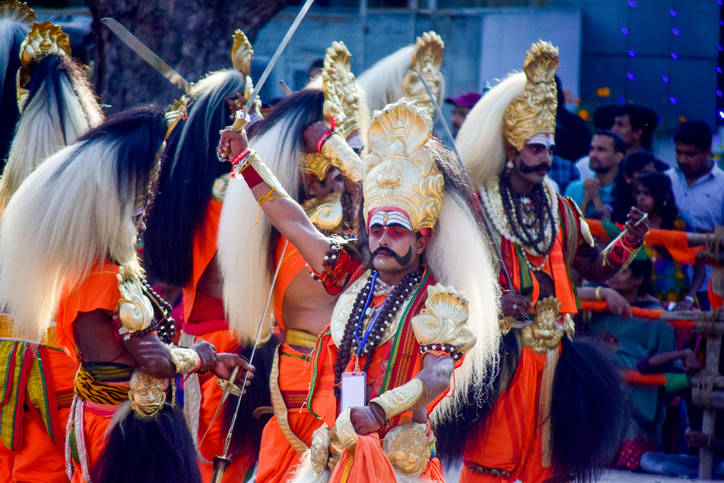 Mysore is a beautiful city at all times of the year. Dotted with magnificent palaces, heritage buildings and quaint lanes, it’s a visual treat for the visitor. But come festival time, the city takes on a completely different avatar. Usually, it seems almost asleep, but during the festivals in Mysore, the whole place comes alive. The city and its people celebrate the festivals with great pomp and splendour. A visit to Mysore at this time is a visual and sensory delight that can never be forgotten. Here is a list of the festivals in Mysore that you should definitely be a part of.

Festivals In Mysore Not To Be Missed

1. Mysore Dasara: The Celebration Of Victory Of Good Over Evil

The Nadahabba (state festival), also called Mysore Dasara, is the grandest of all festivals in Mysore. The 10-day long festival, which takes place in September or October, is celebrated with great pomp and grandeur. The celebrations start with the nine nights of Navratri and end on the tenth day called Vijayadashami. The Hindu festival celebrates the victory of good over evil. In Mysore, it is considered to be the day that the goddess Chamundeshwari killed the demon Mahishasura.

According to tradition, the Mysore royal family worships the goddess Chamundeshwari in her warrior form. All the implements and animals employed during wars, like weapons, elephants, horses, and the royal sword are worshipped. The festivities are kick-started with a ritual puja by the reigning Wadiyar king and other members of the royal family. The celebrations include athletic competitions, singing and dancing concerts, fireworks and bike parades. The kushti spardhe (wrestling competition) is one of the major attractions of the Mysore Dasara, which attracts wrestlers from all across the country.

The Dasara Exhibition is another big attraction of Mysore Dasara. The exhibition was started in 1880 by Chamaraja Wadiyar X to introduce new developments to his people. Today, the exhibition has various stalls selling clothes, plastic items, kitchenware, cosmetics and different kinds of food. The exhibition also has a play area and an amusement park with a Ferris wheel and several other rides.

The main attraction of the Mysore Dasara is the grand procession, also called the Jumbo Savari, on the city streets. The procession includes decorated elephants, horses and camels with several colourful tableaux, dance groups and music bands. The highlight of the parade is the idol of the goddess Chamundeswari, which is placed inside a golden howdah and carried by the lead elephant. The procession ends at the Banni Mantapa with a puja to the banni tree (prosopis spicigera), followed by a torchlight parade.

Like the Mysore Palace, the streets of the city are bedecked with thousands of lights, turning Mysore into a fairytale land. The people of Mysore also decorate their homes with colourful rangolis and flowers and perform pujas at home. The Gombe Habba or Dasara Gombe Puja (doll festival) is a tradition that is observed by most Hindu households. According to tradition, various dolls made of clay or wood are placed on a stepped platform. These dolls usually are small idols of Hindu gods and goddesses along with dolls of kings and queens and other human beings belonging to different professions. The dolls representing a shopkeeper and his wife are a must on this platform. Some displays also include famous personalities including freedom fighters, politicians and cricketers. The Gombe Thotti (doll’s pavilion) in the Mysore Palace has the most extensive collection of dolls from the 18th and 19th centuries.

The Vairamudi Brahmotsavam is the annual festival of the Cheluvanarayana Swamy temple in Melkote, in Mandya district. The 13 day-long celebration usually takes place in March or April annually, and attracts a large number of devotees. The main highlight of this festival is the procession of the idol of Cheluvanarayana Swamy wearing the vairamudi, the legendary diamond-studded crown. The idol is carried on a golden garuda along with idols of his divine consorts Sridevi and Bhudevi. Garuda is believed to be the vahana (vehicle) of Vishnu.

It is believed that the Vairamudi should not be exposed to sunlight, so the procession takes place at night and continues till dawn. A day before the brahmotsavam, Garudotsav is celebrated in MelkoteMelkote to honour the divine vehicle of Vishnu. The temples conduct various rituals on all 13 days of the festival. Teppotsava (the procession of the idol on a boat in the lake), Nagavalli Mahotsava (a puja to the snake god), and Gajendra Moksha (a prayer to the elephant god) are conducted during these 13 days. The entire temple is lit with lamps, making it a magical sight at night.

Ugadi, the Kannada new year is celebrated in March or April. The new year is an auspicious time that symbolises the beginning of a new age, bringing in good fortune. The festival is celebrated with great pomp all over Karnataka, and Mysore is no exception. The Hindu Kannadigas decorate their homes with colourful rangolis (colourful patterns on the floor) and torana (leaf and flower garlands hung on doors) made of mango leaves.

All the members of the family have a ritual oil bath and wear new clothes. They light a lamp in the house and pray for good fortune in the new year. They consume a special food called bevu-bella (neem leaves mixed with jaggery). The consumption of bevu-bella, coconut and raw mango is very symbolic. It is a combination of all the flavours—sweet, sour, salty, bitter, astringent and piquant. According to Kannada Hindu tradition, it is a symbolic reminder that life is not always sweet, that one must expect all flavours of experiences in the coming year and make the most of them. After the rituals, the families gather to feast on a special meal including obbattu (a sweet roti stuffed with a sweetened lentil mixture, also known as holige) and payasa (rice pudding).

4. Talakadu Panchalinga Darshana: The Festival That Occurs Once In Twelve Years

Once every 12 years, Talakadu town celebrates the Panchalinga Darshana festival. It’s a festival that celebrates five temples that represent the different avatars or faces of Shiva. The five-day festival is held on the new moon day in the month of Kartika according to the Hindu calendar. The days of the festival are chosen by the high priests of the temple based on the alignment of the stars. The festivities commence at the same time in all five temples.

The town of Talakadu and the temples are usually covered in sand. The sand is cleared and the temples are excavated every twelve years for the Panchalinga Darshana. The temples are decorated with plantain stalks and flowers. The priests take a ritual dip in the gokarna pushkarani (holy lake) next to the Vaidyanatheshwara temple. The idols of the gods are also bathed with the water from the holy lake. According to tradition, pilgrims take a ritual dip in the holy lake and worship the gods, Gokarneshwara and Chandikadevi. They then go to the Vaidyanatheshwara, Maruleshwara, Arkeshwara, Paataleshwara and Mallikarjuna temples and worship the gods. The pilgrimage ends on the same day with a visit to the Keerthi Narayana temple.

The city has made great leaps in development from the days of the old Wadiyar Kings. But Mysore hasn’t shed its traditions or heritage. The people still get together to celebrate the festivals of Mysore as one. And apart from these festivals, other regional, national and religious festivals are also celebrated with great pomp. The national festivals of Independence Day, the Republic Day and Gandhi Jayanthi are observed by the whole city. Other religious festivals like Makara Sankranti, Tula Sankramana, Ganesh Chaturthi, Deepavali, Christmas, Eid-ul-Fitr and Eid-ul-Adha are celebrated too. And everyone irrespective of their religion joins in these festivals in Mysore in harmony.