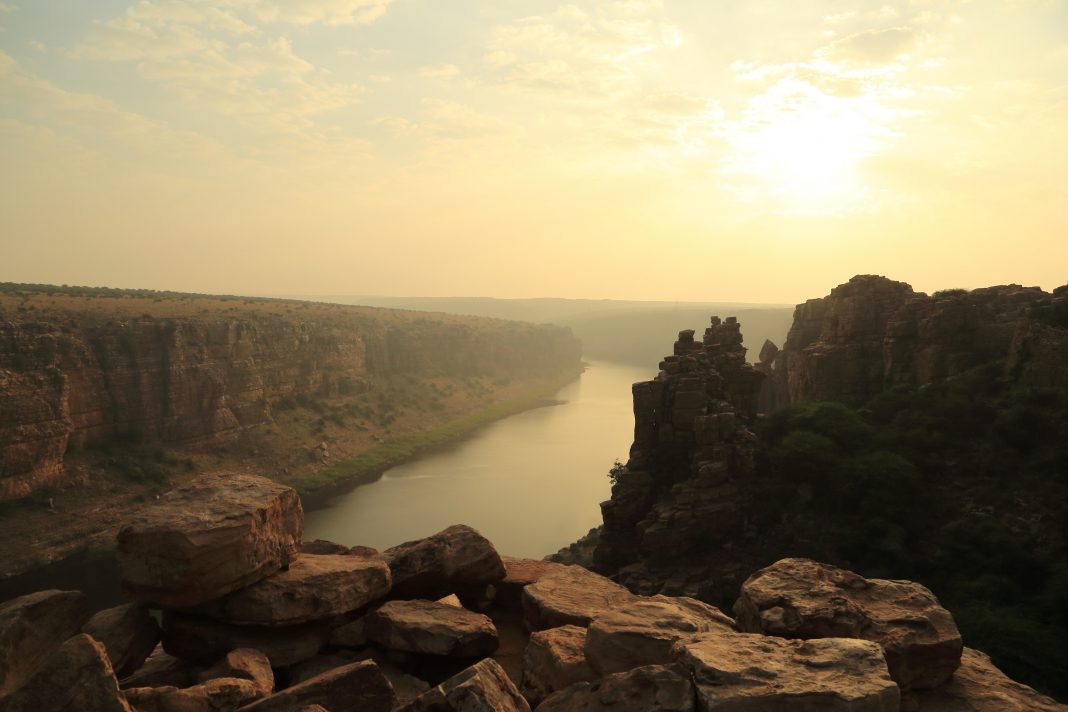 Grandeur and grace best describe Gandikota. Also known as the Grand Canyon of India, it has an ethereal beauty that makes even the Grand Canyon of Arizona, USA, go green with envy. Gandikota is a naturally formed gorge created by the river Penna. It passes through the Erramal la Hills in Kurnool district of Andhra Pradesh. A gorge is a narrow passage through the land with a stream running through it.

The continuous flow from the Penna river in Andhra Pradesh is believed to be the reason behind the formation of the steep and gorgeous Gandikota canyon. The river has sculpted the steep and magnificent canyon in India that stands strong. India’s Grand Canyon almost seems like it was handcrafted and carefully arranged, and not just the result of natural soil erosion. Gandikota is a small village located 15 km from Jammalamadugu in Kadapa District of Andhra Pradesh. The village is known for the majestic fort of the same name that sits above the gorge. Gandi means gorge and kota means fort in Telugu, thereby giving the gorge and village its name—Gandikota. Along with sculptural temples, the Belum caves (known for being the second largest cave in India), numerous lakes and springs, Gandikota is a surprising package of delights for travellers.

The Fort Of Glory And Elegance

The Gandikota Fort is a must-see if you visit the gorge. Built in the 13th century, it’s situated right beside the Penna river, making it an ideal spot for a picnic. This massive structure is made of red stone and has a five-mile perimeter wall around it. The walls of the Gandikota fort don’t just have elaborate carvings, they have also survived attacks from different kingdoms and witnessed a fair share of political strategies and troubles. The fort has hosted many kingdoms, starting with the Chalukyas who built the fort in 1123 AD. It was finally finished by Pemmasani Nayakas in 1370 AD. Furthermore, the Khiljis, Vijayanagara, Kakatiyas, and Qutub Shahis dynasties and kingdoms ruled it too. The fort is the crown jewel of the Grand Canyon of India.

If you love sunrises and sunsets, then Gandikota is the place to be. This is where you will find some of the best sunrises and sunsets you will find in the country. The sky over India’s Grand Canyon is extra special because it has one of the most beautiful views. The word ‘breathtaking’ may be an understatement when you watch the sky melt into orange and pink over this magnificent natural gorge and fort. The Ganikota fort is also home to a lake — the Rayalacheruvu lake was established by king Sri Krishnadevaraya of the Vijayanagara dynasty. The lake is also the right destination for bird watching. Sitting on its banks is enough to calm all your worries.

Also read: 8 of the most stunning forts in India

The fort also has two temples, the Madhavarayaswamy and Raghunathaswamy temples, as well as a mosque, the Jamia Masjid. Forts around India usually always have temples within them. But the Raghunathaswamy temple is one of the most different temples ever seen. Despite having intricate and extraordinary structures in the temple, what makes it special is that there are no idols in it. The pillars are elaborate and stand tall surrounding the temple, but they do not protect any idol. The Jamia Masjid is ornate with two minarets and complex structures. The multi-arched entrance stands as proof of the devotion of thousands of people. In India’s Grand Canyon these structures of both religions stand beside each other respectfully.

The Grand Canyon of India, Gandikota, is a miraculous work of nature. The gorge with the fort, river, lakes, and views is a treat for every kind of tourist. The photographer can capture the exquisite sights. The historian can delve deeper into its rich culture. The nature enthusiast can enjoy the lush foliage and rare birds. The adventure seeker can try rock climbing, trekking, and rappelling. The devotional tourist can drown in the allure of the temples and the mosques. Whether you want historical places, devotional places or locations for nature lovers, the doors of Gandikota are always open.

When To Visit The Grand Canyon Of India

The best time to visit Gandikota canyon is between September to February as the weather then is comfortable and pleasant. The summer months are hot and humid with the temperature sometimes soaring up to a good 40-45 degree celsius.

How To Get There

The nearest major airport to the Grand Canyon of India, Gandikota is located in Bangalore. It is at a distance of about 250 km, therefore if you desire to travel by air, you can take a direct flight from Hyderabad to Bangalore and then from there, you can either hire a cab or use public transport to reach Gandikota.

The region has a well-maintained road network, and hence can be easily accessed by road.

If you planning to take the train, the nearest railway station to Gandikota is at Jammalamadugu (18 km away) in the Kadapa district of Andhra Pradesh, Kadapa (77 km away), and Tirupati (219 km away). You can also take a direct train from Bangalore which will surely turn out to be more convenient and less tiring than a bus journey from Tirupati or Bangalore.

Things To Do At India’s Grand Canyon

Biking: The region is a famous getaway for bikers who cherish dashing through the wild jungle near Kadapa. The terrains provide a minor challenge for those who seek it along with beautiful scenery which unfolds as you ride along.

Night camping: You can scout for the best place in or around Gandikota from where you can witness the stars and the moon. Kickstart a serious BBQ party with your squad or take the time to catch up with long conversations or fun games. Please do take care to camp at the right spots and take your trash along with you when you leave. Refrain from loud noises and try to enjoy the sounds of nature instead.

Explore the caves: Plan a trip to the centuries-old Belum Caves which a must visit. It is known for its natural stalactites and stalagmites and the 11th-century Ahobilam Temple which is the holy abode of Lord Narasimha, an incarnation of Lord Vishnu. The caves might take a good two to three hours for you to wander while the temple will give you a good view of Nallamalla.

FAQs About The Grand Canyon Of India

Ganikota Fort in Kadapa district in Andhra Pradesh was initially built by the Chalukyas and then completed by Pemmasani Ramalinga Nayaka of the Pemmasani Nayakas.

What are the activities to do in Gandikota?

While enjoying the scenic beauty of the Gandikota canyon and fort, you can try rock climbing, explore caves and temples, camp under the stars, go hiking, go kayaking and even try birding.

Is camping allowed in Gandikota?

Where To Stay In Gandikota?

There are many hotels in Kadapa district that can help you plan your stay in or near Gandikota. Here is a list.

Which are the popular places to visit near Gandikota fort?

Some of the most popular places to visit near Gandikota fort are the Belum Caves, Yaganti Temple, Owk Reservoir, Oravakallu Rock Garden and the Kurnool Fort.