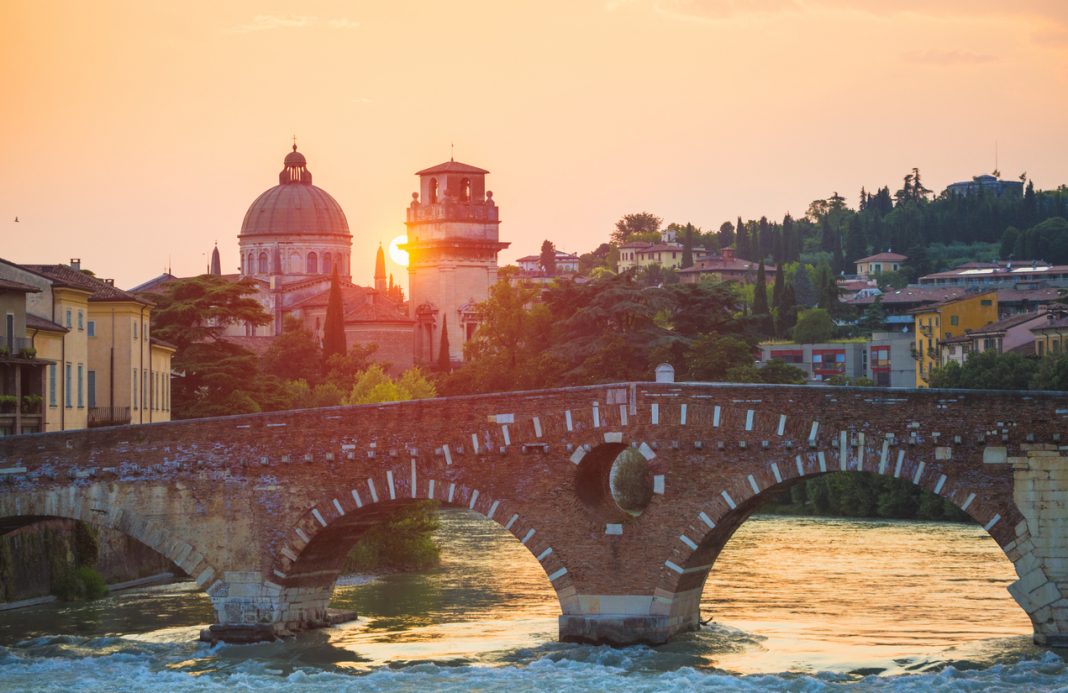 Italy is filled with historic cities, but “In fair Verona, where we lay our scene,” you get all the romance and beauty, minus the crowds. There are lots of things to do in Verona. This northern Italian city (made famous by Shakespeare’s tragic play, Romeo and Juliet) has thousands of years of history, featuring Roman ruins, medieval churches, and a vibrant modern gastronomic scene.

Located on the Adige river in Veneto, this city also has an abundance of great restaurants, bars and museums. With so many things to do in Verona, it can get a bit overwhelming; so, here’s a list if the best it has to offer.

Verona is said to have the largest number of ancient Roman ruins after the city of Rome itself. The most famous of these is the Arena, an open-air Roman amphitheatre. It dates back to 30 AD, and is built distinctive pink stone from Valpolicella. The arena is still used for all kinds of concerts and performances, as well as Verona’s summer opera festival.

This imposing 12th-century Romanesque basilica is known for its colourful early Renaissance frescoes and for its wonderful stained glass windows. However, the basilica is also built around a much older core, one that dates back to the 4th century.

The piazza in front of the basilica is famous for its weekly flea market. Each Sunday it bursts to life with a variety of stalls. They are filled with all kinds of curiosities, from antiques to furniture, books, jewellery, old postcards, secondhand clothing, and more. It’s the perfect place to discover hidden treasures.

Located at the end of Corso Porta Borsari (once the main Roman road of Verona) lies the remains of an imposing 3rd-century gate in the city’s original Roman walls. Its inscriptions date back to 245 AD. Nearby is the Arco dei Gavi (Gavi Arch), which was built in the 1st century AD. However, it was demolished by French troops in 1805 and rebuilt in 1932.

In a house that once belonged to the Dal Cappello family, lies the courtyard with a crumbling old balcony that is said to have belonged to Juliet, as well as a statue of Shakespeare’s famous heroine. While both the house and its most famous resident may be a bit more fiction than history (it was actually put in during a 20th-century restoration) it still manages to draw huge crowds each day.

Verona was once a city full of frescoes, mostly painted between the 14th and 17th centuries. However, as many began to fragment, they were moved to the former convent of San Francesco al Corso, which was eventually turned into a museum. The convent is also said to house the tomb of Juliet Capulet from Shakespeare’s Romeo and Juliet.

Verona, like most of Italy, is known for its delicious food. Apart from wonderful pizzas and seafood, there are also many local specialities to try, such as the delightfully dark risotto all’amarone, polenta, gnocchi, and baccala alla vicentina. Check out L’Osteria del Bugiardo and Osteria Carroarmato for hearty traditional fare, and La Fontanina for something with a more modern twist. Be sure to also try the amazing wines from the countryside surrounding Verona, especially the rich and intense Amarone.

Not to be confused with Verona’s much larger Roman amphitheatre (known as the Arena), this ancient Roman theatre dates back to the 1st century BC. It lies near the Ponte di Pietra (“Stone Wall Bridge”), another Roman landmark, and was renovated in the 18th century by Andrea Monga. Nearby is the city’s Archaeological Museum.

Built in the Romanesque style, this incredible church dates back to 1187. Its stunning 15th-century interiors are styled with pink Verona marble and are lined with paintings and frescoes by Renaissance greats such as Titian. The cathedral is also known for its Chapter Library, which is one of the oldest and most important ecclesiastical libraries in the world

The Piazza delle Erbe lies at the heart of Verona. It is surrounded by vibrant stalls, cafes, and gorgeous medieval and Renaissance architecture. To one end (near the Piazza dei Signori) is the Arco della Costa, which is known for the whale rib that hangs mysteriously from a chain under one of its arches.

Located just a few meters from the Piazza delle Erbe is the ancient Church of Santi Apostoli. Almost hidden behind it lies the Church of Sante Teuteria e Tosca, dedicated to the Saints Teuteria and Tosca. This small dark church was consecrated the 8th century, making it the oldest church in the Veneto region.

Set on the River Adige, this imposing medieval fortress once belonged to the ruling della Scala family. Restored by renowned architect Carlo Scarpa, it is now an extensive museum with displays of historical artefacts and works by artists like Rubens, Bellini, Tiepolo, Mantegna and Tintoretto. For more rt, you can also check out the Galleria d’arte Moderna Achille Forti.

Set behind the 15th century Palazzo Giusti (and near Verona’s city centre), the Giusti Garden was planted in 1580, and is regarded as one of the most beautiful Renaissance gardens in Europe. You can explore the weather-worn statues, greenhouses, artificial caves and even an 18th-century maze.

Originally built as a Benedictine monastery in 1046, it was later sold and mostly rebuilt in the 16th century. The marble facade is flanked by statues of St. George and St. Lorenzo Giustiniani; and the church itself is known for having Verona’s only painting by Paolo Veronese, the Martyrdom of St George.

Verona is a city that is famous for its opera, thanks to the annual Arena di Verona Festival. This slightly underrated museum in Palazzo Forti explores this rich culture with 7 sections of exhibits on operatic scores, letters from musical greats like Puccini and Verdi, s well as original costumes and sets from past performances.

Are there any other things to do in Verona that we’ve missed? If so, be sure to share them in the comments below.