More
Home Asia Here Is A List Of Things To Do In Darjeeling For Your... 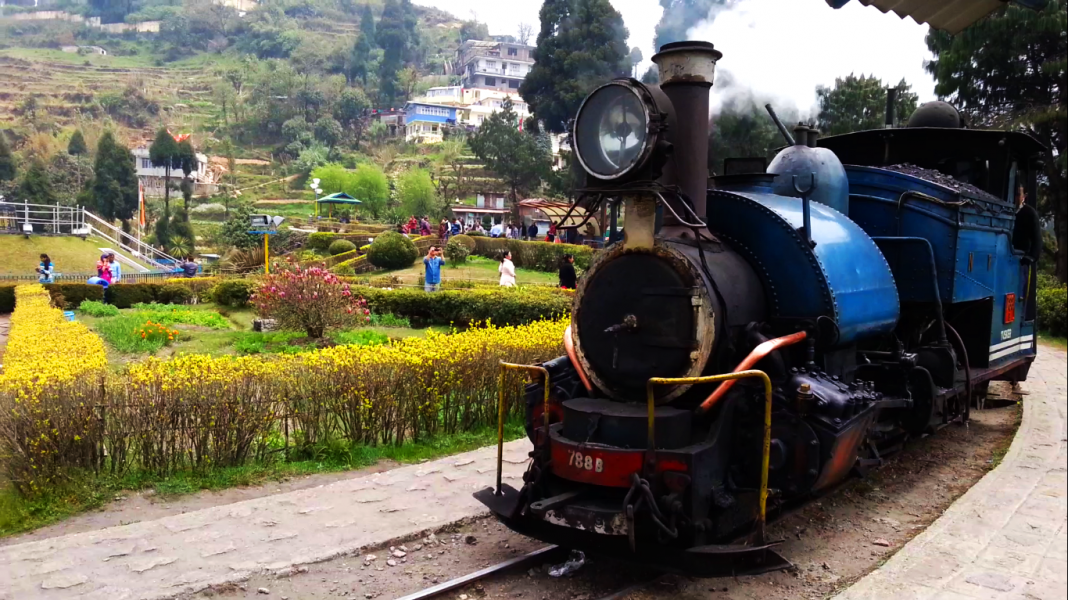 Consider waking up at an ungodly hour, braving the early morning chill, getting stuck in a traffic jam before sunrise, followed by an uphill walk to the watchtower, only to find it full and brimming with people. We are talking about the most famous tourist spot in Darjeeling—Tiger Hill. It is the highest point of the town, and promises a beautiful view of the sunrise along with the illuminated snow clad peak of the 3rd highest mountain in the world, Kanchenjunga. The allure of witnessing the popular Himalayan mountain draped in the morning twilight draws hundreds of visitors everyday to Tiger Hill. However, Darjeeling is much more than the usual tea estate selfie points and mountain sightseeing affairs.

The Darjeeling Himalayan Railway (UNESCO World Heritage) zigzagging through the narrow lanes of the venerable hill station is a sight to behold. The mountain railways of India are part of the UNESCO World Heritage Center. It includes three railways—The Darjeeling Himalayan Railway was the first. It is regarded as a stellar example of hill passenger railway. Opened in 1881, it is 88.48 kms in length of 2 feet gauge track connecting Darjeeling to New Jalpaiguri. The other two are the Nilgiri Mountain Railway in Tamilnadu and the Kalka Shimla Railway in Himachal Pradesh. These three are the epitome of human resolve to connect the mountain populations by building rail lines through rugged terrains and uneven topography.

It’s a unique experience to travel in the tiny four-wheeled steam locomotive dating back to the 19th century. The ease with which the loco maneuvers the curves, loops and gradients add to the traveller’s delight.

Commissioned in 1919 by the British, this 360-degree rail line loop is considered to be an engineering marvel. It was built to negate the sharp descent the toy train would have had to make when coming from Ghoom station (the highest railway station in India at 7407 ft. above sea level) towards Darjeeling. Located just below the station on a hill top, on clear days, it also provides unmediated and expansive views of the Himalayan peaks and sometimes the peak of Kanchenjunga.

At the centre, is the Gorkha War Memorial built in 1995 to commemorate the chivalry and sacrifices of the Gorkha soldiers who served the country. A three-metre-high bronze statue stands tall on a raised platform saluting a 30 ft. triangular shaped granite cenotaph which consists of the Roll of Honour (the names of the gallant soldiers) at its base.

This has to be one of the most impressive monasteries I have seen, purely with respect to its seemingly imposing structure perched on a hill top at a height of 7000 ft. above sea level. The mountain backdrop on one side and the beautiful hill cart road snaking below on the other, makes the place worth visiting. Also called the Drukpa Kagyud Monastery, it belongs to the Kagyupa order of Tibetan Buddhism. Built in 1971, it is the largest monastery in the region and houses more than 200 monks. A small coffee shop by the side is the perfect place to have a hot sip while soaking in the surroundings.

Built in 1972, the Japanese Temple, a two storeyed structure, is also known as Nipponzan Myohoji Buddhist Temple named after a Buddhist order for World Peace. In the same premises, is a beautiful dazzling white domed structure of the Japanese Peace Pagoda. It has a depiction of the Buddha in his four avatars (standing, meditating, sleeping and sitting). This is the usual pattern across all Buddha Peace Pagodas I have visited, but I had never seen such a rich deep golden hue in the Buddha statues anywhere in India. Located on Jalapahar Hill, this place exudes calm, and seemed like the perfect place to pray and meditate. I fortunately visited during the prayer time (4.30 PM) and experienced the resounding beats of a mammoth drum that is placed in the prayer room of the Japanese Temple. As per a monk, the drum is used four times a day during prayers—4.30 and 6.30 (both AM and PM).

The highest zoo of the country at 7000 ft. above sea level, spans across 67.5 acres of land, and houses some of the most exotic and rare animals of the Himalayas. Established in 1958, it received the ‘Earth Heroes’ award in 2014. This award was given by Royal Bank of Scotland in association with the British government in recognition of conservation efforts by the zoo. The park has done a spectacular job over the years in sustaining and breeding vulnerable, rare and endangered high altitude animals like the Tibetan wolf, red panda, snow leopard, clouded leopard, yaks, and Himalayan black bear etc. There are a variety of remarkable avian specimens like blue gold macaws, hill mynas, ring parakeets and many more. The park has also taken special care in conserving the flora with 200 species of trees and plants, shrubs, climbers and medicinal plants along with close to 60 varieties of orchids.

Do you remember Tenzing Norgay? The name we studied many times along with one Sir Edmund Hillary, the first people on Earth to conquer Mt. Everest. India built the Himalayan Mountaineering Institute as a tribute to Sherpa Tenzing Norgay to inspire, teach and motivate a generation of climbers. He became the first Field Director of HMI. The institute is a mecca for climbers with a large two-storey museum containing collections of amazing artefacts, historical exhibits of mountaineering, past expedition stories, and plenty of mountaineering paraphernalia. A wall in the museum is dedicated to badges of various mountaineering clubs from Germany, Austria, Switzerland, Iran and many more. HMI offers 16 scheduled courses in mountaineering and rock climbing with a dedicated residential school.

These offbeat experiences made me see a different aspect of Darjeeling—a quieter and richer experience, away from the busy commercialised humdrum of an overtly popular hill station. No matter how your experience goes, there will always be the perfect thing to end your day here—a good, steaming Darjeeling brew.