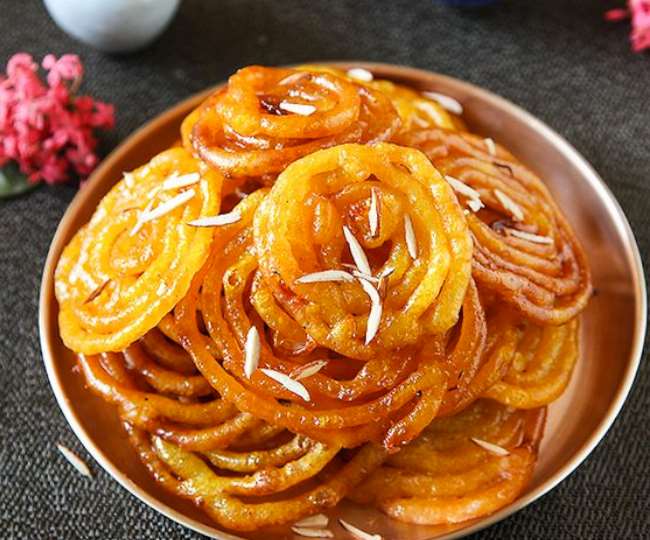 Crip, coiled and sweet, and a whole lot delicious, Jalebi is a sweetmeat loved by Indians all over the country. Though enjoyed immediately after been made in piping hot on a chilly evening it is undeniably delicious otherwise as well. It makes a perfect accompaniment for a plate of poori sabzi or just a with a samosa and a piping cup of hot chai. Though loved all over the country and enjoyed on various occasions, the Jalebi did not originate in India. So where did this bite of delicious goodness come from, lets discuss the origin of Jalebi shall we?

Let’s Start From The Beginning, Shall We?

The recipe for Jalebi is believed to be imported from its Middle Eastern counterpart Zalabiya or the Persian Zulbiya. The oldest mention of Zulbiya dates back to the 10th century in an ancient Persian cookbook called  ‘Kitab al-Tabeekh’ by Muhammad bin Hasan al-Baghdadi as well as in another 10th Century Arabic cookbook by Ibn Sayyar al-Warraq. Zalabiya was introduced to Indian cuisine during the medieval time and since then has become an inseparable part of various festivals. Priyamkarnrpakatha a fifteenth-century scripture written by Jain author Jinasura mentions how jalebi was popular in the gatherings of wealthy merchants and that’s how the transition from Zalabiya was mentioned for the first time.  Gunyagunabodhini of the seventeenth century another Sanskrit text lists the ingredients and recipe for making the sweetmeat, which is quite similar to its present-day preparation. Few ancient Indian texts also mention it as jalavallika or kundalika, a common dish served during weddings or other celebrations. So though not created in our country the recipe has journeyed and made itself a very integral part of our festivals and celebrations for many years.

Types Of Jalebi’s In India

Variety is the spice of life and in the case of Jalebi, it’s the sweetness of life. Depending on their taste, texture, and from which region of the country the Jalebi comes from, there are different types of this delicious sweetmeat.

Made out of the cottage, Paneer Jalebi has a lower shelf life and needs to be consumed within 24 hours, or else they go bad.  Found in West Bengal. Its ingredients include full cream milk, lemon juice, all-purpose flour.

Originated in North India but over time comfortable making its mark in the South is Jangri. Also called imarti, amreti it’s shaped like a flower and is prepared using urad dal making it a healthier option compared to Jalebi.

Jaleba is everything that a Jalebi has but king-sized. One single piece can weigh up to 250 gms and go up to 1kg and is deep-fried in the goodness of ghee making it a popular dish in the North of India. The jaleba of Gohana in Haryana is famous in particular.

Even it’s just an accompaniment, Rabdi with Jalebi deserves a special mention because of how delicious it is. Many sought after this delicious sweetmeat is garnished with saffron, almonds, and pistachios and is served as a dessert in North Indian weddings. This combination is delicious and will make keep wanting more.

Khoya Jalebi is prepared using a batter of khoya, maida, and milk and it tastes best when topped with cold milk or malai. This Jalebi is famous in Jabalpur, Madhya Pradesh.

Any delicious dish needs work and a certain level of expertise and it’s no different when it comes to making Jalebis. With more than 500 years of history in the recipe, this spiral-shaped delight is prepared with a batter made with all-purpose flour (maida), cardamom powder, and Kesar which is whisked well to a ribbon-like consistency. The thick batter is placed in a muslin cloth cone with a small opening at the end and is then squeezed to make spiral shapes in the wok filled with refined oil or ghee. Deep-fried to golden-brown colour, the spiral shapes are then soaked in the sugar syrup which sometimes may also contain hints of saffron, for the perfect orange hue.

Must Try For Every Sweet Lover

Though not from India, millions of Indians are glad that this delicious sweetmeat made its way here. Popular across the country, Jalebi’s are finger-licking good, trust us you will be licking the sticky syrup off your fingers as well. Served in almost any auspicious occasion, be it festivals or weddings Jalebis are a household favourite and loved by people of all ages. So whether is enjoying a Jalebi with Rabdi at your friends’ wedding or just enjoying it with a hot cup of tea and a samosa, this sweetmeat is not going to disappoint you. So head to your sweet shop and grab a few!!