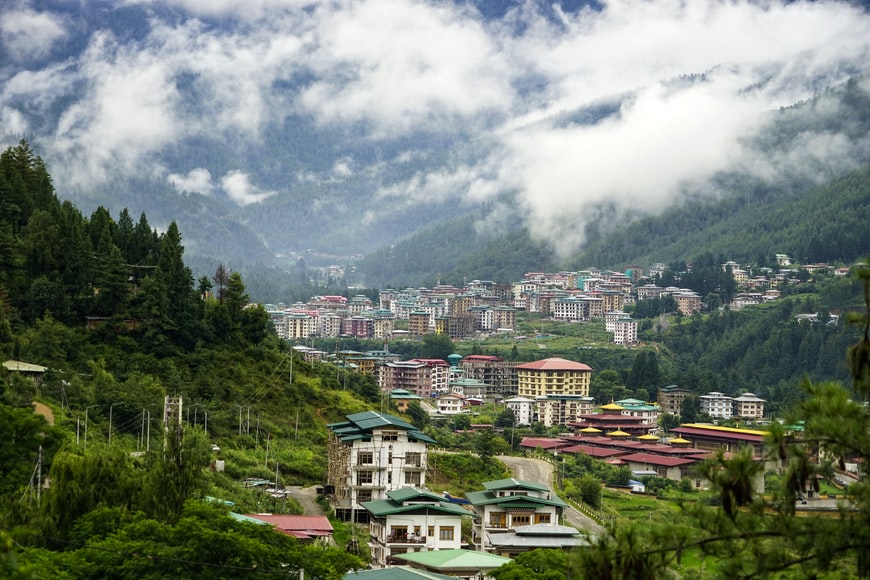 Surrounded by two giant countries, India and China the Kingdom of Bhutan is one of the most intriguing places you will ever visit. Covering many of the Himalaya range passes Bhutan is a tiny landlocked country in the Himalayas, shrouded in mystery and magic. Although state-controlled tours are possible, Bhutan has deliberately remained closed off to protect old traditions, the fascinating kingdom holds a great many surprises that you must visit to experience. Let’s get to know the facts of Bhutan that are interesting enough to make your jaw drop.

Here are some of the most amazing facts about Bhutan

The Only Carbon Negative Country In The World

One of the well-known facts of Bhutan is that Bhutan is the only carbon-negative country in the world, which means that it absorbs more carbon dioxide than it produces. Even though firewood collection and industrial development have been a pressing issue for the country as it has resulted in pollution and emission of about 2.2 million tonnes of carbon dioxide annually, Bhutan’s lush forests which have acted as carbon dioxide sponge by absorbing most of it away making the country carbon neutral. Travelers can enjoy the pristine nature when traveling across this beautiful country.

Bhutanese people know that unrestricted tourism can affect their unique landscape and culture, so when it comes to tourism they believe in what’s called “High Value, Low Impact Tourism. International tourists except for citizens of India are required to pay a minimum fee to visit Bhutan. It’s US$200 per person per night during the low season and US$250 per person per night during the peak season. This is the reason why Bhutan is one of the most exclusive travel destinations and a vacation here will not be budget-friendly. However, the fee covers everything from accommodation, food to transportation, entry fees, and a guide so it’s still money well spent.

People of Bhutan take happiness very seriously. The country does not believe in GDP as an indicator of economic growth and development. Though its one of the least developed countries in Asia, the government still prioritizes Gross National Happiness as their own measurement over Gross Domestic Product. Bhutan believes that being richer does not mean being happier. The term was coined by Jigme Singye Wangchuck, the fourth king of Bhutan in 1972 as he wanted to develop the nation’s economy sustainably. GNH stresses on living in harmony with nature and traditional values. There are four pillars of GNH,  sustainable and equitable socio-economic development, environmental conservation, preservation and promotion of culture, and good governance. In 2011, the United Nations introduced this idea encouraging its member nations to follow Bhutan calling happiness a “fundamental human goal”.

With an elevation of 24,836 feet / 7,570 meters, Gangkhar Puensum is the 40th tallest peak in the world that has never been climbed and Bhutan is its home. In the 1980s mountaineers attempted to climb the mountain but failed due to frostbite and high winds. Over the years teams from Britain and Austria have tried but have not succeeded.  In 1994 out of respect for the local spiritual beliefs, the Bhutanese government banned the climbing of any mountain higher than 19,685 feet / 6,000 meters. The Bhutanese believe that towering mountains are the dwelling places of spirits and they do not want them to be disturbed. , a Japanese team in 1999 was able to get a permit from China to climb Gangkhar Puensum but they had to revoke it upon the insistence of the Bhutanese government.

Only Eight Pilots Are Qualified To Fly To Paro Airport

Paro Airport is one of the world’s most difficult airports to land in and only 8 pilots are qualified to do so. Situated in a deep valley surrounded by mountains as high as 5,500 meters / 18,000 feet flights to and from Paro are allowed under visual meteorological conditions. Flying through the towering peaks and challenging vicious winds sweeping over the valley are what pilots have to face before landing.  Paro Airport is the only international airport in Bhutan and these 8 certified pilots bring over 30,000 people to this Himalayan kingdom each year.

Open to the outside world since the 1970s; the Himalayan kingdom has visitors amazed by its unspoiled culture. Like a paradise lost, Bhutan will let you experience a sense of mystery. From the moment you disembark from your flight, the fresh air and smiling faces of locals wait to greet you. The land is surrounded by majestic snow-capped peaks and lush forested valleys which makes a splendid backdrop to dzongs and monasteries. These monasteries host colorful tsechus or dance festivals where festivalgoers dress in medieval attire.

The Country Has No Traffic Lights

One of the most interesting facts of Bhutan is that throughout the country, you won’t find any traffic lights, not even in its capital city of Thimphu which is known to have heavy traffic. But despite having no traffic lights the traffic is managed efficiently.  This is thanks to the policemen who stand in booth-like structures in major intersections to direct and control traffic. They were once used for a day in Thimpu but were removed because the locals preferred the policemen and complained that the traffic lights were ugly.

Healthcare And Education Is Free

Bhutan provides free basic education and healthcare to all its citizens. It considers education a basic right for its residents and also understands how vital it is in achieving the nation’s social, cultural, and economic goals. The government doesn’t charge tuition fees and provides free stationery and textbooks to rural children. This has led the literacy rate to significantly increase over the past several decades. Bhutanese also have basic healthcare services at hospitals or health clinics. Free healthcare has led to a drop in infant mortality and an increase in life expectancy.

Also read: I Travelled For Adventure And Fell In Love With This Kingdom

One can never list enough reasons to visit the beautiful country of Bhutan. From its landscapes to its lush forests, magnificent food, and some of the friendliest people you will ever meet, Bhutan is a haven for travellers. Make sure this heaven on earth at least once in your lifetime. How many of these facts of Bhutan did you know about? Tell us in the comments section below: