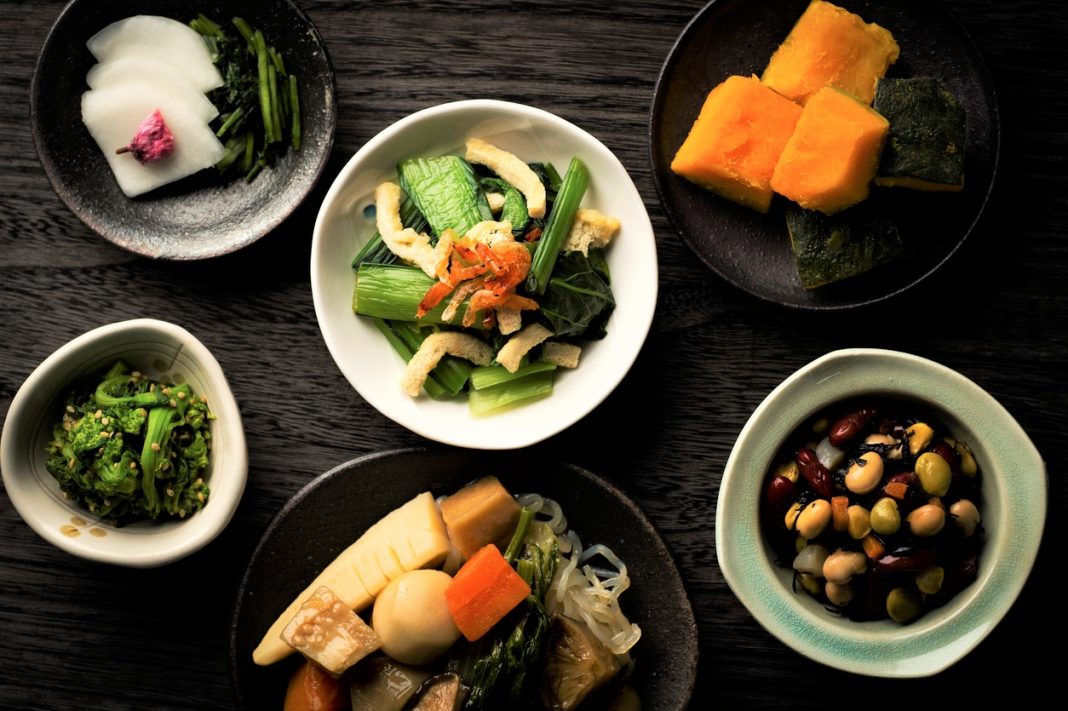 Japanese cuisine is one of the most popular in the world, and you can now find Japanese dishes across the world. The food often features a lot of rice, fish and meat, along with soybean products, and cooked and pickled vegetables.

Perhaps the most well known Japanese dish is ramen, but the country has lots more to offer, so here are 16 Japanese dishes you must not miss:

Also Read: Different Regional Ramen In Japan That You Have To Try!

Popular and Healthy Japanese Dishes You Can Try

Sushi is probably one of the most famous Japanese dishes. It is made with vinegared sushi rice and topped, or mixed with, seafood or vegetables. There are various forms of this popular Japanese dish, and it is often served with pickled ginger (gari), wasabi, and soy sauce. Sheets of black seaweed wrappers (called nori) may also be used as a wrap.

This portable and easy to eat meal consists of rice balls made filled with salty or sour ingredients such as pickled plums (umeboshi), dried bonito flakes, or tsukudani ;(meat or seaweed that has been simmered in soy sauce and mirin). It is then formed into a triangular or cylindrical shape and wrapped in seaweed.

This dessert is a rice cake made of a paste of short-grain glutinous rice moulded into shapes with water, sugar and cornstarch. Mochi is eaten year-round but is traditionally associated with the Japanese New Year. It comes in many flavours and with fillings such as sweetened red bean paste, white bean paste, or plums.

A soup made with miso (a thick paste of fermented soybeans), and a clear broth or stock and few solid ingredients, such as seaweed, vegetables or tofu, this is another iconic Japanese dish.

This popular dish is made of battered and fried fish, seafood, or vegetables which are eaten with a dipping sauce. The light batter is made with water and wheat flour and is said to have been influenced by Portuguese cooking techniques.

Zōsui is a mild rice soup that is made with pre-cooked rice and water or stock that is seasoned with miso or soy sauce. Other ingredients, such as egg, meat, seafood, vegetables or mushrooms may also be added.

This traditional Japanese dessert is a sweet porridge that’s made with red bean paste and can be of two types – one where the beans are completely crushed into a paste, and one where there is a mixture of paste and roughly crushed beans. Shizuko is usually served with mochi or rice flour dumplings.

This dish is made with chilled tofu topped with chopped green onions, dried bonito flakes, and soy sauce, though it may also have perilla leaves, daikon radishes, sliced or grated ginger and plum paste.

A thick jelly-like dessert that is made from red bean paste, agar, and sugar and formed into blocks that are sliced and eaten. Yōkan may also contain chopped chestnuts or persimmons.

Okonomiyaki comes from the words okonomi, or “what you want,” and yaki, or “grilled”, and that’s exactly what these Japanese pancakes are. A batter of eggs, flour, Chinese yam, and shredded cabbage, is topped with a variety of fillings, from vegetables and sauces to octopus, squid, to pork belly. It is then cooked and drizzled with Japanese mayonnaise and plum sauce.

These sweet Japanese dumplings are related to mochi; made from mochiko (rice flour) they are often served three to five on a skewer, with green tea. Ther are many different varieties such as the tree-coloured hanami dango, traditionally made during Sakura-viewing season, and mitarashi which is covered in syrup made from soy sauce and sugar.

Invented by a street vendor named Tomekichi Endo in 1935, this delicious Japanese dumpling is made with octopus, and a mix of various other fillings such as pickled ginger, green onion, fish shavings and Japanese mayonnaise.

Yakitori is made with bite-sized pieces of chicken that are grilled on a skewer over a charcoal fire. It is one of the most popular street foods in Japan and can be had either with sauce or dry.

A fish-shaped snack said to be a cross between a waffle and a cake, taiyaki is actually made from pancake batter, and filled with red bean paste, chocolate, sweet potato, cheese, custard, or even sausage.

These rice crackers can be either sweet or savoury and come in hundreds of different flavours, shapes and sizes. They are cooked over a charcoal grill and seasoned, though you can also find packaged senbei sold in stores.

So, have you tried any of these Japanese dishes? Which were your favourites? Let us know in the comments below!