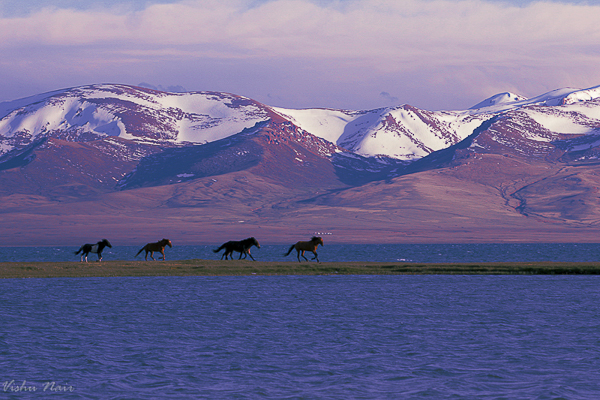 Kyrgyzstan a beautiful country isolated by high mountains in Central Asia. From first century BC the Silk Road from China, Samarkand and Tashkent crossed through Kyrgyzstan. The export of Horses cattle, wool and leather flourished  till the decline of the trade along the  Silk Route after the Mongolian invasion. Kyrgyzstan was under Russian rule till 1991 when it declared independence and established a democratic government of the Republic of Kyrgyzstan.

Bishkek the capital of Kyrgyzstan is a city of gardens, parks, and fountains. The nightlife in Bishkek is exciting with numerous bars and nightclubs that are open till the wee hours throughout the week.

The Manas International airport, named after the horse-mounted national hero of Kyrgyzstan is connected to many countries. The currency is Kyrgyzstani Som with an exchange rate of 1$ equalling 85 KGS.

This minaret of 25 meters stands lonely amidst the fertile fields of the Chuy Valley one hour away from Bishkek. Built in the 11th Century this was regarded as the model for other minarets. This tower originally 45 meters high would have been built as a lookout point or for prayer calls. The legend says that it was built by a rich Khan to keep his daughter safe from spiders as she was to die on her sixteenth birthday due to spider bite. As luck would have it on her 16th birthday the happy Khan went up to greet her with fruits and nuts and didn’t notice a spider hidden in the basket which gave her a fatal bite.

There is a small museum near the tower displaying, Cross symbols, Buddhist, Arabic and Zoroastrian artefacts which proves that all these religions coexisted peacefully.

One can also see stone memorials erected either for the dead ancestors or representing the enemies who were killed in battle.

Skazka Canyon is at Bokonbayevo, a village on the banks of Lake Issyk-Kul. This village acts as an administrative base for tourists who wish to travel to the mountains.

The canyon is a red sandstone landscape with strange and unusual rock formation and sculptures carved by wind and water. Hence it is also called the Fairytale Canyon.

It is a bit of walk up the hillside but worth it. The view of the deep blue Issyk-Kul lake from the top with the sculptures on the foreground is amazing.

Issyk-Kul is one of the oldest lakes in the world and te second largest mountain lake with a length of 180 kms and 60 Kms in width. It is belived that the lake is 25 million years old. It has a depth of more than 2000 feet and is surrounded by high mountains.

High in salt content this lake never freezes in winter and hence is a stop over for migratory birds.

Ancient days this lake was the favorite stop over along the Silk Road for caravans going to and from Far East to Europe.

Yurt is a circular sturdy tent that serves as the dwelling for the nomads. It is portable and made of flexible wood, wool, and felt. It is well insulated and heated by a metal stove which the hostess keeps filling with horse dung at regular intervals including in the middle of the night.

The Yurts are located on the scenic banks of Lake Issyk-Kul with a beautiful view of the lake and the mountains. One can go for a 3 or 5 days horse trekking to the mountains from the Yurt camp. The food served is mostly mutton or beef Plov, Noodle dish called Lagman, homemade cheese, cream, apricot/strawberry jam with homemade bread, and fermented horse milk to wash it down. The yurt stay is a must for any traveler who loves adventure.

However one should carry wet wipes, toilet paper, and hand sanitizer as there is no power or shower. The only luxury is a deep trench toilet away from the Yurt. Once in 3 days I drove down to the nearest town for a shower and to charge my camera batteries.

The roads end at the Yurt camp and thereafter all movements are on horse back. One can ride through the jailoos, the pastures where the nomads graze their cattle and sheep. Krygz are excellent horsemen and the start riding at a very young age.

A sheperd’s life is harsh and simple and cannot concieve without horses. They graze cattle and goats and breed horses which are sold for horse trekking. The horses also provide milk to make Kumis, fermented horsemilk. The horses are used to ride, to shepherd, to travel long distances, to hunt and in horse games like Kokburo. During the second day of the trek there was a storm ad we took shelter in an isolated Yurt. The owner served us Kumis and his wife and children sang outside to calm the animals.

These are traditionally bred horses which are smaller than other breeds.

Though small they are tough, agile and with adequate stamina to endure the mountains.

The is a symbol of the nomadic life and is used for riding, racing, games, shepherding and production of meat and milk.

Kokboru is also called the dead goat polo. The headless carcass of a goat is used in Kokboru. The goat is beheaded, disembowelled and soaked in cold water for 24 hours before play to toughen it. A goal is scored when a player manages to carry the carcass to a marked area despite the opponent’s efforts to grab it from him.

The players carry a whip mostly to ride off the opponent players and horses. Player may carry the whip in the teeth if he has to use both hands to control the horse and snatch the carcass. There are 3 chukkers of 20 minutes each with a break of 10 minutes between each chukker.

Oodarysh is horse-mounted wrestling. Oodarysh in Kyrgyz means “Take him down” and the players literarily try for it.  The aim of the player is to wrestle and push the opponent off the horse with bare hands unlike the knights on a duel with lances. Unlike wrestling on an arena where the player needs to be a good horseman mounted on a biddable horse.  Maximum points are earned if the player manages to dislodge the opponent by making him fall from his horse.

Hunting with the Falcons

Hunting with the Falcons is called the Salbuurun which was banned when the nomadic practices were wiped out during the Soviet rule. This hunting technique is slowly coming back with the freedom for the Kyrgyz to practice their culture. An essential part of the nomadic life was hunting for food and fur. The bird is caught when it is less than a month and trained by the trainer (berkutchi) with its eyes covered.

It may take 2 – 3 years before the training is completed and the bird is totally dependent on the Berkutchi. By then the bird develops a strong bond with the trainer, recognizes his voice, and is ready to obey his orders.

These lethal raptors kill their prey by holding them to the ground and breaking their neck. The primary kills are rabbits, wolves, lynxes, and foxes.