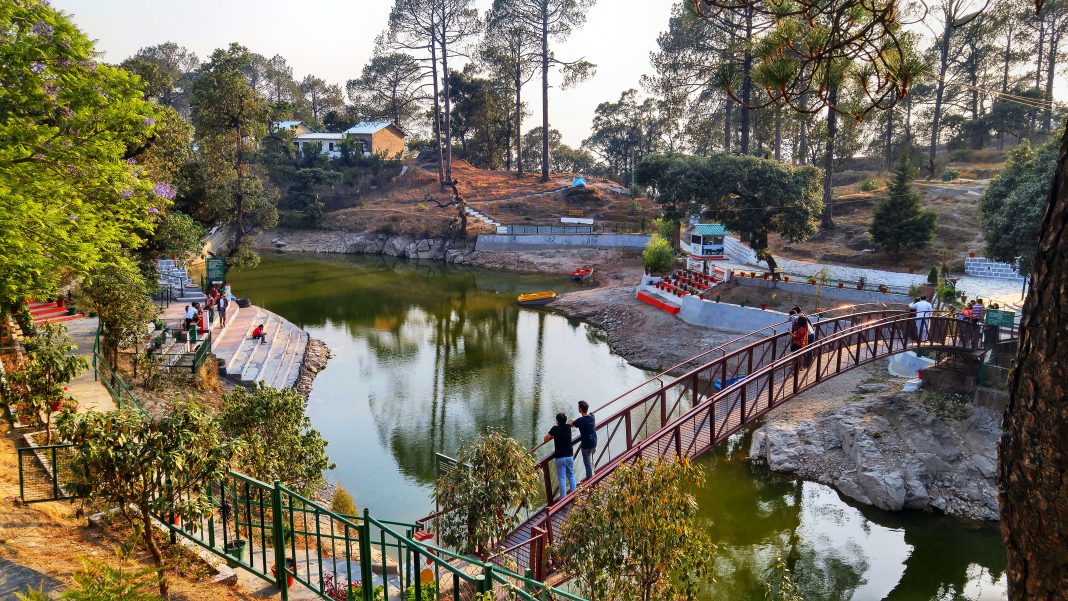 There are places in the world that demand leisurely discovery, hours of easy wandering, and poking into nooks and corners. The small hill station of Lansdowne which was set up as a British military settlement is one such place. It doesn’t have a list of must visit places. It doesn’t demand a lot of time to explore it. All it requires is loitering blissfully on its lonely roads, listening to the soothing mountain air, rustling of dead leaves and your very own footsteps.

It seemed like the perfect weekend getaway for three old pals looking for a quick getaway from the mundane quotidian routine of corporate life. Named after Lord Viceroy (1888-1894), Lansdowne is a small hill station surrounded by oak, silver fir, bamboo, and towering pine forests. An army cantonment, the place has its share of commercialization owing to its proximity to Delhi and easy accessibility.  However, the crowd is concentrated in some pockets only, and there are many charming trails and walkways to loiter around soaking in the soulful mountain air.  If you want to do more, there is plenty to see and do.

More than the revered temple, what struck me were the sky-high towering deodar cedar and pine trees here. Creating a canopy, sunlight barely manages to seep through these gentle giants. Located an hour’s drive away from Lansdowne in the Tehri Garhwal district, the temple is considered extremely auspicious. Considered to be one of the oldest siddha peethas of India, the small Shiva temple stands at a height of approximately 2000 ft. The premise and the path leading to the temple is replete with bells (apparently donated by devotees). The surrounding area has several beautiful green pastures for devotees to rest and soak in the verdant ambiance.

Moving a boulder with your finger at Bhim Pakora

I wouldn’t have believed it if I hadn’t done it. Two boulders seemingly so precariously placed yet balanced so perfectly by nature, that you can push the top boulder with your finger and feel it moving! That doesn’t mean that if you push it with both hands, it will fall down. It is a thirty minute-walk on a dusty path from Gandhi Chowk in Lansdowne. Legend has it that the Pandavas (from Hindu mythology) halted here for a brief period and Bhim (the strongest brother) placed one stone on the other.

Maintained by the army, it’s a small manmade lake and a popular picnic spot in Lansdowne. Boating along with a few ducks in ‘duck shaped’ boats was a fun experience. The surrounding garden is well maintained and the atmosphere is calm and serene. The premises also houses a children park, fountains, a souvenir shop, a small enclosure of rabbits, a café and a herbal plant nursery. I would recommend a few hours for exploring the beautiful surroundings.

Usually heavily crowded, as the name suggests, it is one of the best vantage points in Lansdowne to see the surrounding peaks of the Garhwal Hills amidst the crimson sunset sky. On clear winter days, one can also see the snow peaks of the majestic Himalayan range. A ten minute-drive from Lansdowne, it has several eateries and cafes along the path to the view point. During sunset, the place gets filled up. I tried my best not to get hit by over enthusiastic tourists wielding their selfie sticks.

Another revered temple of Shiva, Kaleswar Shiv Mandir is famous for housing a shivling which is swayambhu (self-formed). Built in 1901, this place was considered to be a home for meditating hermits and sages and several legends are associated with the same. Based at the foothill of the small hillock, it is surrounded by lush green vegetation. Maintained by the army, it is the oldest temple of Lansdowne.

Built in 1937 in typical colonial architecture, it is the only functioning Roman Catholic church of Lansdowne. The only other, St Mary’s Church, has been converted to a museum after years of disuse. St. John’s Church is built in a beautiful setting on the bend of the road near Tip n Top vantage point. I remembered a bigger and imposing version of this structure in Mcleodganj (Himachal Pradesh) by the same name. Like its counterpart, this church also emanates an extremely calm and serene atmosphere to the extent of it being a bit eerie.

The Garhwal Rifles regiment is stationed at the Landour cantonment. The museum is built in honour of the historical achievements of the regiment’s soldiers over the decades. A beautiful two storey building describes the origin and history of Garhwal Rifles with a plethora of exhibits consisting of arms and ammunition, photographs and other war paraphernalia. The museum is named after Darwan Singh Negi, the second Indian soldier to receive Victoria Cross, the highest and most prestigious award for bravery and chivalry in the face of the enemy. Photography is strictly prohibited inside the museum.

Not heavily commercialised like its other popular counterparts in Uttarakhand, Lansdowne exudes an innate charm and sublime character which brings joy to the solitude seeking traveler.  Its proximity to Delhi makes it the ideal destination for the perfect weekend retreat.

Road: It is a 6 hour drive from Delhi.

Rail: Kotdwar is the nearest railhead. Lansdowne is an hours’ drive from here.