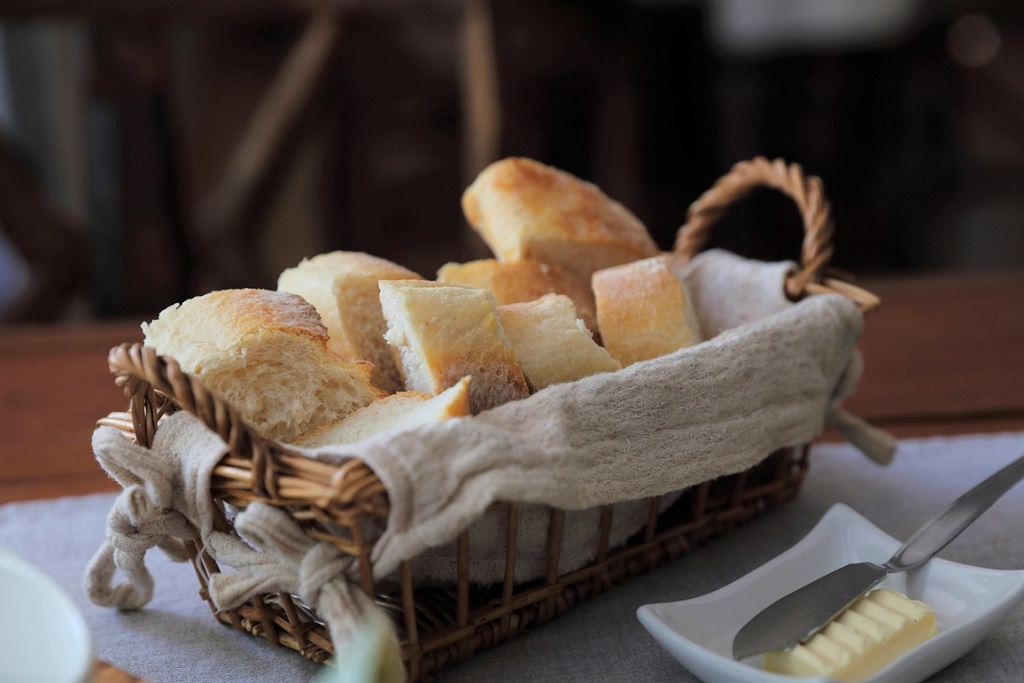 As I began exploring France and its bread, I have to tell you that I was a little overwhelmed. I had some 50 different names under “Breads of France” and I didn’t know how to make it a detailed informative article without confusing the reader (or even myself). Okay, but think about it for a second, 50 something types of JUST BREAD! It is true when one says that Bread isn’t just Bread for the French. It’s something else. It’s an institution. 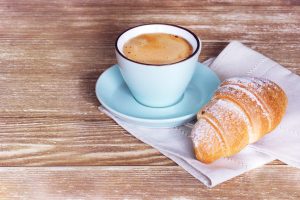 So here’s a list of French Breads that I have compiled, hoping they can help you with the when, the why and the how–of these French Breads:

Pain al’Ail – Okay, so breaking down the word will give us Pain, which means ‘bread’ and al’Ail, which literally translates to ‘With Garlic’. So, bread in France that is flavoured with garlic and then toasted will come in this category.

Pain au Froment– A bread made of Wheat Flour. The Bread made entirely from wheat flour will be “Froment 100%” while the ones which are mixed with other ingredients like maybe rye, spelt, etc, will be “Froment 75%”.

Pain Baguette– The most popular type of French bread, a Baguette is a long, thin loaf of bread. The standardized dimensions of a Baguette is 70 cms in length and 250 grams in weight.

Pain Baguette al’Ail– Similar to Pain al’Ail, this will be a toasted and sliced baguette.

Pain Batard– Very similar to Baguette but is shorter in size, yes, Batard is considered inferior to the Baguette. The name is generally used in boulangeries or bakeries in France that make their own bread, for any oddly shaped loaf of bread that comes out of the oven.

Pain Déjeunette– One-third of a full sized Baguette is a Déjeunette. The name suggests that it is enough for a petite (small) déjeuner (breakfast).

Pain Beurrée or Tartine Beurrée– A sliced baguette which is served in France with café au lait along with butter. It is to be noted that in French Cafés, Tartine Beurrée is on the breakfast menu and served with jam or marmalade on the side.

Pain Boule or Boule de Pain– Before baguette became famous, Boule used to be considered as the “French Bread”. This is a round loaf of bread.

Pain Blanc– France’s standard white bread. Shapes of Pain Blanc may differ to those at home.

Pain Brié– The traditional wheat flour bread from France’s Normandy Province. While this bread is made with butter which gives it a distinct taste, it has no connection with Brie (the cheese).

Tartine– It literally means sliced bread, tartines are usually open-faced sandwiches. While the ingredients of a tartine may vary from region to region and chef to chef, there is no fixed rule that all tartines are open sandwiches. 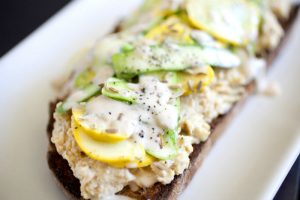 Pain de Mie or Pain Carré– While Pain de Mie literally translated to soft bread, Pain Carré means square bread. In France, this bread is most often sold sliced and is used for making sandwiches or for toasting.

Pain Campagrain– Quite a number of high fiber breads are sold under this name, but Campagrain bread uses two to five grains or more. While the grains used are wheat, malted corn, rye, oats, barley, etc, some bakers may also include sunflower, sesame and flax seeds. The shapes of this bread varies extensively.

Pain de Seigle or Pan Noir– Rye Bread made with different percentages of from the flours made with rye grain. While the main ingredient is obviously rye flour, the color will depend on the type of flour used or the number of colouring agents used in the process. 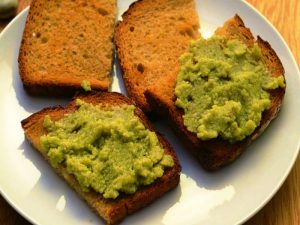 Pain aux Noix– Nut bread. This is one of France’s wonderful breads which are made with whole wheat and walnuts.

Pain Polaire, Pain Suédois or Pain Nordique– Translated as Polar Bread, Swedish Bread or Nordic Bread, this is a traditional flatbread with dimples that is made with rye flour. This bread is served with open sandwiches in France.

Pain Brioché– Though the exact recipe and the shape of the bread varies with different local traditions, brioché is made with added eggs, butter and a little sugar. Usually, it’s brioché which is chosen when a recipe calls for a bread stuffed with meat or pâté. Foie gras, fattened goose or duck liver are most often served with toasted brioché. 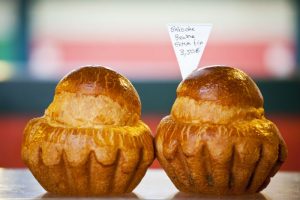 Pain Ficelle– a long thin loaf of bread which weighs around 125 grams, making it shorter and lighter than Baguette. The word ficelle translates to ‘string’ outside bakeries and supermarkets in France.

Pain d’Épice– In France, Gingerbread is appreciated like art as many of its producers are considered artists. Often French gingerbread will be studded with candied fruits and others may be on a menu when served with warm chocolate and or ice cream. Made with wheat, rye or mixed flours flavored with ginger and sweetened with honey, nutmeg, cloves, and cinnamon may be added depending on the tradition it is being made for.

Pain Beignets– A breakfast pastry in France Pain Beignet is French for Donuts. Nothing like its American counterparts, this is a square of fried dough eaten hot sprinkled with icing sugar.

Pain de Campagne or Pain Miche– With variety of recipes and shapes, French sourdough or country bread, may be made with standard wheat flour, whole wheat flour or mixed flours. One of the most traditional recipes of this bread is a combination of white flour with whole wheat flour and/or rye flour, water, leavening (baker’s yeast) and salt.

Pain au Levain– Sourdough bread made with a mixture of water and flour where it develops a culture of yeast and lactic acid bacteria.

Pain Doré or Pain Perdu– Translated as golden bread, this is another name for French toast. It is made with breads soaked in eggs + milk and then fried. 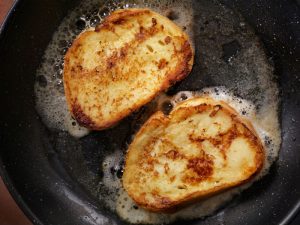 Pain Fougasse and Fougassette– Originated in the city of Nice and other surrounding villages, these traditional breads were formerly just crusty bread made of baguette dough brushed with olive oil and flavoured with orange zest. Now, the recipes of fougasse breads have changed beyond recognition—with a variety of shapes, sizes and flavours.

Pain Croûte à Potage or a Potage son sous Béret– The bread crust that is used to cover soup and as beret literally translates to cap, it is the head covering. These coverings are rarely, if ever, eaten.

Gros Pain– It is literally translated to Large Bread. It is traditionally sold by weight and different shapes and sizes.

Pain sans Levain, Pain Azymes, or Pain Juif– Crudely translated as bread without the “Levain” meaning unleavened bread. These breads are not prepared with the help of raising agents like yeast.

Petit Pains– Translated as “little bread or bread rolls” is France have different names, for each shape and each recipe used for the traditional bread rolls offered in restaurants or sold in supermarkets.

Well, this took ‘le pain’-fully long, am I right or am I right?

Just Kidding. Do let us know about your Baguette (and others) experiences in the comments below!