Why You Should Visit Mawlynnong, The Cleanest Village in Asia

In Eastern India’s Mawlynnong village, tidying up is a ritual that everyone- from tiny toddlers to toothless grannies take very seriously. This 600 person town in the East Khasi Hills of the Meghalaya region is known for its cleanliness. Apart from cleanliness, the village is also known for its high literacy rate (about 92%!) with a strong women empowerment scenario. They have really set an example for the other villages as well as cities of India.

Cleanliness is life for the people of Mawlynnong Village! They use functional toilets, there are bamboo dustbins all over the village, even the bamboo leaves fallen go straight into the dustbins. Plastic bags are banned. And surprisingly, these rules are strictly followed by all the villagers, otherwise, they are charged. That’s not all, Mawlynnong gets its manure from the converted garbage. Cleanliness of their house is not the only goal, but the people of  Mawlynnong walk out to sweep the roads and streets and retain their title of the cleanest village in India and Asia.

This village consists of locals from the Khasi tribe. The Khasi tribe follows a different culture from a majority of the rest of India. The children of the Khasi tribe get their mother’s last name, and the wealth is passed down from the mother to the youngest daughter of the family. The people are known to be extremely hospitable and are welcoming to tourists.

Things to see and do in Mawlynnong

The Living Root Bridges in the nearby village of Riwai (a few kilometres from Mawlynnong village) across the river are worth both the visit and the short 15-minute trek that it takes to reach them. Cross the beautiful streams over these living root bridges and witness the beautiful waterfalls. These bridges are made by connecting the aerial roots of massive trees with one another. There are living root bridges in several parts of Meghalaya, they are also accessible from Cherrapunji and is a definite bucket-list item. 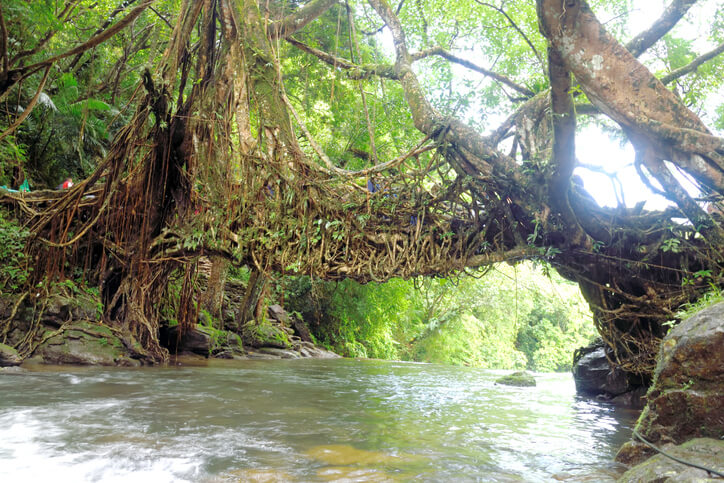 The local dishes of Mawlynnong are lip-smacking

The best part about the food of Mawlynnong is it is prepared from the organically grown vegetables. Some delicious lip-smacking dishes from Mawlynnong include Jadoh (a meat and rice delight) and Tungrymbai (meal of fermented soybeans, bamboo leaves, and local spices). Pork dishes are also really popular here and through most of Meghalaya.

The Balancing Rock of Mawlynnong

This is actually nothing more than a fenced-in spot where a rather huge boulder rests, quite well balanced, on a significantly smaller stone. They are referred to as ‘naturally balancing rocks’. While they are currently just a tourist site (mainly for having weathered many storms, rains etc while still remaining intact and perfectly balanced), they were earlier considered as a shrine by the locals Khasi tribes before they converted to Christianity.

You can enjoy the sky view from the viewing tower of Mawlynnong village which is 85 feet high and is made of bamboo. You’ll be overwhelmed by the breath-taking views at the top. You can also check out the landscape of Bangladesh as this Mawlynnong village lies on the Bangladesh border. The view tower only charges an exceptionally minor fee.

Mawlynnong waterfall is the perfect place to have a picnic with your loved ones. The sounds of the gushing water are perfect to break the silence of Mawlynnong. The waterfall is not in the village but is en route to Dawki, another beautiful town in Meghalaya’s valley.

Visit the Church of Epiphany

This church is 100 years old but still holds that old structure charm. The patches of red and orange flowers blossoming around it make the place scenic. The houses of Mawlynnong do not rise above the Church Spire.

Interestingly enough, it was after Christian Missionaries came to the village from Bangladesh, that the village got its current name of ‘Mawlynnong’ which means ‘Cluster of Stones’. Earlier the village was called ‘Ri Kharpangkhat’.

Incidentally, the villagers claim that it is these missionaries who instilled their current habit of cleanliness. The title of the cleanest village in Asia and India is something that they owe to those missionaries who visited them all those years ago.

Mawlynnong is blessed with pleasant weather all around the year. But, the best time to visit is the monsoon. The lush green scenery and the picturesque locations make the place scenic.

Tip: Do carry your jackets and umbrellas as rains in Meghalaya can be sudden, heavy, frequent and continuous.

How to reach Mawlynnong

By Road: The final leg for Mawlynnong has to be through road transport. Buses can be a good travel mode. You can use buses from nearby areas like Cherrapunji and Shillong. However, bus timings are a little infrequent in Meghalaya. So another better option is to hire a cab in Shillong or make a road or bike trip there using a rented vehicle from Guwahati.

By Air: The nearest airport from Mawlynnong is Shillong, 78 km from Mawlynnong. However, Shillong Airport is not too well connected to all the cities in India. Hence, Guwahati’s airport is the best option.

By Railway: Guwahati is also the nearest railway station, 172 km away in order to reach the village. Cabs and mini-buses are easily available right outside the station.

Where to stay in Mawlynnong

Mawlynnong mainly provides lovely homestay options. Or, you can stay in Shillong or Cherrapunji and make a day trip to Mawlynnong.

Thus, Mawlynnong is a must-visit place. One more added to the bucket list!

Also read: A Travel guide to Meghalaya, the land in the clouds