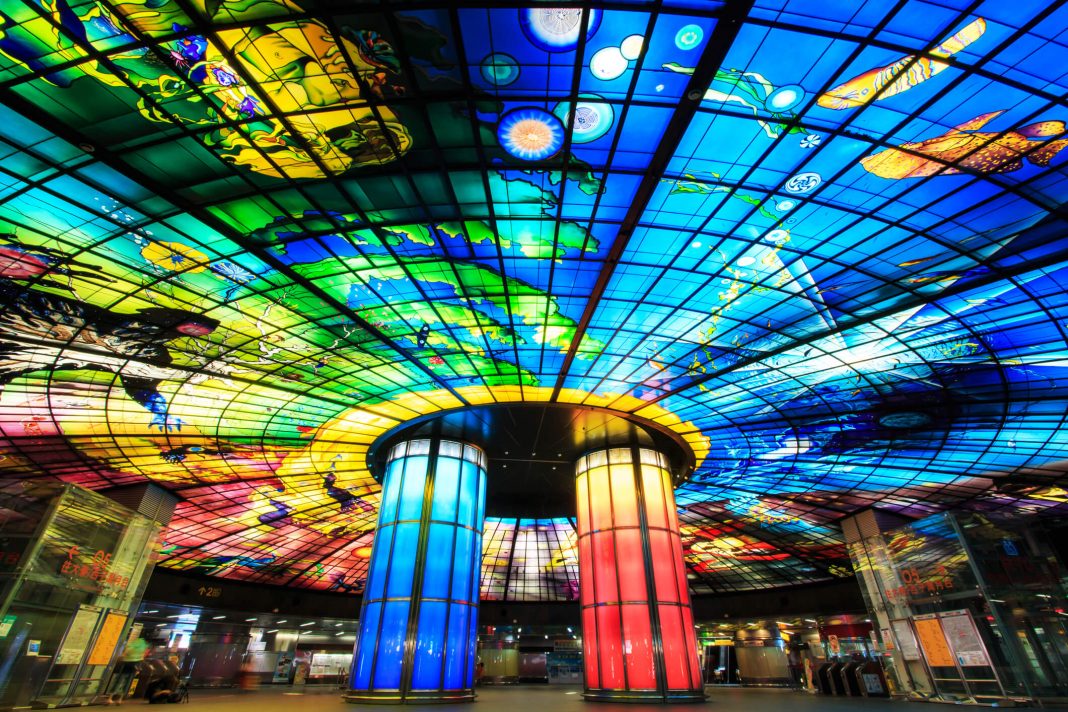 Train travel is one of the oldest forms of transport we still use today. The first point of entry for many visitors, train stations also often feature some of the world’s greatest architecture. From lavish neo-gothic behemoths to ultra-modern masterpieces, here are 22 of the most beautiful train stations from around the world.

Originally built between 1895-1905 by King Leopold II, the opulent neo-Baroque Antwerp Centraal Station has over 20 types of marble and stone and is said to be one of the most beautiful train stations in the world. Often dubbed the Railway Cathedral due to its monumental size, the station was designed by the Bruges architect L Delacenserie. It’s impressive glass and iron ceiling survived the bombs of WWII, as did the stunning antique clock. However, six of its eight towers were destroyed in the 1950s and reconstructed in 2009.

Madrid’s first, and largest, station, the most striking feature of Atocha station is the lush tropical greenery growing on the main concourse. Originally built in 1851 by Alberto de Palacio Elissagne, with help from Gustave Eiffel, a fire necessitated the building of a more modern adjacent terminal in 1992.

Built by Cornelius Vanderbilt in 1871, Grand Central is the largest of beautiful train stations in the world. Its magnificent gold chandeliers, popular restaurants, and antique gold-barred ticket windows all pale in comparison to the aquamarine ceilings decorated with gold-leafed signs of the zodiac. However, Grand Central is full of fascinating secrets, which even include a secret tennis court.

Commissioned for the 1900 World Exposition, the Gare de Lyon is an excellent example of period architecture, with impressive Beaux-Arts details. It serves all trains that head to the south and West of France, as well as Switzerland, Italy, Germany, and Spain.

The fusion of East and West in the palatial Gothic exterior of the erstwhile Victoria Terminus was designed by British architect Frederick William Stevens to honour Queen Victoria, Empress of India. Inspired by St Pancras, it was used as a symbol of Bombay’s place in the British Empire. Now a UNESCO World Heritage Site, over 3 million commuters pass through it each day.

This massive red-brick Victorian station was built over 20 years. Upon its completion in 1868 it was the largest enclosed space in the world. It survived the worst of the bombs during the Blitz of WWII and was a meeting point for Allied soldiers. Today it also serves as one of Britain’s gateways to Europe.

Famous for its exquisite blue and white azulejo tile mural by artist Jorge Colaço of scenes from Portuguese history, it took 14 years and 20,000 tin-glazed ceramic tiles to create. The exterior of the São Bento Station was inspired by Parisian architecture.

One of the most imposing buildings in Mozambique’s capital Maputo, the beautiful CFM Railway Station is a remnant of Portuguese colonial rule. The mint-green-and-white building was designed to resemble the works of Gustave Eiffel, and the man himself may have even worked on the building.

First opened in 1890, the Kanazawa Station became famous in 2005 when its modern tsuzumi gate entrance was unveiled to mixed reviews. Known for its preserved samurai quarters and geisha district, the station has come to represent the fusion of modern technology with traditional forms.

This ornate, Flemish Renaissance-style station was the brainchild of architect George Troup, earning him the nickname “Gingerbread George”. Its distinctive patterns of Kokonga basalt, white Oamaru stone, and pink granite have made it one of the beautiful train stations and a regular tourist stop since 1906.

Originally built in 1862, the Helsinki Central station was too small. The current Art Nouveau design by Eliel Saarinen was the winner of a 1904 contest to design a larger station. Completed in 1919, it features four sentry statues holding spherical lights on either side of the entrance.

The main railway station of Metz, capital of Lorraine, the 1908 Gare de Metz-Ville is also called the “Station Palace”. The designated historic monument contains the apartments of the German Kaiser Wilhelm II and a 130-foot clock tower.

The sleek modern train station in Liège was introduced in 2009. Made of steel, glass, and white concrete, the large airy station was designed by Santiago Calatrava as a gateway for high-speed trains across Europe.

Once the terminus of the famous Orient Express that started in Paris, Sirkeçi Station was inaugurated in 1890. Fusing French Art Nouveau and Ottoman architectural styles, it was built with stained glass windows and (then) state-of-the-art amenities like gas heating and lighting. It is also next to the spectacular Topkapi Palace.

King Victor Emmanuel III laid the cornerstone of the current Milano Centrale station in 1906, but the grandiose and complex structure was completed under Mussolini. A combination of Art Deco and Liberty styles, it contains 11,000 cubic meters of marble.

Located in the Hua Hin District of Thailand, this is one of the oldest stations in the country. Its main feature is an ornate Royal Waiting Room. It was rebuilt in 1926, by Prince Purachatra Jayakara.

California’s primary station, LA’s Union Station opened to the public in 1939. Its Beaux-Arts architecture (a combination of Art-Deco and Spanish colonial styles) was designed by Daniel H. Burnham and served as a model for Union Station in Washington, D.C, and Milan’s Central train station.

Originally built to serve the prison of Ushuaia, the Southern Fuegian Railway is now a heritage railway in the Tierra del Fuego National Park. Its “End of the World Station” is known for its spectacular views.

The gleaming white Kuala Lumpur Railway Station is an eclectic mix of Eastern and Western architectural styles. Mughal, Moorish Revival, and Indo-Saracenic styles are blended together with British colonial elements. It was completed in 1910.

The busiest station in the city, Flinders Street Station is a true Melbourne landmark. Completed in 1909, the grand Edwardian baroque building is known for its many clocks. It is one of the most beautiful train stations in the world.

Russia is full of beautiful train stations. This ornate station in Moscow was designed by Alexey Shchusev, architect to both the Tsars and Stalin. It was built between 1913 and 1940 and is a combination of various styles—Art Nouveau, Rococo, and details drawn from the Kremlin.

The highest station in Europe, the small Jungfraujoch station is more than 11,000 feet above sea level. Journey through the spectacular Swiss Alps from Interlaken via Lauterbrunnen and Grindelwald.