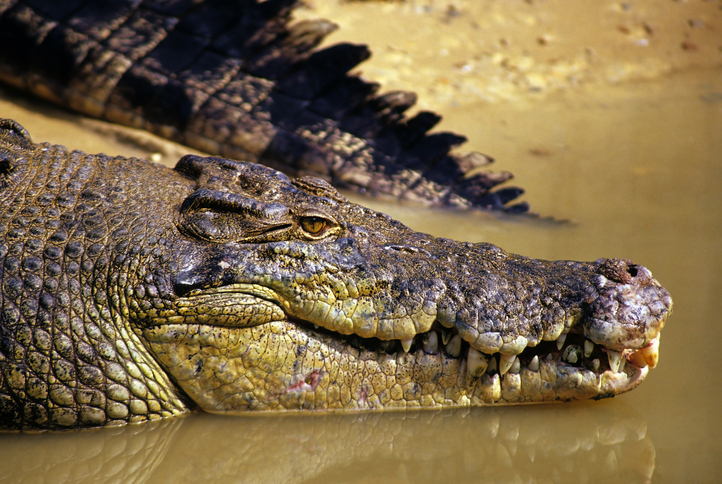 Here Are The Most Dangerous Animals Of The World:

1. Most Toxic Species Of Amphibian In The World: Golden Poison Dart Frog

This tiny and brightly colored frog is one of the largest of poison dart frogs and can grow up to 5 centimeters. Inhabiting the small range of rain forests along Colombia’s Pacific coast, the golden dart frog is one of the most deadly species known to humans. It was discovered in 1973 and scientifically described in 1978. A single frog carries 1,900 micrograms of poison (batrachotoxin) which is so potent that it can kill ten grown men. But what makes the amphibian especially dangerous is that its poison in its glands is beneath its skin, so any reckless animal merely touching it would be in trouble immediately. For centuries, the indigenous Chocó Indians used to lace the tips of their darts with the frog’s toxin.

2. Most Dangerous Animal In The World: Mosquito

These pesky bugs not only leave an itchy bite, but they are also responsible for the most animal-related deaths. The common mosquito is just three millimeters at its smallest. Yet, the reason behind many deaths each year is due to the various pathogens carried by various species of mosquito. The irritating insects are carriers of many fatal mosquito-borne illnesses and diseases, including malaria, Zika, dengue fever, Japanese encephalitis, West Nile, and yellow fever. Mosquitoes are attracted to body temperatures and carbon dioxide, therefore it is suggested to prevent bites, you use insect repellents with high inactive ingredients like DEET and picaridin. Also while traveling, it’s best to avoid Zika-free countries and coastal cities.

A tsetse fly, also called tik-tik fly is a blood sucking insect that resembles house flies and is commonly found in Sub-Saharan Africa. Measuring between 8 to 17 mm, tsetse flies feed on the blood of vertebrate animals, including humans during peak warm hours. A bite from a tsetse fly saws into the skin and spreads a protozoan parasite called trypanosomes which causes  a disease called African trypanosomiasis (or sleeping sickness). Symptoms include fever, headaches, joint pain, and itchiness, followed by vomiting, swelling of the brain, and trouble sleeping—giving the illness its name. The disease later causes death after several years of infection if left untreated. In Africa, it is estimated that about 50,000 to 500,000 people die annually from this disease.

The world’s most toxic creature is said to be a box jellyfish, named for its body shape. They are often found (moving at speeds close to five miles per hour) in coastal waters off Northern Australia and throughout the Indo-Pacific. Box jellyfish are highly advanced amongst jellyfish, and have developed the ability to move rather than just drift, jetting at up to four knots through the water. Their tentacles can grow up to 15 tentacles from each corner of the bell and can reach 10 feet in length. Each of the tentacles have about 5,000 stinging cells (nematocysts), that are triggered not by touch, but by the presence of a chemical on the outer layer of its prey. The stinging cells of these transparent, nearly invisible invertebrates contain toxins that simultaneously attack the heart, nervous system, and skin cells. The venom is overpoweringly painful, making them one of the most dangerous animals of the world. Their human victims can sometimes experience considerable pain for weeks, afterwards surviving it, but bearing nasty scars from its tentacles.

A subspecies of the African buffalo, the African Cape buffalo is a large, dark brown to black hoofed mammal with drooping fringed ears and large curved horns. They are considered a part of the African Big Five, grouping them among the most dangerous animals to hunt in Africa. They are also called Black Death because of their dangerous personality—they’re known to be grumpy and unpredictable. These massive animals are the only members of the buffalo and cattle tribe (bovini) that exist naturally in Africa. These behemoths can grow up to nearly six feet tall and weigh close to a ton, circle and stalk their prey before charging at speeds of 35 miles per hour. The African Cape buffalo often form large herds and are reportedly responsible for killing more hunters on the continent than any other creature. These powerful creatures are among the most dangerous animals of the world and inhabit Sub-Saharan Africa, including national parks such as Serengeti and Kilimanjaro in Tanzania, the Masai Mara game reserve in Kenya, and Kruger national park in South Africa.

This fearsome animal is the largest reptile on the planet and a formidable predator. Saltwater crocodiles, or ‘salties’, or estuarine crocodiles, reach a length of more than 23 feet (6.5 mts) and weigh over 2,200 pounds (1,000 kgs). These animals are widespread and can be found inhabiting the brackish and freshwater regions of eastern India, Southeast Asia, and northern Australia. These animals are known for their infamous technique, the “death roll”, where it continuously flips its prey over in the water until it drowns, making it one of the most dangerous animals of the world. These incredible creatures are short-tempered, easily provoked, and aggressive—partly a result of its strong territoriality. They are excellent swimmers and feed on anything they can get their jaws on, including water buffalo, monkeys, wild boar, and even sharks.

This predatory bug, as its name suggests, uses its short three-segmented beak to pierce its prey and inject a toxin that paralyzes the victim in a fraction of a second and begins liquefying its innards. After sucking their victim dry, these bugs attach the entire corpe to its back like a protective shield. Assassin bugs range from 5 to 40 mm (0.2 to 1.6 inches) in size. All over the world there are 7,000 species of assassin bugs. The members of the sub-family triatominae, commonly known as triatomine bugs or kissing bugs, are some of the best known assassin bugs. They are also called kissing bugs because they typically bite humans painlessly around the mouth while sleeping. But if they also happen to defecate in the process, a dangerous protozoan parasite trypanosoma cruzi from their feces gets into the wound, leading to Chagas disease. The disease immediately causes infection and inflammation of human tissues.

This snake is one of the most feared creatures in the world due to its speed. Growing up to 14 feet long, the black mamba is the longest venomous snake in Africa and the second-longest in the world. It slithers at a speed of up to 12.5 miles per hour, making it the fastest snake in the world. These species inhabit the savannas and rocky hills of southern and eastern Africa. A bite from this front-fanged snake is almost 100 per cent fatal. The venom is a blend of neuro- and cardiotoxins which can kill within 20 minutes. This fearsome serpent is fast, nervous, and when threatened, highly aggressive.

Also Read: 10 Most Venomous Snakes In The World

Dare To Visit The World’s Dangerous Animals In Their Natural Habitats?

We hope we have given you some new names to mull over on the list of the most dangerous animals of the world. In spite of their size, the little guys in the list above should not be underestimated. It’s best to first research the region you’re about to visit, take necessary precautions such as taking guides or carrying antivenom while visiting these dangerous animals. These ferocious beasts, both large and small, are deadly, and therefore not to be encountered without caution. If we’ve missed any of the world’s most dangerous animals, let us know in the comments below.