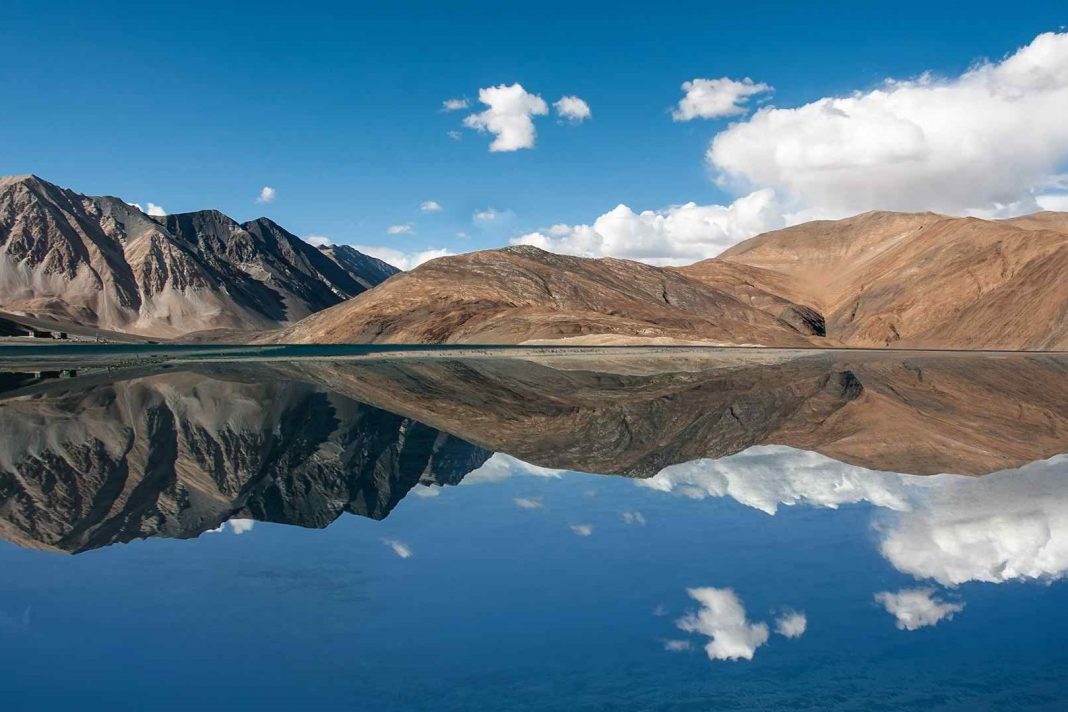 The inter-country wetland that shares its water both with India and China is Pangong Tso Lake. It is set in the lap of the giant Himalayas at a height of 4000 kilometres from the main sea level. The lake is 160 kilometres from Leh-Ladakh, a small township in the state of Jammu and Kashmir. Pangong Tso which means ‘high grassland lake’ in Tibetan is said to derive its name from the Tibetan word ‘Banggong Co’ meaning ‘an enchanted, long, narrow lake’.

The covered area of the lake is more than 550 kilometre square with 60% of its length in Tibet (China). It stretches for nearly 130 km, while the width is anywhere between 2-6 km. As the lake is shared by two countries, tourists are allowed only up till Spagmik Village. Beyond this is the Sino-India border where tourists are not allowed.

Why Pangong Tso is so intriguing

The lake is a wonder of its own for many reasons. Pangong Tso is not entirely a freshwater lake and some portion of it has saline water as well. Another food for thought is that though the lake is partly saline, it freezes solid in winters!

It is an impenetrable and a landlocked basin and hence draining of water to other channels does not take place. The water in the lake, congregated mainly due to the melting of glaciers, is the source for the lake’s freshwater percentage.

No aquatic lives are present on the Indian side of the lake except some small crustaceans which are often found near the water beds.

It is also known as ‘The Lake of changing colours’ because it appears to change colours ranging from blues and greens to even reddish hues. The colourful lake view with the indigo sky behind creates a utopia for nomads. The surreal beauty of the Himalayas takes one into another panoramic world of ecstasy and romance.

What can you find at Pangong Tso?

The lake is home to migratory birds from far lands. Birds like seagulls, rodents, bar-headed goose and ducks are few of the bird species that can be easily found along the lake. The main fauna around the lake is kiang, yaks, and marmot. Flora is only limited to small shrubberies that grow alongside the water body. And of course, the few crustaceans.

The lake is a slice of miracle during January when the mercury comes down much below zero. The iced lagoon during winter becomes a hard and stiff chunk. The colours of the stiff lake deliver optimal scenery for photographers and nomads. Farmers walk through the lake to the other side of it for pastures. People from the rural community play ice hockey on the lake but this act can be dangerous as the ice gets thin at many places and there remains a risk to life.

The place came to the limelight after shooting of the film ‘Three Idiots’ in 2009. The last scene of this film was shot at this lake. Beside ‘Three Idiots’, several shots of Bollywood films like ‘Dil Se’, ‘Tashan’, ‘Jab Tak Hai Jaan’, ‘Sanam Re’, ‘Shakti’, ‘Waqt: The Race against Time’ and many more were captured at Pangong Tso. Apart from Bollywood films, many South Indian movies were also shot at this location.

Pangong Tso Lake makes one feel that this is probably what serenity is made of. So when will you plan a visit? If you’ve already been there, let us know in the comment section below.

Why you should visit Ladakh, a Ladakh Travel Guide
Ever visited Ladakh during the amazing Naropa Festival?