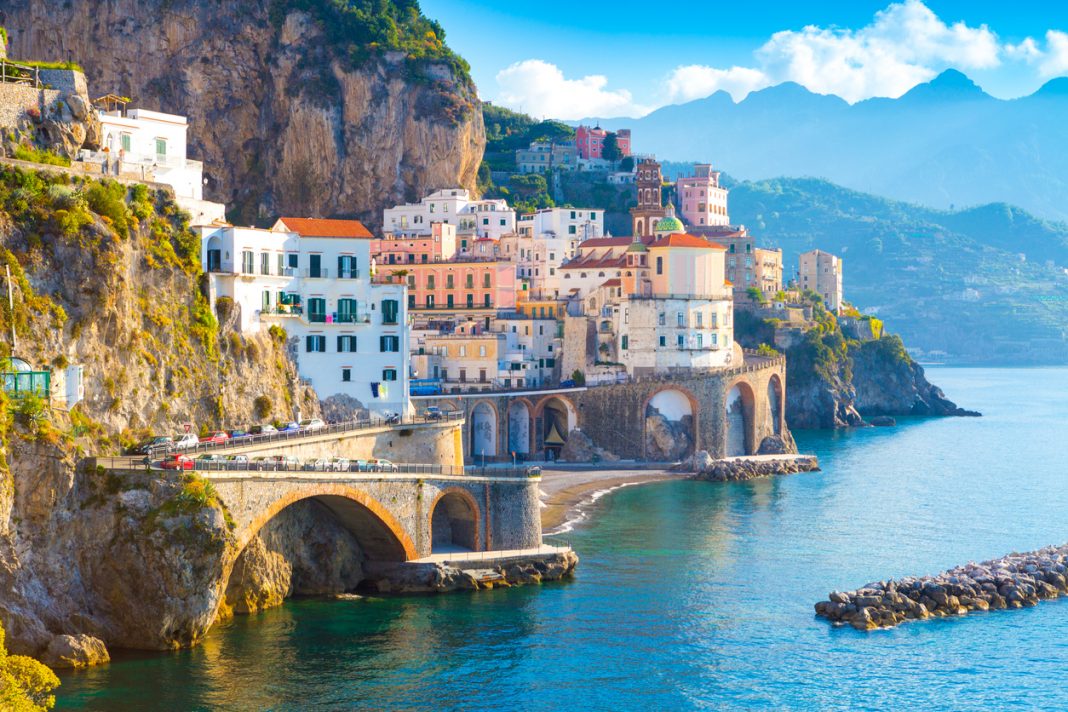 A short drive away from the popular Italian town of Amalfi, resides the smallest town in the whole of Southern Italy – Atrani. This fishing village enjoys the same wonderful Mediterranean climate as the rest of the Amalfi Coast, and also shares much of its history. There are lots of wonderful places to visit in Atrani.

With a population of just over 900 people, Atrani consists of an enchanting cascade of houses clinging to the rocks and surrounded by a maze of little alleyways and steep flights of steps, covered passageways, and tiny gardens. This little town is nestled in the divide of two steep cliffs on the shore of the Tyrrhenian Sea and can be considered as one of Italy’s best-kept secrets. With its tier upon tier of multi-coloured houses rising above a beautiful stretch of pristine sand, Atrani will prove how similar it is to wine. Aged with perfection.  Atrani is the place to experience Italy as it should be.

Today, the town can be reached via the seafront route from Amalfi. It takes around fifteen minutes. That way, you’ll get some sea air and great views of the coast along the way.

Places to Visit in Atrani: 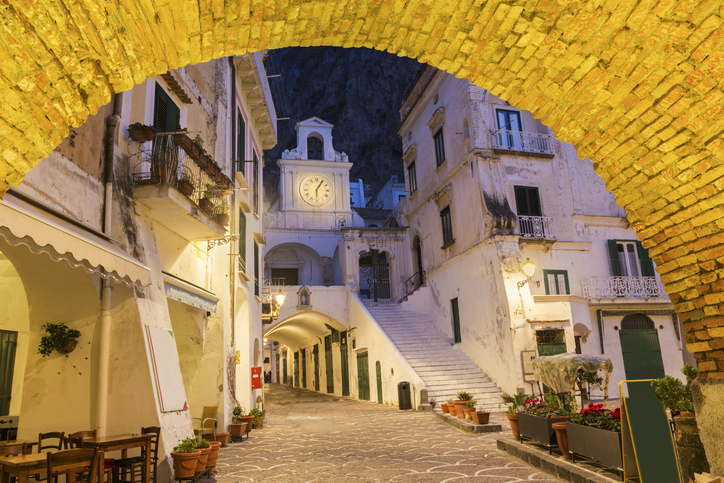 Situated at the heart of Atrani is the charming Piazza Umberto I which was originally constructed as a shelter for boats during high tide and now,  appears like a theatre backstage, facing the sea. The Piazza is located just steps from the sea, and is entirely enclosed by four-story houses. Along with that, you’ll notice the piazza is full of the essentials of Italian life: a general store, a coffee shop, a bar, restaurants, and barbers.

An arcade to one side offers you a glimpse of the beach, fishing boats, and the sea beyond. The fountain in the piazza is a recent addition but was constructed in 1927.  Locals and visitors alike gather at the tables on the terraces of the bars or cafes and enjoy the vibrant antiquity of Piazza Umberto I. 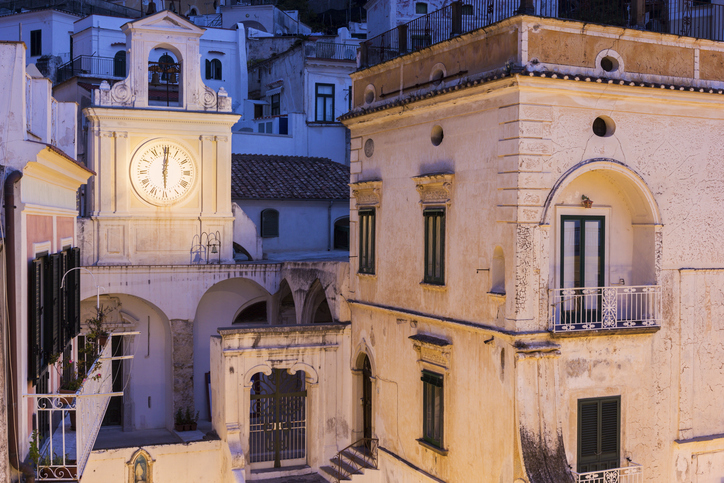 This 10th century Church of San Salvatore de’ Bireto is located in the main square of Atrani (Piazza Umberto I). The given name Bireto most likely comes from the Semitic word biru. It means “a small stream of water;” referring to the fact that it is built on an arch right over a stream; today a narrow road leading through Atrani. The church was remodelled in the 1800s. But it has also gone through some careful restoration to reveal aspects of its medieval past. These modifications include Arab-influenced Gothic designs, ancient ceramic tile work, and religious artefacts (like a curious 12th-century marble plaque showing two peacocks).

Also, see the panelled bronze doors (cast in the 11th century) that came from Constantinople; and the doors in the Amalfi Duomo. They are both testament to the cultural and commercial exchange between the Republic of Amalfi and the Orient.

You can stand in the small piazza in front of the church to look up to admire the 16th-century bell tower; and also the striking thirteenth-century Rococo facade of the church. Inside, the nave is decorated arches and religious artwork in true Baroque style. If you are visiting in July, you must not miss the Festival of Santa Maria Maddalena. It is held in Atrani on 22 July.

During this mid-summer celebration, the entire population of Atrani hits the narrow streets to honour St Mary Magdalene. Legend has it, she saved the town from a pirate attack. This religious procession is carried down to the beach with an image if the saint accompanied by a local band. After the tower bell rings, a blaze of fireworks lights up the sky to mark the beginning of a night of festivities. Don’t be shy and join the night of feasting and fun! 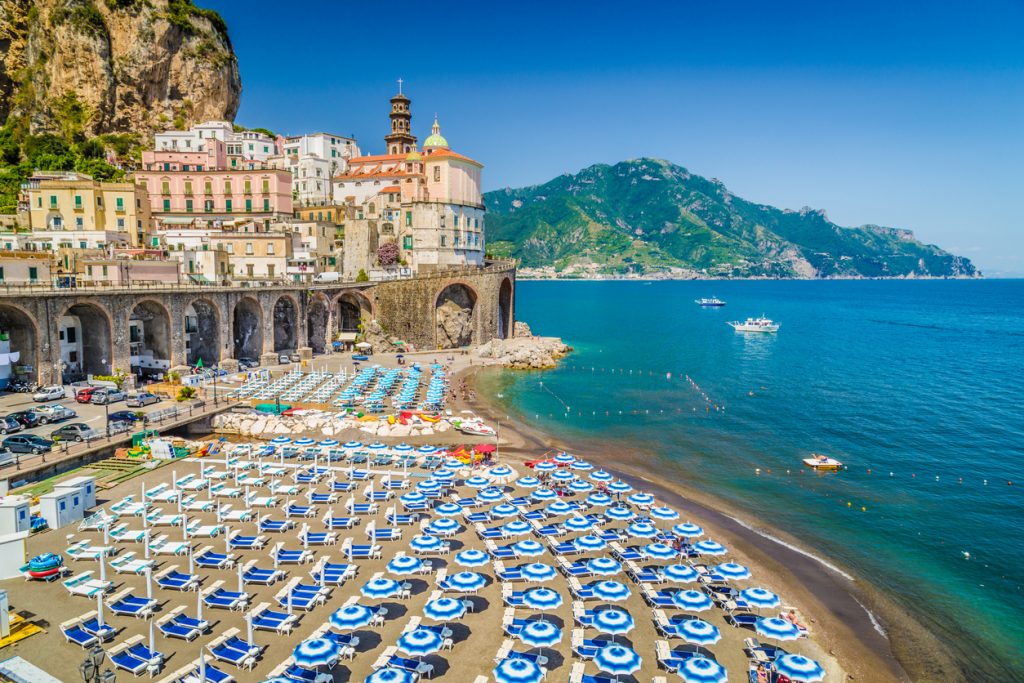 Finding a more ideal place to spread your towel and just relax than on the Atrani Beach would be impossible. Known for its soft black sand, this is quite the luxury to the feet compared to the pebbly beaches of the Amalfi Coast! You’ll find the beach curving around the small bay which is sheltered by the town and cliffs behind it.

Wherever you are on the beach, no matter which way you look, you’ll be bowled over by Atrani’s gorgeous coastal scenery. The beach is accentuated by the pure Mediterranean blue of sea and sky. It lets you take a break from the loud neighbours at the Amalfi Coast. Adding to that, the clear waters of the Tyrrhenian Sea are perfect for swimming and even better for snorkelling.

With its idyllic and picturesque settings, Atrani is a place just waiting to be explored. Climb the steps up from the beach level and wander through the narrow, winding streets. There you’ll discover thirteenth-century baroque churches and piazzas with spurting fountains. Listen to the tolling of the bell from the sixteenth-century tower as it chimes and breaks the quiet of the siesta hour. Ponder life over a drink on a cafe terrace in Piazza Umberto, the main square; and fall in love with Atrani’s picturesque and idyllic beauty.

Also Read: Picturesque Things To Do On The Amalfi Coast In Italy

Are there any places to visit in Atrani we’ve missed? If so, be sure to share them in the comments below.