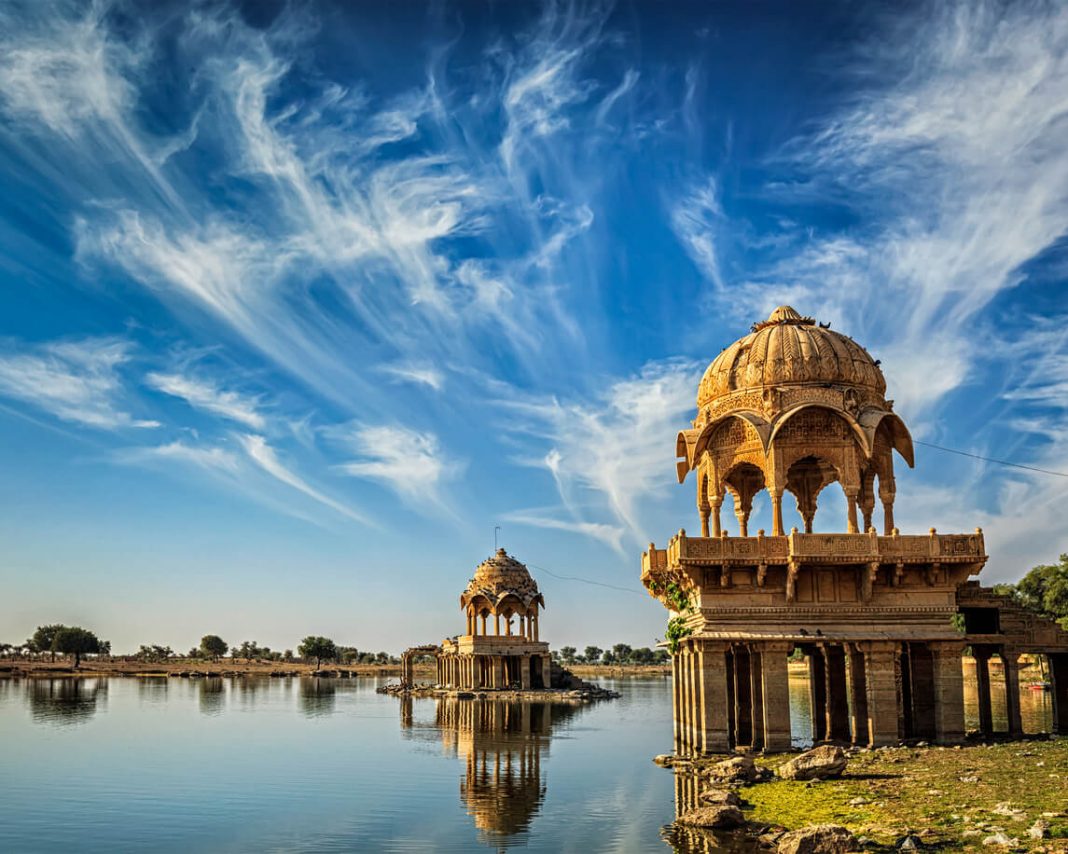 Gateway to the Thar Desert and beyond the dazzling royal cities of Rajasthan lies the exquisite city of Jaisalmer. Dubbed as “The Golden City”, Jaisalmer is home to many artistic structures and monuments of historical importance. The city has a plethora of places to visit, making it a haven for tourists. Steeped into this city are stories about courageous rulers and tales of unequalled valour and unique beauty which provides its visitors with a memorable experience. With its inception in the mid-12th century, Jaisalmer has emerged as a slice of Royal heritage making it a must-visit place in India. So check out the places to visit in Jaisalmer here.

Constructed by Raja Jaisal, Rajput ruler in the year 1156 AD the Jaisalmer Fort is ranked amongst the largest forts in the world. The golden and yellow sandstone of this architectural wonder turns into honey- gold at sunset justifying the name “Sonar Quila”. The architectural design of the fort having intricately carved windows, doors, and walls making it one of the fine examples of the rich heritage in India. With its 99 turrets, the Jaisalmer fort stands tall displaying the magnificence of Rajasthani architecture making it one of the best places to visit in Jaisalmer.

Located 6 kilometres away from Jaisalmer city, Bada Bagh is a beautiful place that houses several cenotaphs of the royal families from the 16th to the 20th century. Though Jaisalmer is known as the city of deserts, its rulers attempted to add some greenery to its landscape and Bada Bagh was one such endeavour. Built-in ancient Hindu architecture, this garden complex is surrounded by cenotaphs dedicated to each of the Bhatti rulers. The garden also provides stunning views during sunrise and the sunsets as well, making Bada Bagh a perfect backdrop for clicking perfect pictures.

Marked by intricate carving and murals adorning the streets of Jaisalmer is the architectural marvel of Patwon-ki-Haveli.  Built-in the 19th century, this Haveli is a combination of 5 different Havelis in one single premise and is one of the largest Havelis in Rajasthan The haveli is home to fine wall paintings, beautiful jharokhas (balconies), archways, and gateways. Due to its grandeur, the monument adds immense value to the cultural heritage of the city.

Sam sand dunes are indeed one of the most authentic desert dune sites in India and truly deserve to be on your list of the places to visit in Jaisalmer. Approximately 42 kilometres from the fort city, the desert exudes an ambience with stretches of sweeping dunes and crimson horizons making you experience a blissful landscape. The best way to experience the dunes is through the safari on camelback, which would take you along crests and troughs which could end perfectly by watching the picturesque sunset.

Constructed in 1400 AD by Maharwal Gadsi Singh, the then Maharaja of Jaisalmer the lake was originally built as a conservation reservoir for rainwater harvesting and happened to be one of the major sources of water for the city. Today this reservoir has earned a spot on the list of the most popular places to visit in Jaisalmer. Located in the outskirts of Jaisalmer the reservoir is ideal for tourists seeking peace and tranquillity. During winters, it is flocked by different species of exotic and migratory birds and serves as a haven for birdwatchers and nature photographers.

Constructed during the early part of the eighteenth century this haveli is one of the popular tourist attractions in Jaisalmer. The haveli’s roof is based on the peacock’s physical form, making it a unique spectacle of Rajputana architecture. It also has an extraordinary silhouette made up of 38 balconies, each having distinct designs. Visiting this haveli will allow you to glimpse at the yesteryears of Jaisalmer not to mention the architecture here makes some stunning photographs.

A blend of Islamic and Rajputana architecture, Nathmal Ki Haveli is one of the most beautiful Havelis in Jaisalmer. This haveli has derived its origin from the late 19th century and has an extraordinary exterior that is filled with carvings. The left and right wings were the work of two brothers-Hathi and Lulu and their competitive spirit produced this magnificent piece of architecture. Apart from its extraordinary outer carvings, this haveli is known for its beautiful interiors filled with paintings and equipped with modern facilities.

Located 18 km away from Jaisalmer, lying abandoned from the past few centuries and having no signs of human life is the ghost village of Kuldhara. Also known as one of the haunted places in Rajasthan Kuldhara is a clan of eighty-five villages and was once inhabited by the Paliwal Brahmins, but due to some adverse happenings, the natives evacuated the village. The reasons for why a whole city was abandoned within a night is not clear but the popular belief holds the then state minister Salim Singh was responsible for the same. The minister wanted to marry the village chief’s daughter and hence gave an ultimatum to the village chief to accept his demands or let the whole community face dire consequences. Rather than giving in to the minister’s demands, the whole village decided to move away. Before leaving, they cursed this place to never have any kind of human settlement and this has been proven true to this date.

Established in AD 847, the highly revered Tanot Mata Temple is believed to be Goddess Hinglaj Mata’s incarnation. Located in the proximity of Longewala that used to be a battle site during the 165-71 Indo-Pak war this temple is considered miraculous. The Jawans stationed near the temple often have magical stories to share. The temple is currently maintained by the Border Security Force of India and it preserves a collection of unexploded bombs dropped by Pakistan during the 1971 war. People visit this magnificent location because of the beautiful landscapes surrounding it. A glimpse of the Tanot Mata Temple was shown in the popular Bollywood movie Border.

Located inside Jaisalmer Fort, Jain temples are a series of temples dedicated to Jain Tirthankaras, Rikhab Devji, and Shambhavi Dev Ji, the famous Jain hermits and can be traced back to the 12th century. The temples are a great example of a Dilwara style built with animals and human figures carved on the walls of yellow stones. Beautifully carved and well interconnected, these temples will leave you enthralled with their magnificence.

Also read: Experience Jaisalmer Like Never Before: Immerse Yourself in the Culture Of The Desert

Let the Golden City dazzle you

As a city, Jaisalmer is home to various popular destinations which will make your trip here exciting, adventurous, and filled with cultural heritage. A trip here will involve not only exploring the various historical monuments spread all over the city but also the tourist attractions located around it. In addition to this, the love and warmth of the people here will make you keep coming to Jaisalmer again and again. Visit here to take a journey through the history of the Rajputs and get mesmerized by Rajasthani Folk music while doing so.