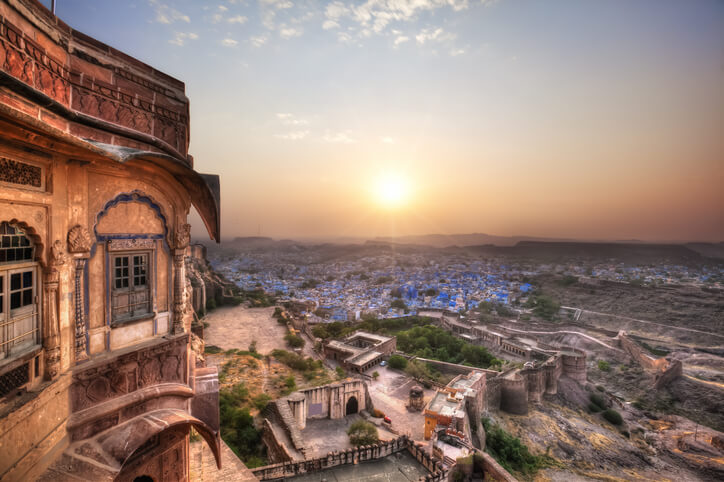 Jodhpur, also known as the Blue City, Sun City and Gateway to Thar, is located on the edge of the Thar desert in Rajasthan. It is the second-largest city in the state and is known for its historical sites of interest, colourful shopping, desert safaris and unique food experiences. The  massive Mehrangarh Fort dominates the city, marking it as the former capital of Marwar. Jodhpur offers a plethora of attractions and places to visit, and we’ve listed seven of the most famous among them. Winters are usually the best time to visit Jodhpur as the temperature ranges between 7 and 24°C making the weather in Jodhpur pleasant and balmy. Make the trip to the Blue City between October and March and explore the best places to visit in Jodhpur.

The Top Places To Visit In Jodhpur:

1. One Of The Most Visited Lakes In Rajasthan: Kaylana Lake

Spread over an area of 84 square kms, Kaylana lake is a massive man-made lake on Jaisalmer road in Jodhpur. Surrounded by babul trees, hills, and rock formations, this pristine lake is an ideal picnic spot, and one of the best places to visit in Jodhpur. It offers many picturesque sights across its boundaries while boating or simply strolling through its verdant lawns. It is also a perfect spot for birdwatching offering views of a variety of birds beating the heat of Rajasthan while enjoying the cool breeze off the lake. Located 8 kms to the west of Jodhpur, Kaylana lake was constructed in 1872 by Pratap Singh. Originally, the lake was to serve as a primary source of drinking water for the city and other neighbouring settlements.

2. One Of The Most Magnificent  And Formidable Forts Of Rajasthan: Mehrangarh Fort

The imposing Mehrangarh Fort dates back to the 15th-century and is perched 400 feet above the city of Jodhpur. This behemoth is a well-preserved heritage structure and is now transformed into a museum. Mehrangarh is one of the largest and most famous forts in India. It  was privately restored, and today boasts exquisitely latticed windows, carved panels, intricately decorated windows and holds many beautiful palaces in Jodhpur, such as the Sheesh Mahal (Palace of Mirrors), Moti Mahal, and Phool Mahal. The museum at this Jodhpur fort showcases  an outstanding display of royal memorabilia, including about 15,000 items from Maharaja Gaj Singh II’s personal collection. Head to the top of the fort for a splendid bird’s eye view of the city spread out below. Drop by the only professional museum shop in India at the fort to buy some fun souvenirs and gifts. Mehrangarh Fort hosts daily cultural performances at various places inside as well. The spectacular fort is one of the best places to visit in Jodhpur.

Spread over 72 hectares, the Rao Jodha Desert Rock Park is at the base of the Mehrangarh Fort and is one of the best places to visit in Jodhpur. It was developed in 2006 to restore the natural ecology of a large rocky wasteland area in the region, but it was only in 2011 that the public could visit and explore the park. The rehabilitated land has a rugged, hilly terrain and boasts many walking trails, perfect for a long hike. One of the best places for nature lovers, the park is densely populated with Thar desert’s indigenous flora. There are over 200 species of plants at this eco-park. It’s interesting to explore the real terrain and vegetation of Rajasthan at different times through the year, as its foliage changes with the seasons. The eco-park is also one of the best places for bird and butterfly watching, both of which are among some of the awesome things to do in Jodhpur.

Ghanta Ghar is a magnificent clock tower located at the heart of Jodhpur. Built by Maharaja Sardar Singh about 200 years ago, the tower signifies the start of Old Jodhpur. It stands at the centre of one of the busiest areas of Jodhpur—Sadar Bazaar—and is known as the old city’s most famous landmark. The tower is surrounded by street markets and offers a brilliant panoramic view of the city from the top. Due to its close proximity to the old markets, it is one of the best places to visit in Jodhpur.

Built in 1899 as a memorial to Maharaja Jaswant Singh II, who ruled Jodhpur, Jaswant Thada is an intricately crafted structure that offers stunning views of the Mehrangarh Fort. This cenotaph features white marble lattice screens and opulent domes on the outside, while the inside is adorned with portraits of Rathore rulers along with informative didactics. Jaswant Thada is managed by and looked after by the Mehrangarh Museum Trust (MMT). It is open to the public and offers a peaceful environment away from the hustle and bustle of the city. Boasting beautiful jaali work, Jaswant Thada is considered as an architectural landmark and is a must-visit place in Jodhpur. The beautiful edifice is a peaceful place to relax and enjoy stunning views of the Fort and resembles a temple.

Synonymous with Jodhpur tourism, the grand Umaid Bhavan Palace was built between 1928 and 1943, for HH Maharaja Umaid Singh as his private residence. It was one of the last grand palaces built in India, and is quite a favourite amongst visiting tourists. While half the palace has been converted into a luxurious hotel, the other half is the royal residence with a museum. The museum boasts royal portraits, vintage cars, vintage watches and other historical artefacts from the many royal families of Jodhpur. Perched atop Chittar Hill, this palace is also known as Chittar Palace, and is one of the best places to visit in Jodhpur. The magnificent Umaid Palace is recognised as one of the largest private homes in the world.

Also Read: Spend the Night Like a Royal at These Castle Hotels Around the Globe

Before Jodhpur was founded, Mandore served as the capital of the Marwar region. Lying just a few kilometres outside Jodhpur, today it is known for its eclectic collection of temples, gardens, a small museum, and an old fort. The Mandore Gardens are a must-visit in Mandore. You’ll find wide green expanses, exquisite architecture, and royal cenotaphs of previous rulers of Jodhpur— all of which was once a local picnic spot. Located just 9 kilometres away from Jodhpur, Mandore Garden gives you an idea of the magnificent architecture and history of a bygone era. Of all the gorgeous cenotaphs or dewals that are found spread across Mandore Gardens, the most famous is of Chhatri of Maharaja Dhiraj Ajit Singh. Constructed in deep red sandstone, this structure is a beautiful amalgamation of Buddhist and Jain architecture. The garden is a part of the massive Mehrangarh Fort, and also houses many temples and ruins on  its premises.

Come Visit The Jodhpur Tourism Places With Us

Immerse yourself in the history, culture and colour of Jodhpur with these famous attractions. While Jodhpur’s usual suspects are Umaid Bhawan Palace and Mehrangarh Fort, there is so much more waiting for you to explore. Visit this enchanting city to experience the magic of an ancient city existing within the new. Let us know if you have more places to visit in Jodhpur.