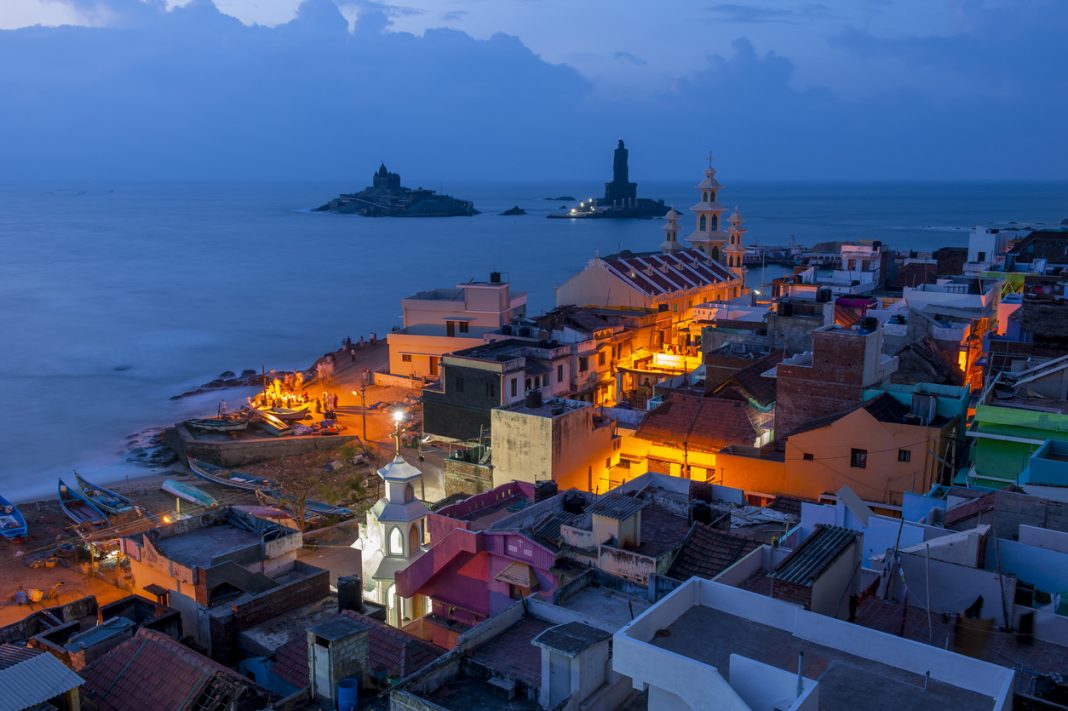 Kanyakumari is a wonderful city in the Indian state of Tamil Nadu. It is also the southernmost point of the Indian sub-continent, and the only place in India where one can see the sunrise, sunset and moon rise from the same place.

Also Read: 10 Beach Destinations in India That You Should Visit, Other Than Goa

This small coastal town was once known as Cape Comorin (during British rule), and its beautiful coastlines attract tourists throughout the year. Featuring a unique mix of ancient heritage and natural beauty, here are some reasons you have to visit Kanyakumari this year:

1See the meeting of three oceans

Kanyakumari is located at the meeting point of three different bodies of water – the Indian Ocean, the Bay of Bengal and the Arabian Sea. This spot is known as Triveni Sangam, and is considered so sacred that a dip in the water will wash away all your sins. You can also witness the breathtaking sunrises and sunsets from the Viewing Tower or the Lighthouse.

2Visit the many temples

Kanyakumari is renowned for its many temples. It is said to be the abode of the Hindu goddess Kanya Kumari, an incarnation of the better-known goddess Parvati (consort of Shiva). So, there are many temples here. See the 3000-year-old Kumari Amman Temple (also known as Arulmigu Bhagavathy Amman Temple) dedicated to the goddess Kanya Kumari; or the unique Thanumalayan Temple, the only temple in the world where the Hindu trinity of Brahma, Vishnu and Shiva are worshipped as a single deity – Sthanumalayan.

This town is full of shops selling all kinds of wonderful handicrafts. Objects made from shells dominate the souvenir stalls, though you can also find things like wooden toys, metalwork, and lovely woven handloom saris. One of the best places to go is Sannathi Street near the Kumari Amman Temple.

4The multicoloured sands on the beach

This memorial is dedicated to Mahatma Gandhi, whose ashes were kept here before being scattered into the sea on February 12, 1948. The memorial is built to resemble temples in Odisha. It is designed so that at noon on October 2 (Mahatma Gandhi’s birthday), the sun’s rays fall through a hole in the and onto the exact place where the ashes once sat in an urn.

This rock is located just off the coast of Kanyakumari. It was where Indian poet and philosopher Swami Vivekananda went to meditate in 1892 for three days; before deciding to take his moral message across the world. In 1970 a memorial temple was built here, reflecting architectural styles from across India; along with a meditation centre and a statue of Vivekananda himself. You can get here via a 15-minute ferry ride from Kanyakumari beach.

From the Vivekananda Memorial, you can see the towering 133-foot-tall statue of the famous ancient Tamil poet and philosopher, Thiruvalluvar. Completed in 2000, it honours the poet’s 133-chapter work Thirukural. There are regular ferries from the  Vivekananda Rock Memorial. It is also possible to go inside the base of the statue and climb up its feet for stunning views of the sea.

8Take a day-trip to Padmanabhapuram Palace

Just an hour northwest of Kanyakumari is the town of Padmanabhapuram. It was once the capital of the princely state of Travancore (before it relocated to Trivandrum; now in the neighbouring state of Kerala). Here you can see the majestic Padmanabhapuram Palace. This massive wooden palace complex is filled with intricately carved rosewood ceilings, gables roofs, and numerous courtyards. It is said to be one of the finest examples of traditional Keralan architecture.

Also Read: 15 Magnificent Royal Palaces in India You Must See

The best time to visit Kanyakumari is from October to November when he temperature is cool. But, the seas can be rough at this time of year. So, if you wish to spend your time by the water, then the ideal time would be June to September.