Aegean Airlines took us from Athens to Rome…not such a great experience. It’s a budget airline, but they charge you Euro 35 for each bag you carry, immaterial of the weight! This is of course in small tiny minuscule print on the website, so people over 40 with eyesight issues will definitely miss it! Like we did…I had to swipe my card and was quite irritated about that.

Leonardo da Vinci airport itself, as the name suggests, is the start of a complete walk into the past. Said to be founded by Romulus and Remus (who were brothers abandoned on the banks and looked after by a she wolf), Rome is full of old buildings and Cathedrals. Every 10 steps you are in front of yet another Church or Cathedral or an old important heritage building. If you are a History buff, this is the place to visit.

We stayed in a hotel close to Rome Termini (the main station). Ensconced in a room that was a little bigger than a broom closet we drank in the essence that is Rome. A cage like lift ferried us up and down but at times we had to wing it using our own two feet as the lift was out of order quite a few times! 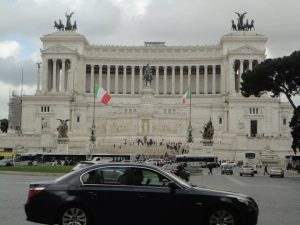 We did a Rome by Night bus trip. Really good and I would recommend you do it if you visit. If you go by yourself and not as a group tour, it’s good to do this so that you can figure out in your mind where you’d like to spend time and what you’d like to see. The facades of the buildings are fantastic and there are several old buildings which are heritage sites now. The River Tiber winds its way through the city and there are numerous bridges built across it. Because the river is identified with Rome, the terms “swimming the Tiber” or “crossing the Tiber” have come to be the shorthand term for Protestants converting to Catholicism.

The Colosseum is a large imposing building which was at the time being renovated and restored. The largest amphitheatre in the world, it is built of stone and concrete. It was mostly used for gladiator fights. So it has probably seen a lot of blood and gore in days gone by. I thought that I could see the reddish stains on some stones around but then I do have a hyperactive imagination! It is huge and had a lot of scaffolding (which is a bit of an irritant) due to the restoration work going on. 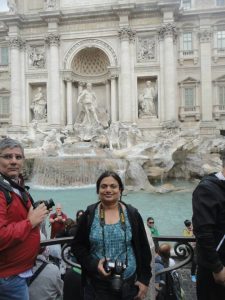 The Fontane de Trevi is at the junction of three roads. It marks the terminal of the Aqua Virgo, which was one of the aqueducts that supplied water to ancient Rome. The backdrop for the fountain is the Palazzo Poli. The fountain mixes water and rock-work to form a theme that translates to ‘taming water’ and fills the small square. Tritons guide the ‘Oceanus’ shell chariot. In the centre is a triumph arch superimposed on the façade of the palazzo. The centre niche has free-standing columns. In the niches which flank Oceanus, the statue of Abundance spills water from her urn and the statue of Salubrity holds a cup from which a snake drinks. All very ornate and beautiful to behold. The tritons and horses provide support..a superb piece in front of which is a busy square with folks sipping on lattes, munching on sandwiches and smoking, clicking pictures and buying overpriced souvenirs from carts. You can walk on the various small alleys that surround it – there are cafes and shops all around.

For upmarket shopping go to the Piazza de Spagna – Gucci, Pucci, Jimmy Choo, Chanel and the like. Via Cola di Rienzo for reasonably priced shopping. Porta Portese is a street market. Actually it is best to just walk around and buy from street hawkers – they sell a variety of souvenirs, clothes, shoes, wonderfully colourful handbags (I bought one and simply love it) and other knick-knacks. Strangely I’m not a great shopper but I do love buying stuff that catches my eye. So my home is full of little things from various parts of the world.

For the Roman Catholics, this is a veritable treasure house of sorts…Basilicas every ten metres! To name a few – Basilica of Santa Maria de Maggiore, Basilica of St Paul Outside the Walls, Santa Maria Sopra Minerva, Santa Cecelia and so on. I went to almost every Church I passed – we believe that if you visit a Church for the first time and pray for something, it is invariably granted. I believe and I have faith!

We stopped at numerous cafes to have pizza slices, cappuccinos and espressos. Very nice to just sit on a sidewalk, on a wrought iron chair with a shaky table and be served by a very handsome Italian waiter. Makes you feel very touristy doing the stuff you have seen in the movies. Very Roman holiday-like! 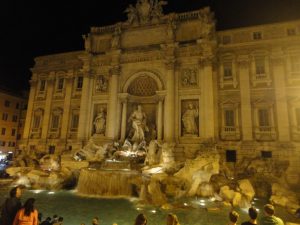 We went to a quaint restaurant near the Termini which specialised in Roman cuisine. At 9.30 pm they were out of most of the items on the menu. The guy who took our order was also the Chef. They pre-cook and have very limited quantities – so when it’s over, it’s over, if you know what I mean! We dined on artichokes which were sort of stir fried, big meatballs in a tomato gravy, vegetable soup and warm bread. Also guzzled a big carafe of Bianco which was good.

When in Rome, do as the Romans do…so we did just that..we walked (rather ambled) around, sat on benches and watched the world go by, shopped in the streets, bargained with street vendors, ate well and drank even better!

You need at least a week in Rome to do justice to the eternal city. I do want to go back and soon.

*All photos apart from the featured image belong to author Mavis Smith.