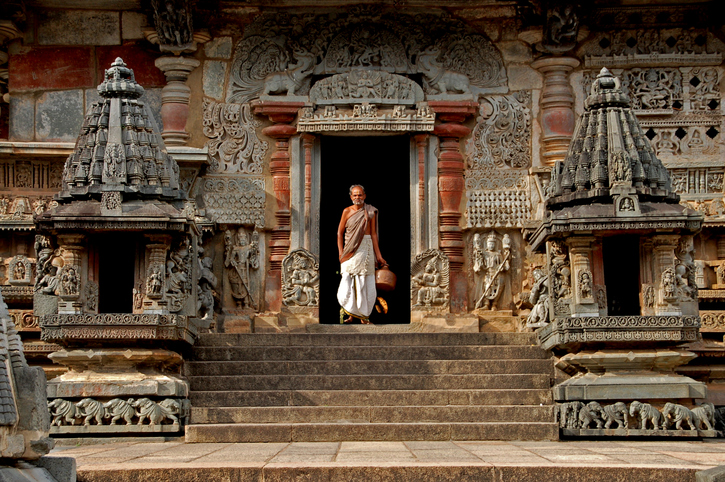 Situated on the banks of the Yagachi river in Hassan, the city of Belur in Hassan district of Karnataka is called a modern heaven on earth due to its cultural and historical significance. Previously called Velapura, the Hoysala dynasty chose Belur as an alternate capital after the subsequent destruction of Halibeedu by the sultans of north India. During their reign, several temples in Belur were built under their patronage.

Belur takes you back in time to get a glimpse into the art, design, and sculpture of a bygone era. The innovative architecture and beautiful carvings of the temples draw several thousand tourists every year. For history and architecture lovers, these six temples in Belur are a must-visit.

Also Read: The best places to visit in Hassan

The Top Temples In Belur That You Must Visit

A fine example of Hoysala architecture, the Chennakesava Temple in Belur was built in the 12th century by the Hoysala king Vishnuvardhana. Adorned with intricate carvings depicting scenes from the ‘Mahabharata’ and ‘Ramayana’, the temple took 103 years to finish. Also referred to as Keshava, it has been an active Hindu temple since its founding. Dedicated to Shiva, this little wonder of Belur is one of the lesser-known sites in Karnataka. This temple of Belur is a testimony to the cultural, artistic, and theological perspectives of the Hoysala empire.

One of the most famous places in Belur, the Paathaaleshwara Temple is one of the ancient sculptures constructed by the Ganga kings. Known for the colour-changing lingam present at the temple, the place attracts thousands of tourists. Constructed by carving on stones, this temple in Belur has fantastic architecture. Standing in near ruins, this little wonder of Karnataka is an understated one.

Other Famous Religious Structures And Temples In Belur

Built by Queen Shantala Devi in 1117 CE, the Kappe Chennigaraya temple is a minor shrine located at the south of the main sanctum of the Chennakesava temple. Measuring 124 feet by 105 feet, it has two sanctums inside—one dedicated to Chennigaraya and the other to Venugopala. The idol of the deity draws several devotees every year. This temple of Belur is named after a local legend, wherein a kappe (frog) was once found near its navel.

Located to the west of the Kesava temple, the Veeranarayana temple is a small but complete temple with a garbhagriha (sanctum) and a navrang (nine square hall) with 59 large reliefs on the outer walls. Measuring 70 feet by 56 feet, this temple of Belur is dedicated to Vishnu, Shiva, Bhairava (angry Shiva), Brahma, Parvati, Saraswati, Lakshmi, and others. Dating back to the 12th century, some panels depict the Bhima story from the ‘Mahabharata’.

Located at the southwest of the Chennakesava, Somyanayaki temple is a small temple dedicated to Somyanayaki (a form of the goddess Lakshmi). Dating back to the 12th century, this temple of Belur is notable because its tower is a miniature version of the major tower that once rose above the main Kesava temple.

Also called the Ranganayaki shrine, the Andal temple is located at the northwest of the Chennakesava temple. Decorated with artwork such as nature and elephants, this temple of Belur also displays 31 large images of deities from the Shaktism, Shaivism, and Vaishnavism traditions of Hinduism. Friezes showing legends from the ‘Puranas’ as well as intricate carvings of Venugopala, Mohini and Lakshmi can be found here.

7. An Extraordinary Pillar: The Gravity Pillar

Also known as Mahasthambha, Gravity Pillar is a 42-metre-high pillar installed in the middle of the courtyard at the Chennakesava temple. An extraordinary pillar, it stands by itself as it does not have a foundation. Made of a single stone, this pillar in Belur is a testament to the architectural skill during the Vijayanagar era.

Carved with miniature figures from top to bottom, such as the kadale basava (a tiny bull), Narasimha Pillar was built during the Hoysala era and looms at a height of 30 feet. Crafted out of soapstone, this pillar is situated inside the Chennakesava temple in Belur. An artistic marvel, it carries all the unique architectural features of the temple in a miniature form. Initially, this pillar was designed such that it could be rotated freely within a fixed circle.

Popularly known as the big tank, Vishnu Samudra in Belur was constructed during the reign of Narasimha Raya under Padmarasa’s supervision. While constructing the north end of the Chennakesava temple in a quadrangle, Basappa Naayaka of Uttanahalli added a few steps around the edge of the water on all three sides to use the holy water for sacred purposes. To this day, tourists and worshippers use this tank in the daily worship of the temple.

Also known as celestial nymphs, the madanikas are the most popular reason to visit the Chennakesava temple in Belur. Designed with utmost precision, the madanikas are bracket figures that grace the walls of the temple. Depicting various postures and forms of Bharatanatyam, there are a total of 42 madanikas in the temple.

Why Should You Visit These Temples?

Karnataka is a land of diverse traditions and cultures that reflect its rich heritage through the preserved structures of ancient temples. Belur also called Beluhur or Velapura (according to medieval era texts) was esteemed by the Hoysala kings. The temples in Belur speak of the exquisite craftsmanship of Hoysala architecture styles. Each temple has a unique story to tell and isn’t just about worship, but is also about culture.

Visiting these temples with plenty of time is ideal, as the tour is best done slowly so that one may witness ceremonies that are held in honour of the deities, as well as take photographs. As responsible travellers, we should respect these places of worship and follow easily achieved preservative measures. If you love experiencing new cultures and are a history buff, then these temples in Belur are a must-see during your visit to enhance your spiritual, mental and physical well-being.