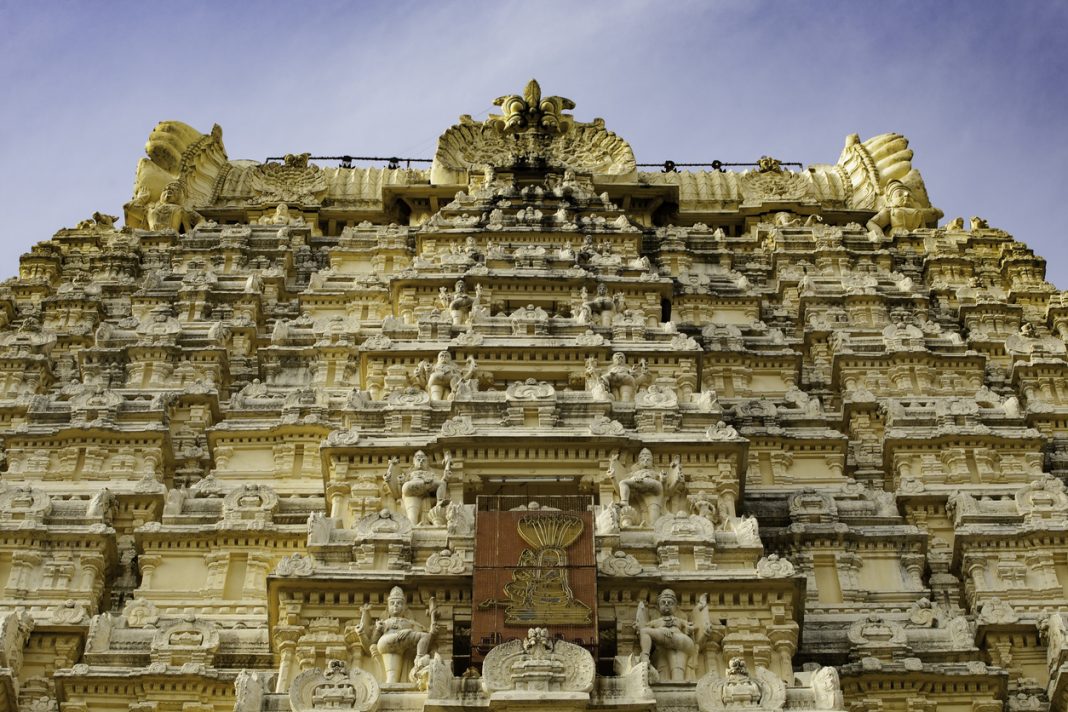 The City of Thousand Temples Kanchipuram is an ancient temple city in the southern state of Tamil Nadu in India. It’s also known as Kānchi or Kancheepuram, and lies 72 kms from Chennai, the capital city of Tamil Nadu. Once the capital of the Pallava dynasty, Kanchipuram is considered one of the most sacred cities in southern India, and the second holiest after Varanasi in the whole country. The city is dotted with various Hindu temples, a few Jain temples, Buddhist monasteries as well as mosques that bear testimony to the excellent craftsmanship of sculptors and artisans of ancient south India. This delightfully enchanting city is a much sought after pilgrimage site for Hindu devotees, and people from all over the world come to admire the many magnificent stone carvings, chariot processions and shrines. The city is also well-known for its traditionally crafted silk sarees, enchanting landscapes, festivals, dynamic culture and exotic cuisine. We’ve compiled a list of temples in Kanchipuram that you simply cannot miss.

Experience Ancient History With These Famous Temples In Kanchipuram

Located on the banks of the Vedavathi river, on the city’s western limits, facing the east, is Kanchi Kailasanathar Temple, dedicated to Shiva. It’s one of the earliest examples of Pallava architecture. Its complex contains a main shrine with a unique 16-sided shivalinga (the symbol representing Shiva) carved out of a block of smooth black granite, encircled by 58 smaller shrines. This stunningly beautiful temple is built with red sandstone and its sub-shrines are also decorated with sculptures or reliefs of other minor deities. The architecture of the temple is an excellent example of this particular style of construction with numerous pillared halls, a vestibule and a pyramidal tower.

An important religious heritage site in south India, Kanchi Kamakshi Amman Temple is situated on five acres of land and has four entrances. The temple is the most beautiful Amman temple after the Madurai Meenakshi Amman and also the primary worship centre for an influential religious institution of south India, the Kanchi Kamakoti Mutt. Dedicated to the goddess Kamakshi (considered the ultimate form of the goddess Parvati), this imposing temple is one of the 51 shakti peethas, or devotional shrines built where the severed body parts of the goddess Sati fell. Though the original structure of this Kanchipuram temple was built by the Pallava kings, the exact details of the temple’s construction are still unknown. Deities are traditionally depicted standing in temples, but here the goddess is sitting in padmasana. She is flanked by the holy trinity of the Hindu pantheon, Shiva, Vishnu and Brahma. The temple’s rich history is often associated with the patron saint of Kanchi Kamakoti Mutt, Adi Shankara. Visit it in  February or March to enjoy the annual chariot festival or ther-vizha, that includes centuries-old customs.

3. One Of The Smallest Temples: Ulagalantha Perumal Temple

Dedicated to Vishnu, Ulagalantha Perumal Temple is one of the sacred 108 divya desams (holy abodes) of the god. This famous Kanchipuram temple covers an area of 5,574 square metres, including four divya desams on its own, namely Thirukkarvaanam, Thirukaaragam, Thiruneeragam, and Thiruooragam. The temple has a statue of Vamana, the fifth avatar of Vishnu, which stands 35 feet tall and 24 feet wide. Its construction is in the Indo Dravidian style, built by the Pallavas, with later contributions from medieval Cholas, Vijayanagar kings and Madurai nayaks. It has grand structures, colossal pavilions, and intricate carvings, and is often mentioned in popular Tamil literary works dating back to the sixth century. It’s located very close to the Kamakshi Amman temple and hosts nearly a dozen annual festivals such as the vibrant brahmotsavam and ther-vizha.

Thiru Parameswara Vinnagaram or the Vaikunda Perumal Temple was built by the Pallava king Nandivarman II in the 7th century. Located in Shiva Kanchi, the temple is dedicated to Vishnu. It is also one among the 108 divya desams dedicated to the god. Vishnu here is worshipped as Vaikuntanathan along with his consort Lakshmi as Vaikundavalli. This Kanchipuram temple is constructed in the Dravidian style and is known for its beautiful sculptures, inscriptions, and paintings. While the temple’s architecture was glorified in the ‘Divya Prabandha’, the early medieval Tamil canon of the Azhwar saints (from the 6th–9th centuries AD), it is currently under the care of the Archeological Survey of India. You’ll find Vishnu’s image standing, sitting and  in reclining forms on towering vimanas, many beautiful lion pillared cloisters, and inscriptions on the wall narrate the history of the temple and the city.

Covering an area of over 40 acres, Ekambareswarar Temple is the largest temple in Kanchipuram. It is one of five main shrines of Shiva and is one of the most famous Hindu temples dedicated to him. Originally, the structure of this Kanchipuram temple was built by the Pallava dynasty in the sixth century, and was later renovated by both the Cholas and the Rayas. The temple features a raja gopuram (entrance tower) which stands at a height of 57 metres and is one of the tallest in south India. It was constructed under the reign of the Vijayanagar king, Krishnadevaraya. In the temple, Shiva is worshipped as Ekambareswarar or Ekambaranathar, which is represented by the lingam, with his consort Parvati as Elavarkuzhali. The temple also houses a small shrine for Vishnu named Thiru Nilaaththingal Thundathan which is another divya desam. While this massive temple hosts the most important religious festivals in Kanchipuram, don’t miss the 10-day extravaganza known as Panguni Brahmotsavam which takes place from March to April.

6. One Of The Most Ancient Vishnu Temples: Varadaraja Perumal Temple

This place of worship was built during the reign of the Chola kings and is one of the most important sites of pilgrimage for followers of Vaishnavism. Dedicated to Vishnu, it’s a part of the 108 divya desams. The Varadaraja Perumal Temple is also known as Perumal Koil and is a part of the trio Mumurtivasam along with Ekambareswarar and Kamakshi Amman Temples. Due to its historic importance, this sacred Vaishnavite shrine draws devotees from all over the world, especially during the 10-day Vaikasi Brahmmotsavam, Purattasi Navratri and Vaikunda Ekadasi. The majestic temple is located in a suburb of Kanchipuram known as the Vishnu Kanchi, and features a 100 pillared hall with sculptures and reliefs depicting various important Hindu gods. The temple’s complex displays over 350 inscriptions attributed to nearly all major dynasties that ruled south India.The site is revered by many Hindu scholars and eminent Vaishnava saints like Bhoothnath Azhwar, Peyalwar,Thirukachi Nambi,Thirumangai Azhwar, Acharya Sri Ramanuja, and Sri Manavala Mamunigal.

7. The Smallest Of The Major Temples In Kanchipuram: Sathyanatheswarar Temple

This seventh-century shrine is located in Thirukalimedu, a town near Indira Theertham Kanchipuram, Kanchipuram. Dedicated to Sathyanatheswarar, a form of Shiva, the temple covers just 2,290 square metres, making it the smallest of the major temples in Kanchipuram. Also called Karaivananathar Temple or Thirukalimedu temple, it’s revered in the 7th-century Tamil Saiva canonical work, the ‘Tevaram’. Sathyanatheswarar is worshipped here with his consort Parvathi as Pramarambikai. While the temple follows the Shaiva tradition, it is also historically significant among Vaishnavites. The temple features a main raja gopuram which is made of three tiers and a sanctum sanctorum that contains a lingam made of granite, another form of Shiva.

This temple is home to a minor Hindu deity, Chitragupta, the assistant of Yama, the Hindu god of death. Chitragupta Swamy Temple is located in Nellukara Street, Kanchipuram, and was built by the Chola dynasty in the 9th century. This mesmerising temple features a three-tiered raja gopuram and a single precinct around the sanctum. Although it is relatively small, it is one of the most prominent tourist attractions in the city. It’s currently maintained and administered by the Hindu Religious and Charitable Endowments Department of the Government of Tamil Nadu. According to legend, Chitragupta kept a watch on the good and bad deeds of men and decided who went to hell and who went to heaven. Visit the temple in April so that you can witness one of the major festivals celebrated there, called Chitra Pournami.

The temples in Kanchipuram are absolute wonders. People from far and wide come to this little temple town to seek blessings and also marvel at the sheer beauty of these mesmerising temples. Standing as a memento of a remarkable history, the temples in Kanchipuram allow you to explore the region’s ancient history and culture. During your visit, remember to respect the decorum of the temple and its sentiments. Visit Kanchipuram’s beautiful and elegant temples, and let us know about your impressions in the comments below.