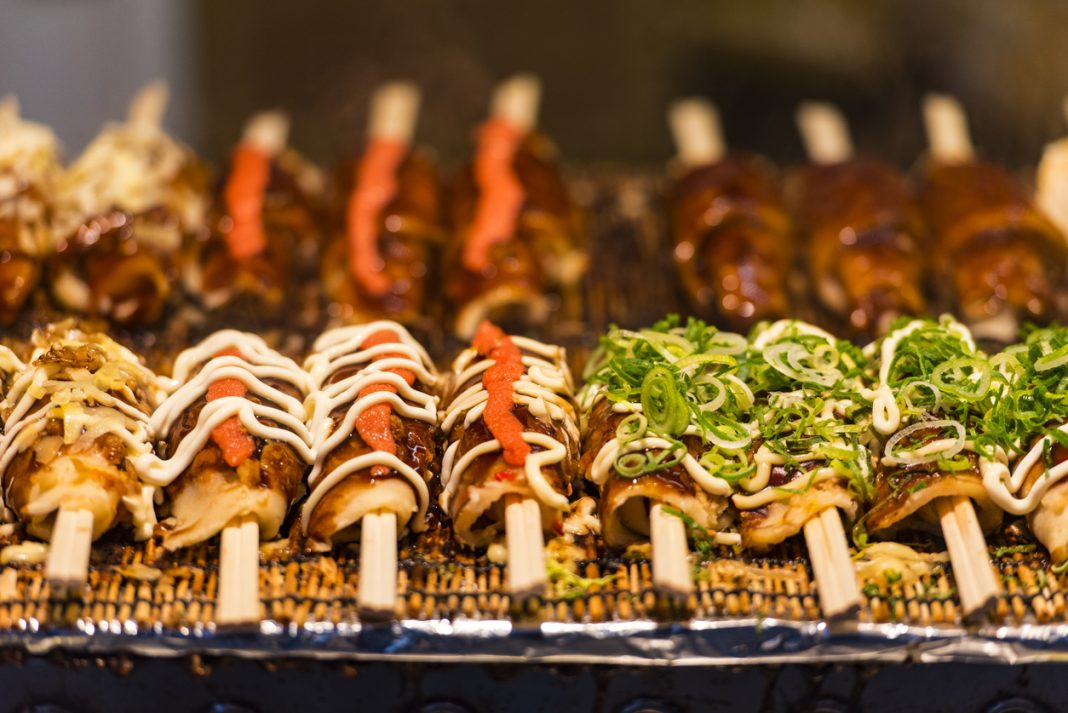 While most of Asia is famous for its street food, the street food culture in Japan is less prevalent. That doesn’t mean street food in Japan is rare to find. While there aren’t many night markets where street food vendors set up shop, festivals in Japan are home to a variety of street food. Yatai or street food stalls are found in many parts of Japan and offer some of the most delicious dishes.

Here’s a list of the best street food in Japan! 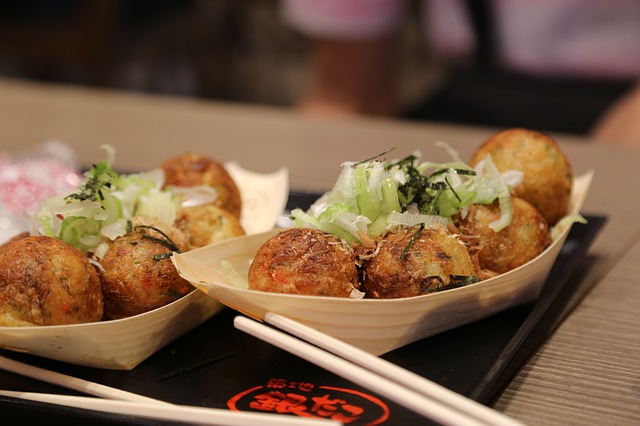 Originally from Osaka, these golden balls of fried batter are filled with tiny pieces of octopus, tenkasu (tempura scraps), benishoga (pickled ginger) and spring onion. The dough balls are fried in cast-iron pans and are skilfully flipped at a rapid pace using chopsticks. They taste when best when eaten piping out.

Takoyaki is slightly crisp on the outside and gooey in the inside. It is accompanied with Japanese mayonnaise, a savoury brown sauce similar to Worcestershire, aonori (dried seaweed) and katsuobushi (dried bonito fish flakes). This delicious treat is widely consumed in Tokyo and throughout other parts of Japan.

Kare pan is essentially a type of okazu pan. This is a term used to describe breads that are filled with savoury ingredients. It is made of slightly sweet dough which is deep fried. Kare Pan has a rich Japanese curry at its centre, making it absolutely delectable. Japanese curry is distinct from other Asian curries because of its comparatively mild flavour. This tasty Japanese treat is crispy outside and tender within, making for a great snack.

Yakisoba is a standard food item wherever you see food carts in Japan. The dish is made of a variety of ingredients. Wheat noodles, pork, cabbage, and onions are fried on a griddle. They are then topped with benishoga, katsuobushi, aonori, Worcestershire sauce, Japanese mayonnaise, and occasionally, a fried egg. The interesting combination of flavours is what makes Yakisoba super tasty! 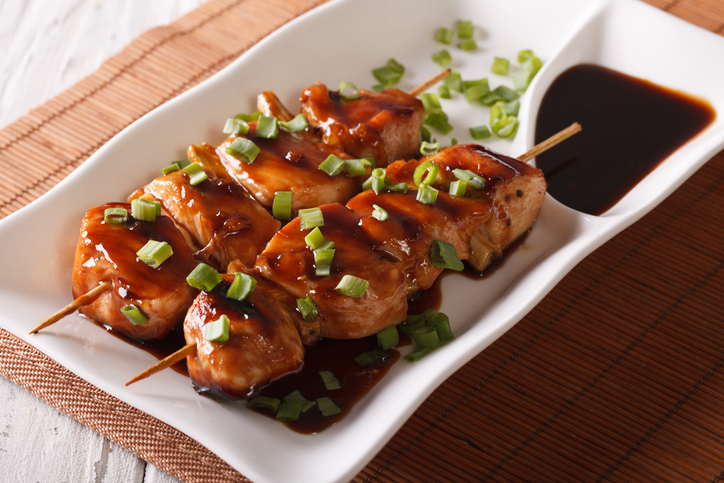 Yakitori is a classic Japanese dish. Chicken skewers are grilled over charcoal and can be found all over the country. All parts of the chicken are used to prepare Yakitori, including the thigh meat, tail meat, and even the skin, each adding their own flavour. It is usually seasoned with soy grilling sauce and salt but wasabi and Japanese mustard are also common additions.

Variations of traditional yakitori include negima yakitori – pieces of juicy chicken thigh and green onion, and tsukune (chicken mince) mixed with other ingredients. It is sometimes also prepared with either pork or beef. 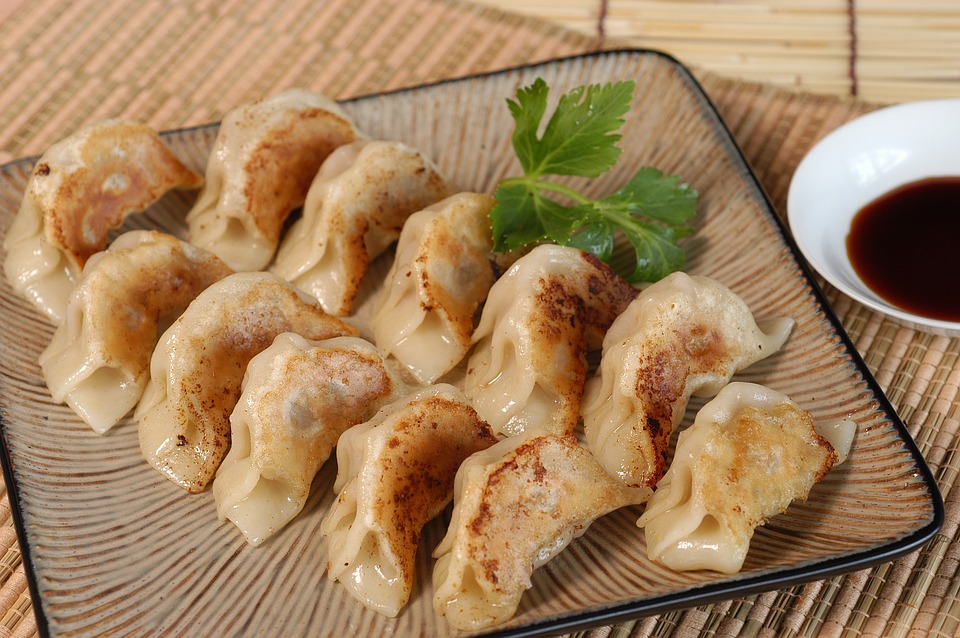 These deep-fried dumplings are generally stuffed with a mixture of ground pork, green onion, nira chives, cabbage, garlic ginger, soy sauce and sesame oil. Served in groups of six, they are eaten with a special dipping sauce made from soy sauce and vinegar. They are frequently served in ramen shops, at festivals and street markets. 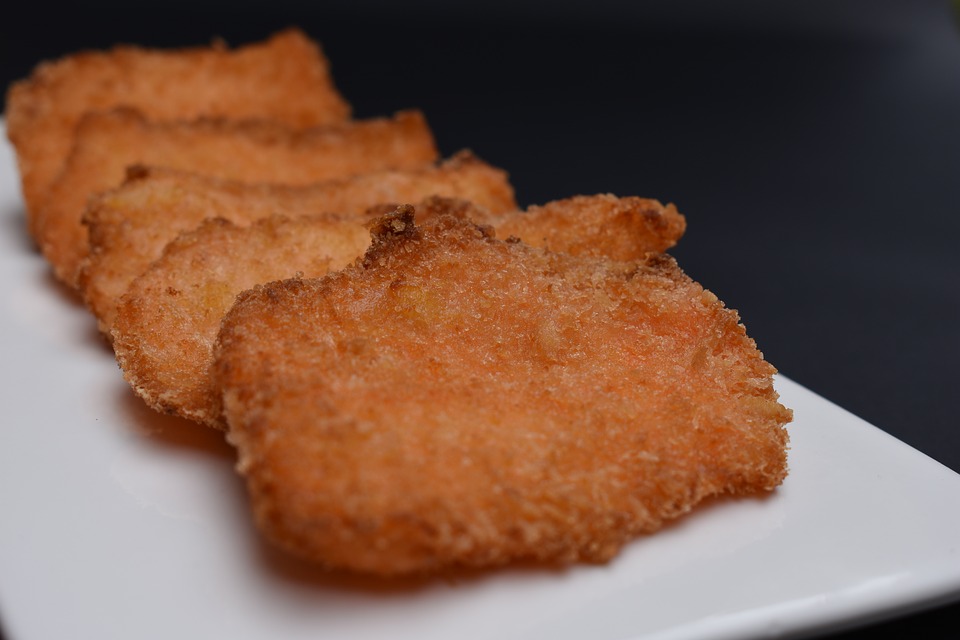 Korokke is a Japanese twist on a traditional French dish – croquettes. It has mashed potatoes or cream sauce surrounded by a breaded and deep-fried patty. They come with a variety of fillings that vary depending on what region of Japan you’re in.

This sweetmeat is made with a batter of eggs, flour, sugar, and water that is ‘baked’ in disk-shaped moulds. Once ready, they turn into golden, bit-sized pieces filled with anko (red bean paste), chocolate, or custard.

Whole-grilled squid on a stick, that’s what Ikayaki is! While it may not sound too appealing, it is absolutely delicious. Fresh, tender squid is grilled over charcoal and then coated with soy sauce and served with a slice of lemon. Meaty and flavourful, it is the perfect snack if you’re on the go!

This is pretty much the Japanese version of corn on a cob. When in season, cobs on a stick are a frequent sighting at festivals. Street vendors boil the corn and then grill it with miso to add a smoky char. It is finally buttered and seasoned with soya sauce. The treat is mostly associated with Hokkaido, the prefecture where most of Japan’s corn is grown. However, you’ll find it in other parts of Japan as well.

This is simple yet flavourful snack consists of baked fish served on a stick. Mackerel is most often used to make Shioyaki since it is a common catch off the coast of Japan. The fish is seasoned with salt to enhance its flavour. You will find this dish available in plenty at festival street stalls.

Have we missed any of your favourites? Tell us in the comments below!