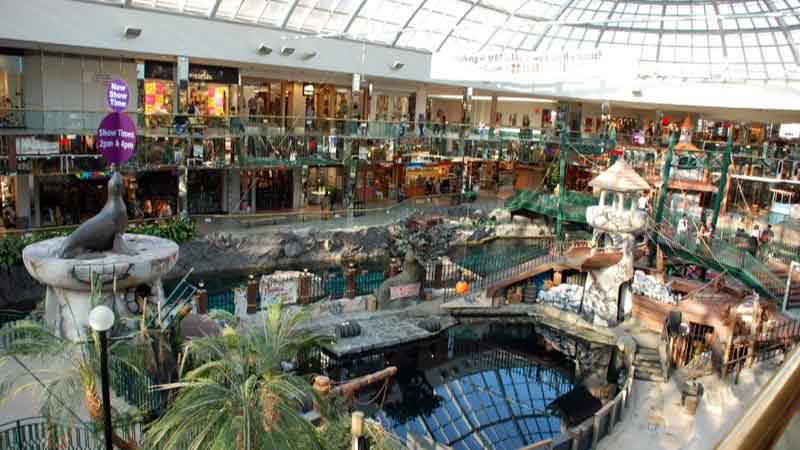 Shopping malls are a one-stop spot for almost anything. People visit shopping malls for various reasons. Some people visit to shop everything from luxury, international brands to groceries whereas for some it’s a place to hang out with friends, catch up on their latest movie or even enjoy a fancy dinner. Gigantic structures that span millions of square feet have become a hallmark of mall culture in many countries. Whether it’s shoes, bags, clothes, or jewelry, we are all entitled to splurging a bit when we travel and these biggest malls in the world cater to all of them.

New South China Mall in Dongguan, China, is the largest mall in the world based on gross leasable area. With a gross leasable area of 6.4 million sq ft, the mall features seven zones modeled on international cities including a replica of the Arc de Triomphe and a canal with gondolas. For the first ten years, only about 1% of its space was in use by retailers, mainly because of the mall’s hard-to-reach position outside of Beijing. The management of the mall decided to do extensive restructuring and renovating of the mall to attract tenants which led to good results taking the mall to its lively state today.

Golden Resources Mall in China was the world’s largest shopping mall from 2004 to 2005’. With a total area of 6 million sq ft, this mall is commonly referred to as the ‘Great Mall of China. The developer of the mall initially estimated that the mall would have 50,000 shoppers a day, as of 2004 the actual number was far smaller. The mall faced problems mainly because of its location which is in the outer suburbs of Beijing city. Another problem was that hampered the prices of most items sold were far beyond the purchasing ability of the local crowd. But with the steep economic growth that China has witnessed in the last few years,  the footfalls at the mall have increased exponentially.

Located in the city of Bangkok Central World Mall is a must-visit place for locals and tourists. Covering an area of approximately 4.62 million sq ft the mall has over 500 stores. Originally called as World Trade Center it has a deluge of entertainment options for adults as well as children. The largest shopping mall in Thailand Central World is one of the many properties set on fire by anti-government protestors in the year 2010. The mall was closed for a brief period and after months of repair works, the shopping complex reopened r with 80% of its retail space open for business.

Opened in the year 2006 with a built area of 4.3 million sq ft, SM Mall of Asia is one of the biggest shopping centers in the Philippines. Consisting of four buildings interconnected by walkways the mall features a   20-seater tram that takes shoppers around the mall grounds.  It has a 2-story entertainment complex with 4D theatre and is also home to the country’s first Olympic-sized ice-skating arena. The IMAX theatre here has one of the world’s biggest screens.

At over 12 million square feet the Dubai Mall is the largest shopping mall in the world based on total area. part of the Burj Khalifa complex which is the tallest man-made structure ever built, the Dubai Mall contains more than 1,200 shops including the world’s largest candy store, an ice rink, a SEGA game center, a 5-star luxury hotel, 22 cinema screens plus 120 restaurants and cafes. The mall also boasts of the largest indoor aquarium in the world.

`The West Edmonton Mall in Edmonton, Alberta Canada, was the largest shopping mall from 1981 until 2004 and is currently the largest mall in the Americas. Besides having over 800 stores, the mall has the largest indoor amusement park in the world, the largest indoor waterpark in the world, and Ice Palace. Other attractions include an 18-hole miniature golf course, a movie theater, and a bowling alley. the second most visited mall in Canada with many attractions for both local citizens and tourists the West Edmonton Mall has a parking facility to accommodate 20000 vehicles.

Located in the Sisli district of Istanbul with a 4.5 million sq ft built-up area, is the largest shopping mall in Europe.  also called “The Sisli Culture and Trade Centre the mall is home to  343 shops, 34 fast-food restaurants, and 14 exclusive restaurants in the shopping center. The mall also offers other facilities which include a large stage for events, 12 cinemas, a bowling hall, a small roller coaster, and several other entertainment facilities. The mall’s roof also carries the second biggest clock in the world.

A classic example of modern architecture Siam Paragon mall is one of the biggest malls in Thailand. With a total area of 3.22 million sq ft, the mall is home to a wide range of specialty stores and restaurants as well as a multiplex movie theatre. If you are looking for a fun day with your family and friends the mall is also home to the Siam Ocean World aquarium, the Thai Art Gallery, and an opera concert hall.

A Day Of Shopping With Fun Activities

A day spent in any of these malls is sure to be a day filled with fun. With numerous stores offering numerous amazing items to be purchased to the various fun activities offer, these malls are a delight to visit. And if you like to shop when you travel, the world’s biggest shopping capitals are probably top of your travel bucket list. And what better to experience shopping while traveling than shopping in comfort in these malls.