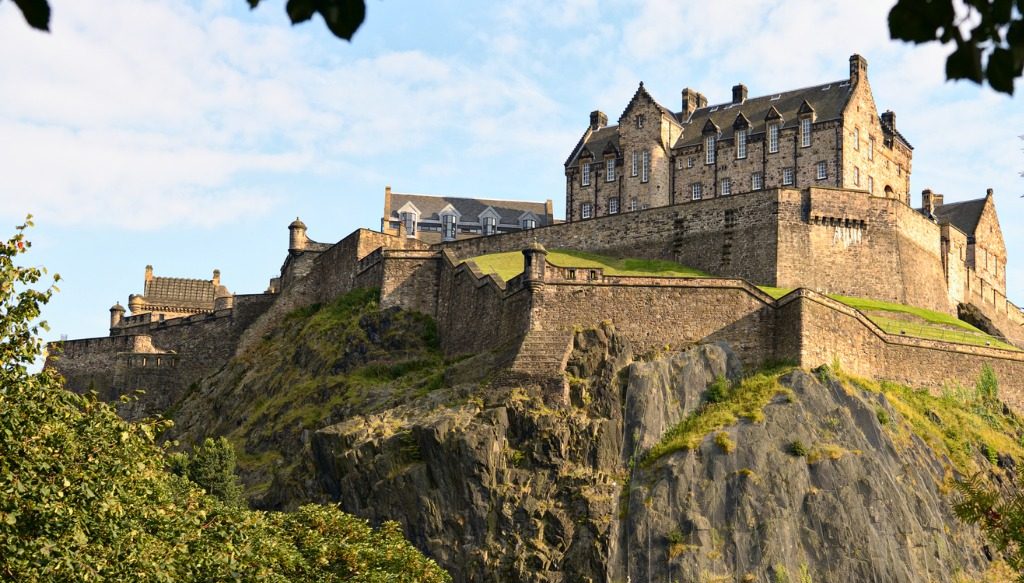 Wherever you go in Scotland, there’s sure to be a castle nearby. Castles are an integral part of the Scottish landscape, and there are thousands scattered across the rugged countryside. From medieval strongholds to fairytale-like turreted châteaux, here are 18 castles in Scotland you have to see:

Also Read: 18 of the Most Stunning Castles in Wales

Set overlooking Edinburgh atop the aptly named Castle Rock, Edinburgh Castle has is one of the most famous castles in Scotland. This sprawling complex dates back to the early 12th century and has been both a stronghold and a royal residence. Don’t miss seeing the Scottish Crown Jewels, the Stone of Destiny, and St Margaret’s Chapel.

This impressive fortress sits atop of a crag on Stirling Sill. It was also a royal residence, and many Stewart kings and queens were crowned here. The castle dates back to the 12th century, though a majority of its buildings are from the 15th and 17th centuries.

This famous castle is set amidst the picturesque highland landscape on a small island. It is surrounded by three sea lochs – Loch Alsh, Loch Duich, and Loch Long. Steeped in Jacobite lore, the castle was also the stronghold for the Mackenzie and Macrae clans. The castle dates back to the 13th century but was destroyed in the 17th century. It was rebuilt in the 20th century and can be seen featured in multiple films.

Located in the lowland valley of Strathmore, this castle was made famous by being featured in Shakespeare’s Macbeth. Built around an old tower house the 10th or the 11th century, it became the seat of the Earls of Strathmore and Kinghorne int he 14th century. It was also the childhood home of, Queen Elizabeth, the late Queen Mother.

Also featured in Shakespeare’s Macbeth was Cawdor Castle. This was the 14th century home of Clan Cawdor, before falling the hands of the Campbells in the 16th century. The castle is famous for its 300-year-old gardens, as well as its Tapestry Bedroom and the Old Kitchen.

Balmoral Castle is located in Aberdeenshire, and has been used as a private residence by members of the Royal Family since 1852. It is open to the public when they are not in residence.

Opulent and glamorous, Culzean Castle overlooks the Ayrshire coast. It is surrounded by over 600 acres of lush woodland and landscaped gardens. The 18th-century Scottish castle is built in the neo-classical Georgian style for the Earl of Cassilis, and is also known for the sea caves that lie at its base.

Dunrobin Castle is the largest castle in the Northern Highlands. Located along the coast near Dornoch, this French-style castle is also the most northerly great house in Scotland. It dates back to the early 12th century and its fairy-tale spires were added in the 19th century. It is the home of the Earls (later the Dukes) of Sutherland, and features 189 rooms.

This grand castle in Aberdeenshire features a Z-plan, where the main tower house is flanked by wings or towers at diagonally opposite corners. Dating back to the 16th century, and built over 50 years, its towers also have panoramic views of the gardens and estate that surrounds the castle.

Set in the heart of the Cairngorms National Park, this majestic 17h century castle is home to the Earls of Mar, and the chiefs of Clan Farquharson. Initially a hunting lodge, the castle is now famous for its turrets, winding spiral staircases and dungeon.

Situates in Kelso, in South-East Scotland Floors Castle is the residence of the Duke of Roxburghe. It overlooks the River Tweed and is the largest inhabited castle in Scotland. The castle is full of priceless art, tapestries and antiques. The central symmetrical Georgian building dates back to the 1720s, and the turrets and battlements were added later, in the 19th century.

This extremely scenic castle near Dalmally in Argyll lies on a small rocky island on Loch Awe. It was built in the mid-1400s by the Campbell clan. They controlled large areas of western Scotland during the late medieval period. Don’t miss the breathtaking view from the top of the battlements.

A Gothic Revival-style castle in Argyll, Inveraray Castle dates back to the 18th century. It is the seat of the Dukes of Argyll, chiefs of Clan Campbell. It is known for its elegant neoclassical interiors, and for its views of Loch Fyne. Parts of the popular TV show Downton Abbey were also filmed here.

This beautiful castle in Aberdeenshire dates back to the 13h century. Over the course of its long history, it has passed through the hands of five different families, each adding significantly to the building. Today, the castle is filled with rich interiors and noteworthy antiques.

Set in a moat, this triangular castle is known for its imposing sandstone walls and tall towers. Located near Glencaple in Dumfries & Galloway, Caerlaverock Castle sits within a nature reserve. It also has a fascinating siege warfare exhibition.

Sitting on a high crag on the Isle of Mull, the 13th century Duart Castle is the seat of Clan MacLean. The castle was in a state of ruin after the 18th century, but was restored in 1911 by Sir Fitzroy Maclean.

Set along the Firth of Forth near Linlithgow, the impressive 15th-century Blackness Castle was built by the powerful Crichton family. It has an unusual shape, meant to resemble a ship, which has also earned it the nickname, ‘the ship that never sailed’.

Dunvegan Castle is the oldest continuously inhabited castle in Scotland. It sits beside Loch Dunvegan on the Isle of Skye, and has been home to the Chiefs of Clan MacLeod for 800 years.

There are many more castles in Scotland that you can visit. So, if we’ve missed any of your favourite ones, be sure to share them in the comments below.