Delhi is literally an astounding cornucopia of history, culture, cuisine, commerce and street life, which will give countless opportunities to discover fun, food, and places in different ways that can give you some finest days and experiences. Personally I would recommend so many things for you all to see and do in Delhi (for first-timers), but keeping the time and word constraint, the first suggestion that pops in my mind is: Drop the 10 most visited spots in Delhi, and pick what the locals see and do. Well, you must be wondering what are they? Well, I am here to help you with that. So come along with me and have a look at this list I have compiled which contains places to see and things to do in Delhi – like a local.

My Recommendations For Things To Do In Delhi (As A Local)

A Walk In Lodhi Gardens 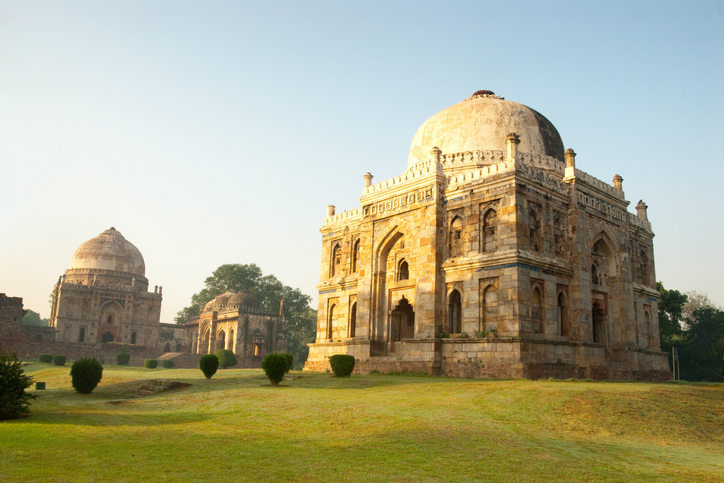 Start your morning with a refreshing walk in Lodhi Gardens. A walk to the gardens here is a very local thing to do. Indulge yourself in lush greenery and serenity of this public park that’s scattered with ancient Mughal tombs and structures. Located at the heart of the city, this park’s royal architecture of 15th century, blooming flowers and expansive vistas of green will allow you to take a breath of fresh air and take a leisurely stroll.

Adding to that, walk 10 more minutes and you can even see the famous murals of Lodhi Art District. All these cool artworks are found in different areas in the district. So, you will need to walk around for a while to find all of them. This is India’s very first open public art district and is open 24/7.

If you love books, I have a PURRFECTTT place for you to visit in Delhi. Every Sunday, Daryaganj Sunday Patri Kitab Bazaar, appeared in Daryaganj, Old Delhi. It was a 2 km road filled with books on both sides. But recently the five-decade-old heritage book bazaar has been relocated to Mahila Haat, a site convenient and close to the original location.

While the Bazaar has lost its aesthetics of walking on the streets of Daryaganj, you can still buy books per kilo or fill boxes. I don’t think anything can prepare you for the sheer volume of books that you will be seeing at this market; especially when they are dirt cheap! The range of books you will find is staggering—from fiction to science, art (or even coffee table books)—this market has got something for every kind of reader!

When I was a child, I have vivid memories of boat rides in Purana Qila. But, as that is not an option anymore, you can visit one of the oldest forts in India along with its light and sound show which is called “Ishq-e-Dilli” or for the Love of Delhi.

Standing amidst lush greenery and tranquillity, you can experience the spectacular display of light and sound show in the evening which takes you on a journey from the Mughal era to the British period to current day Delhi. Held every evening 7 – 8 pm (Hindi show); 8.30 —9.30 pm (English show); keep in mind that the show is off on Fridays. 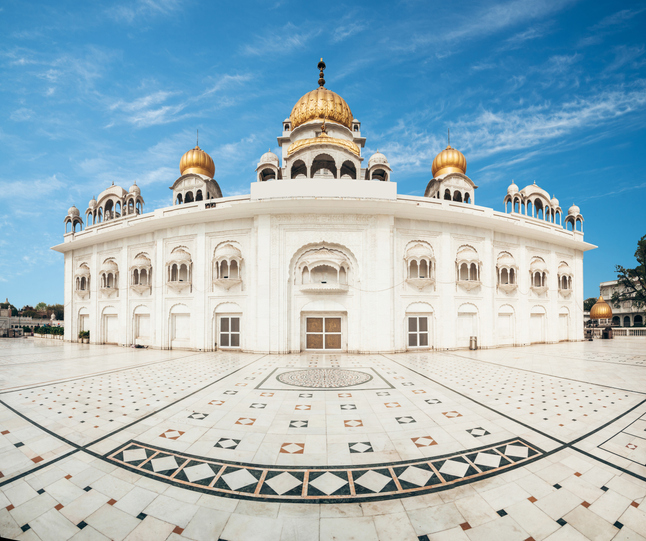 As far as I remember, Gurudwara Bangla Sahib has always been the friendliest and the most welcoming temple I have ever visited. Situated on Baba Kharak Singh Marg, it can be easily recognised by its golden dome and tall flagpole, Nishan Sahib. The Gurudwara is one of the most prominent Sikh Gurudwaras in Delhi and is visited by various people of different religions, races and nationalities.

Nothing can beat the serenity this temple offers. It houses the main prayer hall (containing the Granth Sahib, the holy book of the Sikhs), the water tank in the middle (Sarovar), a library, a museum, a hospital, a school and an art gallery. Don’t forget the freshly made hot prasad and of course experience langar (all people, regardless of race or religion may eat in the Gurdwara kitchen (langar hall). I cannot recommend this enough!

Visit One Of The Largest Mosques In India 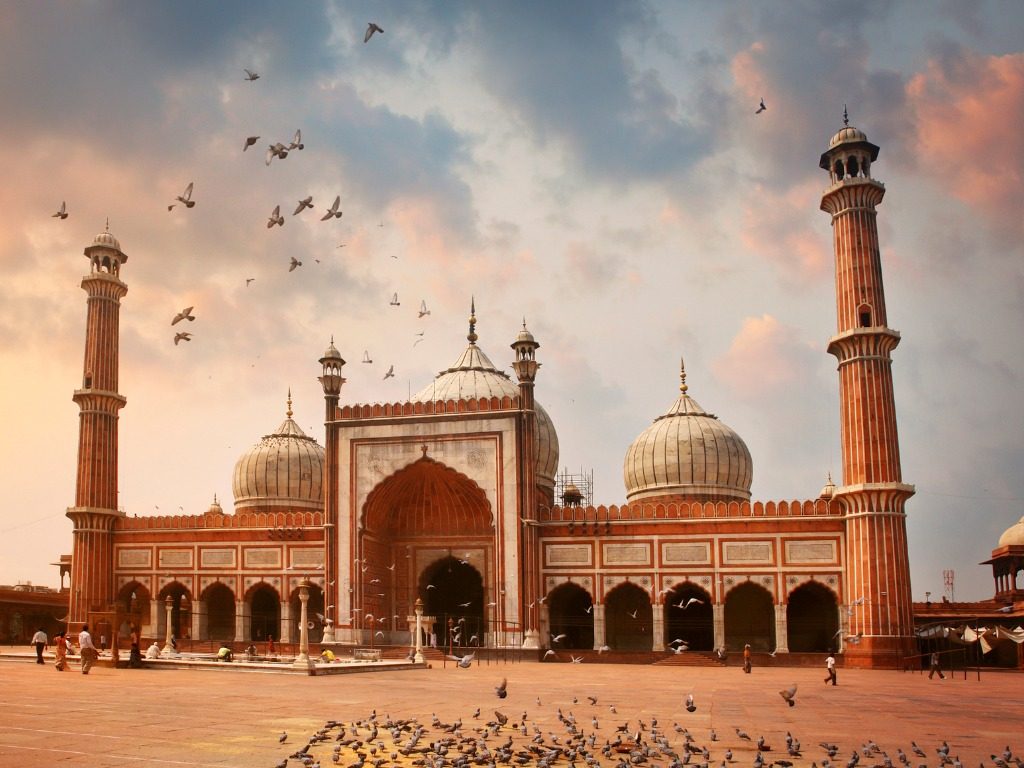 Don’t roll your eyes at me. I know it might sound clichéd, but you need to explore Jama Masjid at least once in your life. Now just a friendly warning that yes, it’s going to be quite crowded, so prepare yourself for it in advance.

Located in Old Delhi, India’s Jama Masjid was built between 1644- 1656 and features a striking red sandstone and marble exterior. It is one the largest mosques in India with a courtyard capable of holding 25,000 devotees at once. With an impressive collection of relics, you’ll also find a Hauz (a pool) at the centre of the courtyard, where the believers their feet, hands, and face before entering for prayer. Take a break from your Delhi explorations and climb the mosque’s minaret in the late afternoon for epic views of stacked rooftops, soaring vultures and twirling kites. If the climb has whetted your appetite, you can always reward yourself with a classic non-veg meal nearby at Karim’s or Al-Jawahar.

Also Read: 33 of the most beautiful mosques in the world

The Akshardham Temple is a Hindu temple located on the banks of river Yamuna that looks at Swaminarayan’s life. It is constructed from pink-hued Rajasthani sandstone and Carrara marble; contains over 200 murtis – objects depicting deities. This spiritual campus was opened in 2005 but the most interesting fact is that it was built with the 300 million volunteer workers. Described as an eternal place of devotion, purity, and peace, this temple is perfect for sightseeing, exploring and pilgrimage. The boat ride at this place is mesmerizing. 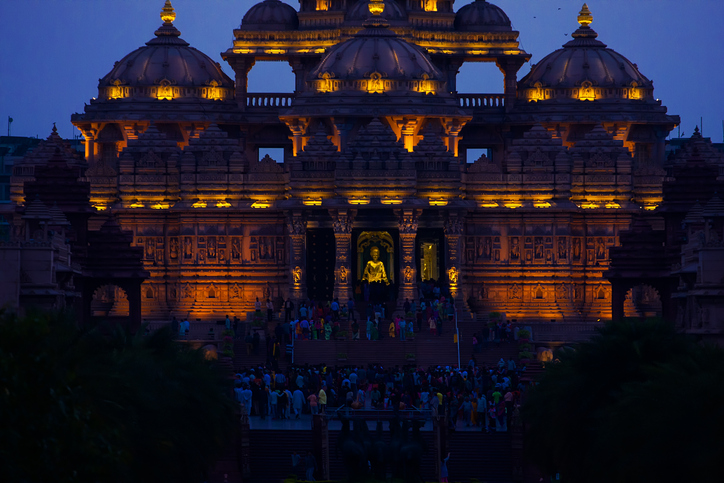 As someone who has been here twice, I would give you an option of either taking the entire tour of the temple (which takes an entire day with no phones, no leather-made objects such as wallets or belts) or just stay for the Musical Fountain Show that only happens after sunset. I mean, you can surely check the whole tour if you are interested, but I would seriously recommend that you must not miss this charming water show. As the sun sets, take a seat at this traditional step well and transport yourself to the courtyard of the gods to watch the innocence of children challenge the powers of the mighty!

I don’t know if you’ve heard about it but, Majnu ka Tila in North Delhi is a residential area of the Tibetan refugees—those who fled from Chinese oppression and came with the Dalai Lama. Also known as New Aruna Nagar, this area was originally built as a settlement with its quaint Buddhist temples and monasteries. Today as you enter, it might seem as if you’ve stepped inside a Tibetan hilltown. It is particularly popular because of its inexpensive but excellent fashion stores and easy on the pocket Tibetan cuisine. Trust me and go treat yourself to some Laping here! 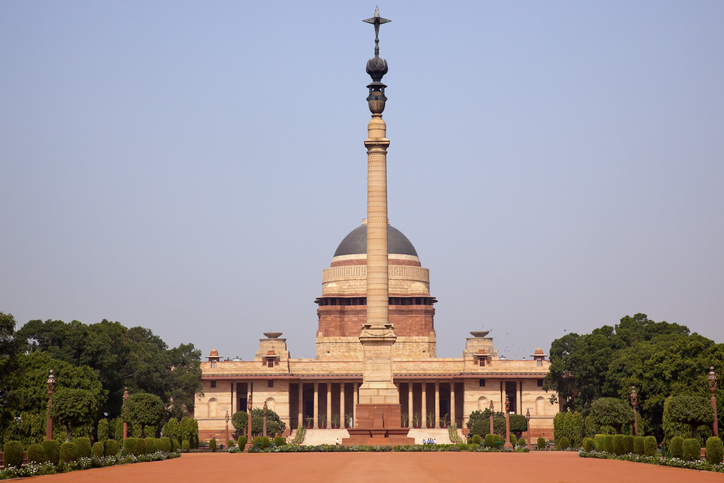 Rashtrapati Bhavan is the official residence of the President of India and while you can see the exterior of this 200,000-square-foot palace while visiting India Gate or just taking a stroll at Rajpath, it is nothing in comparison to the grandeur of the inside. You can visit the splendid palatial building (which is also the largest residence of any head of the state in the world) by a registration process which can be accessed online. So experience the grandeur of this majestic presidential palace along with the stunning Mughal Gardens. Don’t forget to witness the change of guard ceremony LIVE (held every Saturday morning) on the forecourt of the Rashtrapati Bhavan.

After Dinner Walk To India Gate

We all know about the “Delhi Memorial” (official name) or India Gate standing 42 meters high at the centre of New Delhi. This war memorial is located astride the Rajpath, on the eastern edge of the “ceremonial axis” of New Delhi and is one of the most visited tourist attractions in Delhi. 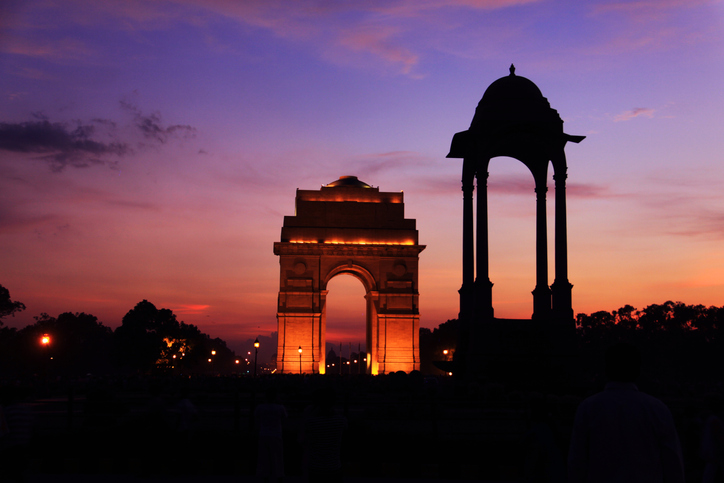 After attending the session and the change of guards, you’ll probably go back to have dinner—to your hotel or wherever you have been staying- after that I would highly recommend going for an evening walk to India Gate- while it is going to be crowded especially during the weekends, try and just take a walk in that area. My family had this tradition of coming here after dinner and having ice cream. We’d fit or try to inside one car and just come for a night stroll. Spend the evening walking around the beautiful lawns of this war memorial and enjoy the night view with ice-cream or chuski or bhutta or local papads that are sold right there by street vendors.

I hope this article has given you new places and new things to do in Delhi on your next trip. Have we covered all your favourites on this list? If not, let us know in the comments below!

Popular Curries Of India From Across The Country

15 Highest Lakes In India Which Are An Icy Spectacle

Eleven of Our Planet’s Beautiful Landscapes

Get Mesmerized By The Beauty Of The Valleys In India 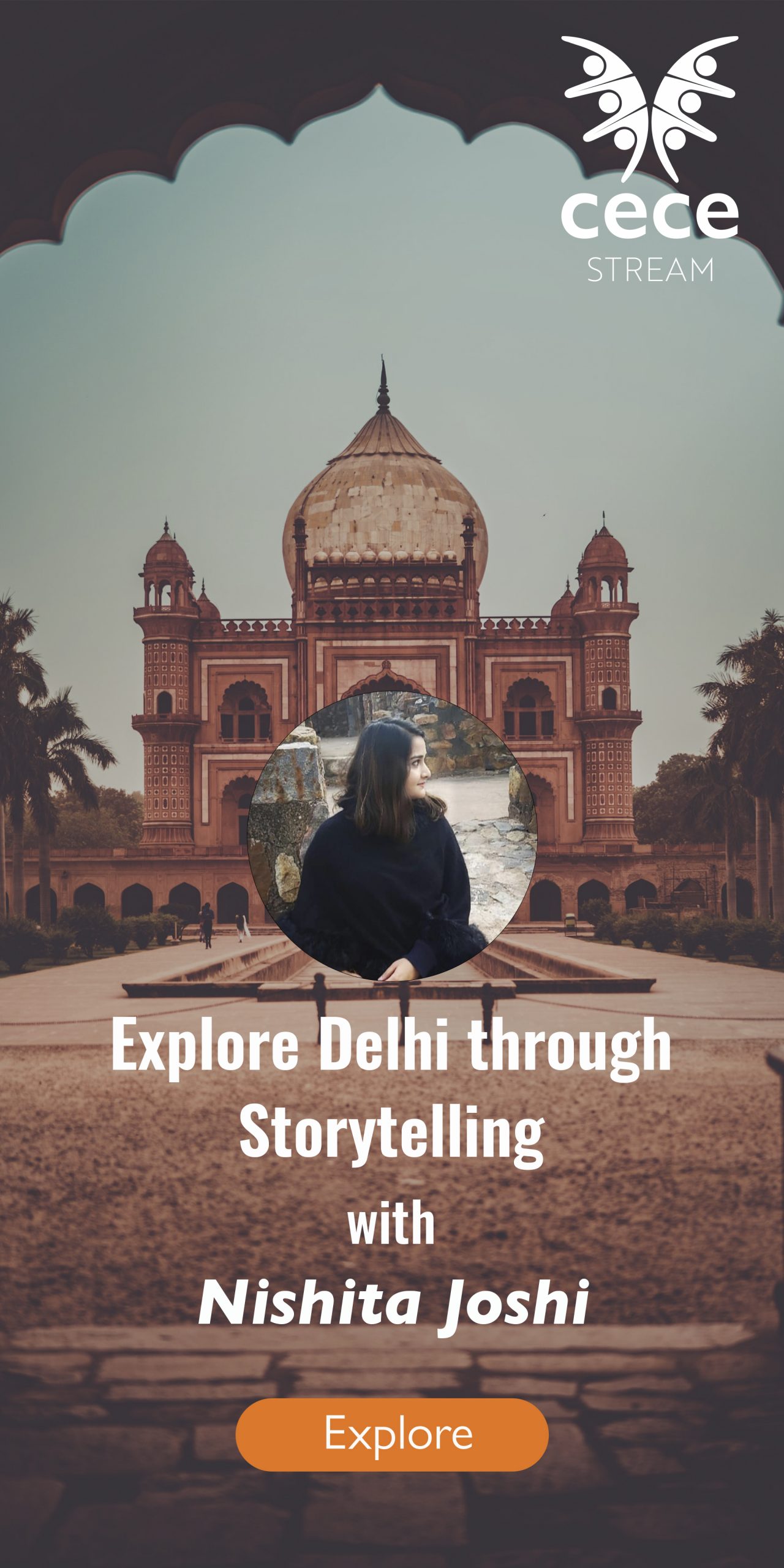