More
Home Topics of Interest Culture Travel Here Are The Top Things To Do In The Industrial City Of... 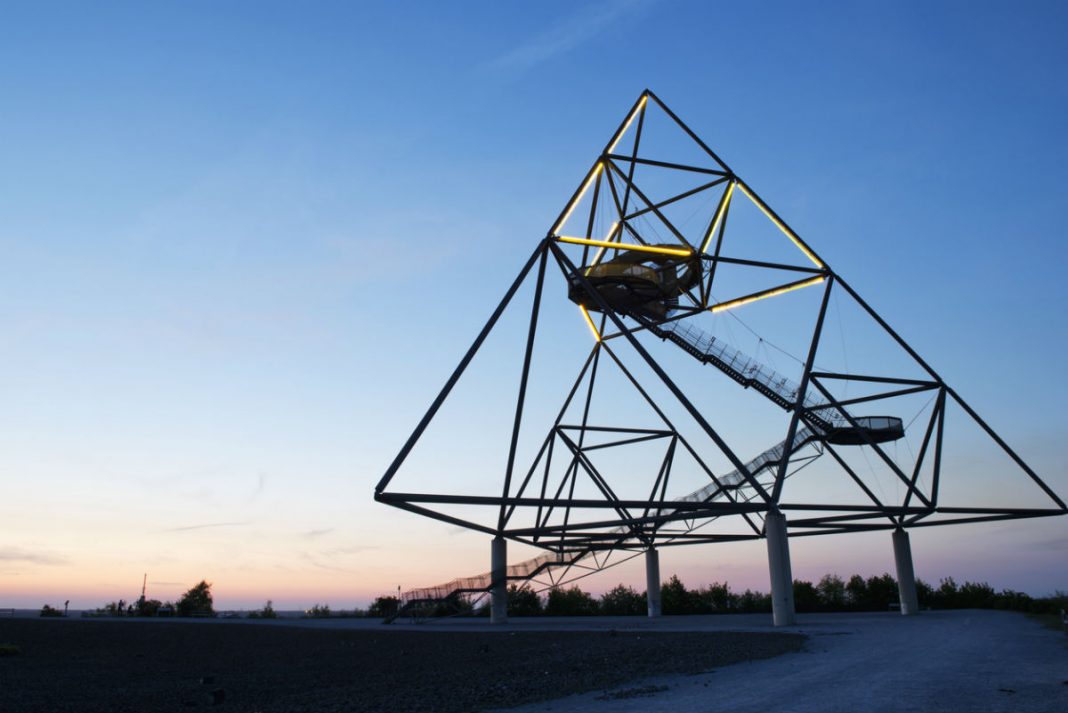 The city of Bottrop is a jewel of the former rich industrial area of Ruh, Germany. Bottrop is situated in west-central Germany, on the Rhine-Herne Canal, in North Rhine-Westphalia and adjoins Essen, Oberhausen, Gladbeck and Dorsten. This city had been a coal-mining and rail centre; it still contains factories producing coal-tar derivatives, chemicals, textiles, and machinery. Here, you can see how the disused industrial infrastructure has not been discarded but instead, it is given a new lease of life with art, adding ample character to the city’s skyline.

Places to Visit in Bottrop

In the Stadtpark is a museum dedicated to local much-loved son Josef Albers, who was a gifted Bauhaus artist and educator. He is known for his explorations of colour and spatial relationships, squares in particular. This minimalist museum has the best works of Albers, including Expressionist paintings, engravings, glassworks and photomontages are on display. However, the highlight in this museum space is examples from Albers’ key series Homage to the Square, as well as early lithographs from the Bottrop period.

Located at the very north of the municipality, in the Kirchhellen-Feldhausen district in Bottrop, is a Late Baroque palace called Schloss Beck. Built as a “Maison de Plaisance” between 1766 and 1777 by Johann Conrad Schlaun, it is currently run as an amusement park. This park has a dual appeal to it: younger children (aged 3-13) can enjoy the rides while the grown-ups can appreciate the architecture of this Baroque castle dating back to the 1770s and the fully restored interiors. 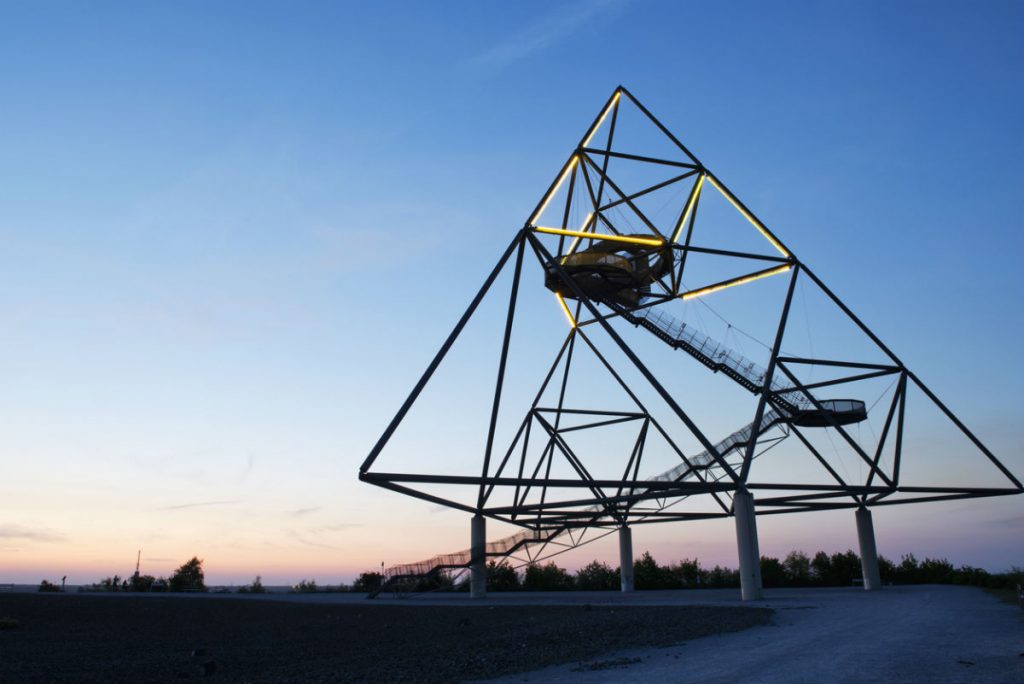 Overlooking the city of Bottrop is Tetraeder: a walk-able steel sculpture atop a mine dump which is now known as the icon of the city. This unique metal art installation is one of the most striking stops on the Ruhr Valley’s Industrial Heritage Trail. This structure, with a side length of 60 metres in the shape of a tetrahedron, is made from steel pipes atop a massive slag-heap-turned-landscape-park. It was designed by architect Wolfgang Christ in 1995 and has a stairway that coils up to just below its highest point. So you can climb these ‘floating’ staircases suspended from steel cables, and you will be rewarded with sweeping views across the beautiful Ruhr area. This triangular pyramid is illuminated at night and therefore glows from afar.

Another amusement park located in Bottrop is Movie Park. This is one of the most loved amusement parks in Germany and is right just next door to Schloss Beck in Bottrop-Kirchhellen. The huge park is organised across seven Hollywood-themed zones namely Hollywood Street Set, The Old West, Santa Monica Pier, Adventure Lagoon, Streets of New York, Nickland and Federation Plaza. Each zone has a series of thrilling rides, stunt shows, mazes and audiovisual shows based on movies and TV shows which are suitable for all age groups.

If you are planning to visit during autumn, you’ll be right on time for the Halloween Horrorfest, when the park has six horror-themed mazes and more than 250 actors playing spooky characters. 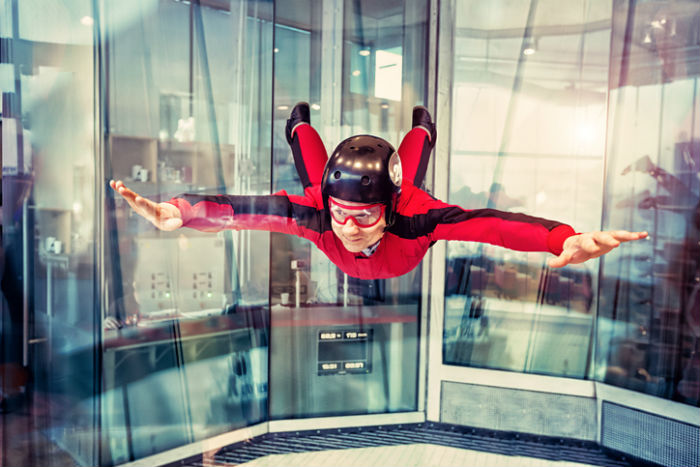 This record-breaking sports attraction was opened in 2008 and as the name suggests, let’s you can experience freefall skydiving without having to leap from a plane. Indoor Skydiving Bottrop is not just Germany’s first indoor skydiving wind tunnel but it is also one of the highest vertical wind tunnels in Europe. Anyone aged four and up will get to experience the adrenaline rush of super-realistic flying and freefall simulation in a 14-foot, fully-glazed flight chamber with a maximum airflow speed of 286 km per hour-all with the guidance of expert instructors.

Let’s introduce a generous dose of creepy in your vacation with the award-winning horror theatre Grusellabyrinth. With its large cast of actors, 16 labyrinths, themed trails and interactive shows, all with high production values and a wide array of props, Grusellabyrinth is Germany’s largest themed horror attraction. While catering to adults and adolescents fans of horror, it also has lighter and more family-friendly experiences appropriate for children aged eight and up.

Best out of waste? Well, you can see an actual example here at Berne Park. Located between the Emscher River and the Rhine-Herne Canal, this used to be a sewage treatment plant up until 1997 and then was transformed into a park. It now has abundant greenery, water bodies, cycling trails, walkways, restaurants and a metal bridge.

Berne Park revaluated industrial architecture and combined it with art and nature through this makeover. However, you can still see a lot of machinery and infrastructure that has been left in place, including bulky concrete tubes that are now cabins for the park’s hotel or the basins that used to contain sewage and are now gardens. Do visit the former machine hall that is now a restaurant with a spacious outdoor terrace.

While coal mining has almost died out as an industry in the Ruhr, Bottrop is one of just a few municipalities that still have an active mine. The Prosper colliery that dates back to 1861 is still in business. Out of the nine shafts sunk over the last 150 years, two are still in use: Prosper IV and Prosper V.

But away from all this activity, Zeche Prosper II hosts many of Bottrop’s attractions such as Tetraeder and the Grusellabyrinth, mentioned above. It is one of the very few surviving coal mines in the Ruhr area and is known for its majestic headframe and machine tower, dating to the 1910s.

Visit the Ruhr city of Bottrop and do let us know about your experiences below!