More
Home Topics of Interest Culture Travel Tipu Sultan’s Palaces: The Many Homes Of The Tiger Of Mysore 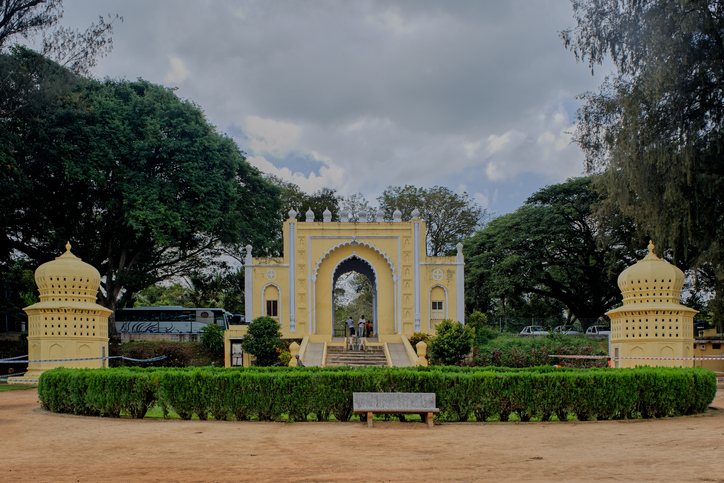 Tipu Sultan was one of the fiercest kings to rule the Kingdom of Mysore. The fierce king ascended the throne after the death of his father, Hyder Ali, in 1782. During their rule, both Haider Ali and Tipu Sultan built palaces in the kingdom. The Tipu Sultan Summer Palace in Bangalore and the Daria Daulat Bagh Palace in Srirangapatna were both built by Tipu Sultan during his rule. These were the seats of power in Mysore after Hyder Ali wrested power from the Wadiyars in 1761. Tipu Sultan’s palaces are equally impressive and as beautiful as their counterparts in Mysore.

Tipu, who is also known as the Tiger of Mysore, was a pioneer in rocket artillery. The Mysorean rockets, the first iron-cased military rockets were deployed successfully against the British army during Hyder Ali’s and Tipu’s time. Tipu expanded these rockets during his time and even set up a laboratory in Bangalore for his rocket project. He is renowned for the military manual he wrote, the ‘Fathul Mujahideen’.

But his never-ending rivalry with British Imperialism ensured that the Kingdom of Mysore went to war with the British constantly. Tipu was killed in 1799 in the Fourth Anglo-Mysore War. He was buried next to his father, Hyder Ali, in the gumbaz (mausoleum) outside the palace. But his palaces, which were once the hub of administration in his kingdom, remain. Tipu Sultan’s palaces are now managed by the Archaeological Survey of India.

Also Read: 15 royal and magnificent palaces to visit in India

One of Tipu Sultan’s palaces is the Summer Palace in Bangalore. The palace was originally commissioned by Tipu’s father, Hyder Ali. After Hyder Ali wrested power from the Wadiyars in Mysore, he felt it made more sense administration-wise to move to Bangalore. So, in 1778 the foundation for the new palace was laid inside the walls of the Bangalore fort. But Hyder Ali died before the palace was completed.

The Summer Palace, which is located in present-day Chamarajpet, was completed in 1791 during Tipu’s rule. During this time, this summer residence was the nerve centre of all administrative activity in the kingdom. According to researcher Narendra KV, Tipu’s summer residence was as significant to the Mysore kingdom then as the Vidhana Soudha is to present-day Karnataka.

The Kote Venkataramana Temple inside the fort lies to the east of the palace and towards the south is the Karanji Lake. The two-story structure is built entirely of teakwood in the Indo-Saracenic style of architecture. The palace is adorned with pillars, arches and balconies and the walls and ceilings of the palace are adorned with intricately carved wood. The walls of the palace are decorated lavishly and sport frescoes of battles and several portraits of Nawabs.

The two-story palace is symmetrical and has lofty walls and a wooden mezzanine floor. 160 pillars and arches support this mezzanine floor. It is believed that Tipu conducted his darbar (court) from the eastern and western balconies of this floor. The four rooms in the corners of the first floor are believed to have been the zenana (women’s wing). Also on site is a beautiful painting of a golden throne, one that was visualized by Tipu himself. The grand, gold-plated throne was embellished with emeralds and precious stones. It is believed that Tipu vowed to never use the throne until he had routed the British army. However, Tipu died before he could achieve that dream, and the throne was dismantled by the British and auctioned off.

After Tipu’s death, the British Administration used it for its secretariat until the Attara Kacheri was built. Once the administration shifted, the palace was used as a government storage yard and then later, it was converted into a printing press. The ground floor of the palace has been restored and is now a museum. It showcases the achievements of the king and his administration and also has paintings of the people and places of that time. Also displayed are the silver vessels given to Hyder Ali and Tipu’s clothes and crown. The clothes and crown of the king are displayed on silver and gold pedestals.

Just 22 kilometres from Mysore, in a small town called Srirangapatna, lies the Daria Daulat Bagh. The beautiful palace built in the Indo-Saracenic style is another of Tipu Sultan’s palaces. The tiny town on the Mysore-Bangalore highway has a lot of historical, religious and cultural significance. The palace, which was the home of the Tiger of Mysore, stands amid beautifully manicured gardens. The beautiful laid-out gardens feel like an oasis in the heat of Srirangapatna.

Daria Daulat Bagh, which translates to Garden of the Sea of Wealth, was built in 1784. The palace is built on a raised platform in the Indo-Saracenic style and has a rectangular plan. The teakwood palace has open corridors along the four sides of the platform. The audience hall is divided into four rooms at four corners by four partition walls. The central hall of the audience hall connects the eastern and western wings. All the walls, pillars, canopies and arches are decorated with colourful frescoes. The frescoes in the outer walls represent battle scenes and portraits, while the inner walls are decorated with scrolls of floral patterns.

The palace walls also have several paintings depicting the armies of Hyder Ali and Tipu going into battle. Other paintings representing the scenes of darbars of different kings and queens across the Indian subcontinent also decorate the walls of the palace. This includes the darbar of the king of Mysore, the king of Tanjore, the queen of Chitor and several others. The top floor of the palace has been converted into a museum and is now the Tipu Sultan museum. A collection of Tipu memorabilia, European paintings, and Persian manuscripts are displayed here.

Tipu’s Fort, where he died fighting the British army, lies close by, but it is in ruins. The Lal Mahal, which is another of Tipu Sultan’s palaces, also lies in ruins near the Daria Daulat Bagh. Just outside the Daria Daulat palace is the gumbaz (mausoleum), where Tipu and his family are buried. The mausoleum was built by Tipu Sultan to bury his parents’ remains.

The present doors of the gumbaz are made of ebony and ivory, and were installed by Lord Dalhousie when it was renovated. The original doors are displayed at the Victoria and Albert Museum in London. The gumbaz, which is built in the Persian style, sits in the middle of a large rectangular cypress garden. It is believed that Tipu collected different species of flowering trees and plants from Persia, Ottoman Turkey, Kabul and French Mauritius, which are planted in the cypress garden.

Also Read: 10 fascinating things to do and see in Srirangapatna

Relics Of The Past

Tipu Sultan’s palaces were once the seat of power, from where he ruled the kingdom of Mysore. Today, the forts that he built and waged wars from, lie in ruins. The palaces are now just a relic of the past, a reminder that Mysore once was ruled by The Tiger of Mysore. Both of Tipu Sultan’s palaces are equally beautiful and impressive. These historical monuments tell the tale of the man who relentlessly fought British Imperialism.

Both of Tipu Sultan’s palaces are open to the public and are major tourist spots in Karnataka. The Summer Palace in Bangalore is open to visitors on all days of the week from 8.30 AM to 5.30 PM. Visitors have to pay an entrance fee and buy tickets to visit the palace. Photography inside the palace is strictly prohibited, unless visitors have special permission. The Daria Daulat Bagh in Srirangapatna is open to visitors from 9 AM to 5 PM. The entrance fee for Indians and SAARC citizens is INR 20 and foreigners are charged INR 250.

Also Read: 7 must-see palaces in Mysore that make it the “city of palaces”