Though quite similar to South Indian food, Sri Lankan Cuisine has its own distinct personality. Every dish is uniquely spiced with a Sri Lankan flavour, even those that have foreign roots.

From desserts to snacks, most dishes use locally grown fruit, seafood, and, most importantly, spices. The use of bold, flavorful spices is so characteristic to Sri Lankan cuisine, that it led to the island nation being dubbed ‘Spice Island’.

Here are 11 Sri Lankan dishes you absolutely have to try: 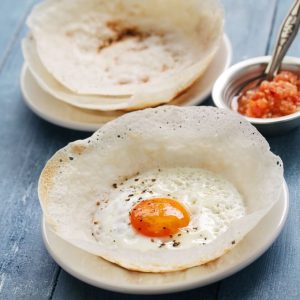 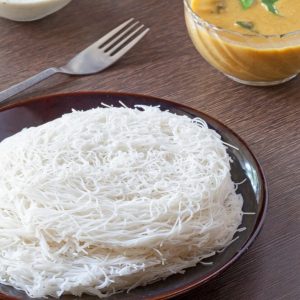 Similar to the South Indian appam, the Sri Lankan ‘hopper’ is a bowl-shaped pancake made from fermented rice flour and coconut milk. They are a culinary staple and are usually served with curry and lunu miris. There are three major types of hoppers, plain hoppers, egg hoppers (which have a whole egg cooked inside), and the noodle-like string hoppers or idiyappam. 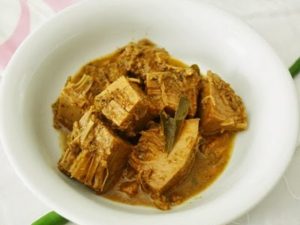 A local favorite, the Sri Lankan jackfruit curry (or polos curry) is special for vegetarian visitors as it resembles meat but isn’t. The starchy seasonal fruit is diced and mixed with spices in such a way that the dish hardly feels like jackfruit at all. 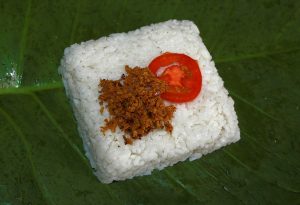 A traditional dish often seen during Sri Lankan festivals, this coconut milk rice dish is accompanied with lunu miris. Made with onions ground with chili powder, dried Maldives fish, and lime, this spicy and tangy sauce is used topping on many Sri Lankan dishes. 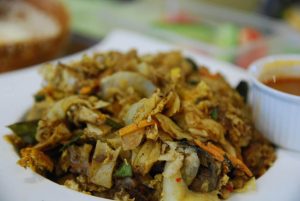 A street food staple, Kottu roti can be heard being made from a block away. It is made with bits of chopped roti fried on a gridle with vegetables, chicken, and spices. The rhythmic clanking of the pan being stirred will remain with you long after you’ve left Sri Lanka. 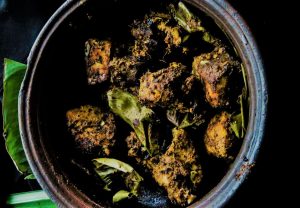 This sour fish curry, flavored with Malabar tamarind (goraka) and fresh tuna, this dish developed as a way of preserving fish on the tropical island. Today is a popular picnic dish and is enjoyed with rice or pol roti (a flatbread made with coconut) 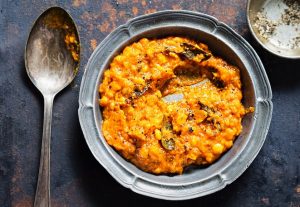 Almost as important as rice, this comfort food is made with split orange lentils cooked with turmeric and fenugreek. The deliciously creamy and spicy is usually eaten at breakfast, though it can also be found at other mealtimes. 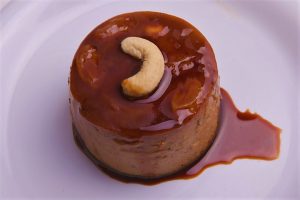 A creamy coconut custard, watalappan is a Sri Lankan favorite. Sweetened with natural kithul jaggery and spiced with cardamom and nutmeg, this silky dessert is one of the most delicious and ubiquitous sweets on the island. 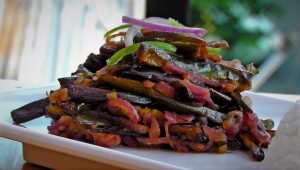 This dish of pickled eggplant is spicy, tangy, bitter, and sweet all at once. Cut into bite-sized pieces, the eggplant is deep fried and then caramelized with sugar, vinegar, red onions, green chilies, mustard seeds, chili powder, salt and a bit of turmeric powder. It is served with rice or curry. 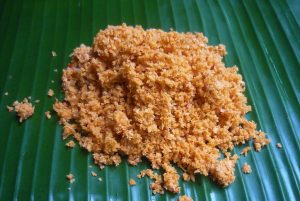 This spicy relish is a Sri Lankan favorite and is made with grated coconut (pol), onions, red chili powder, salt, lemon, and Maldive fish. It is often seen as an accompaniment to anything from hoppers to rice and curry. 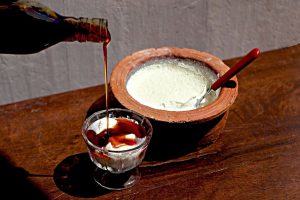 This simple dessert and snack is a combination of rich, thick, and creamy buffalo curd (mudavapu meekiri )covered in delicious kithul palm treacle. Often served in a clay pot, it is one of the delights of Sri Lankan cuisine. 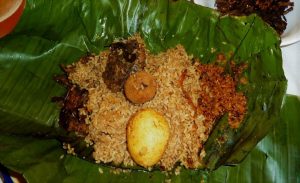 Rice and curry are a staple in most of South Asia, but the Dutch-inspired Sri Lankan lamprais manages to stand out. Served with two special curries – one with meat and the other with eggplant – and accompanied by seeni sambol (spicy caramelized onion relish), fish cutlet, wambatu moju, and an egg, it is steamed to perfection in a banana leaf.