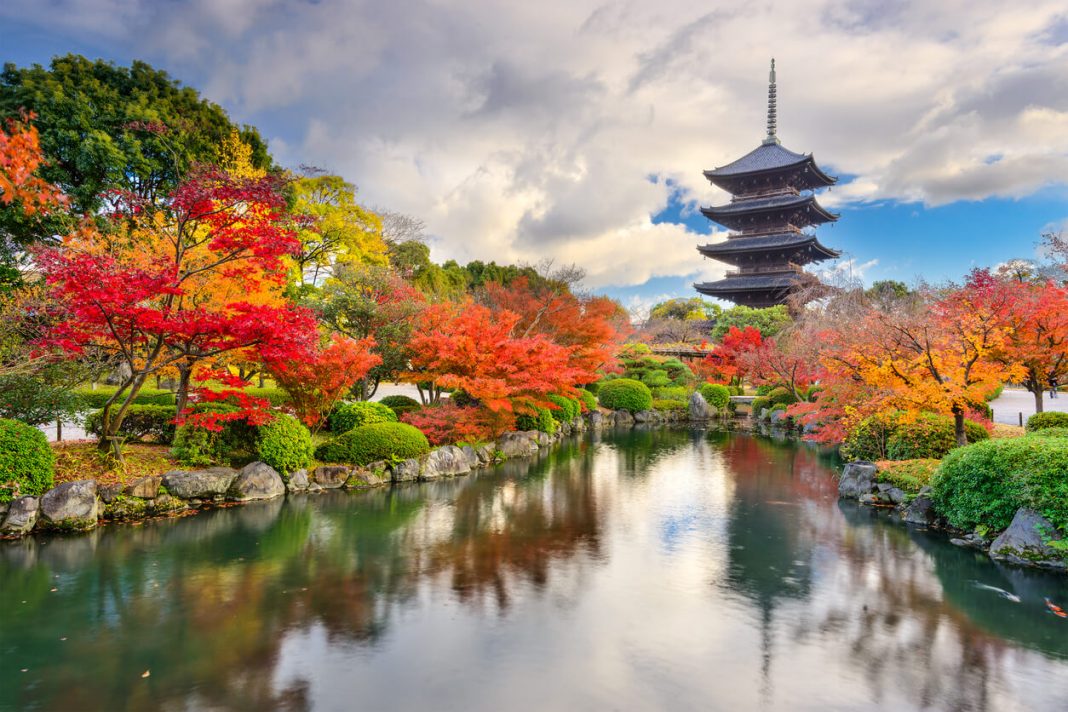 Once the capital of Japan, the city of Kyoto still retains much of its past glory. Situated on the island of Honshu, Kyoto is famous its many Buddhist temples, gardens, imperial palaces, Shinto shrines and traditional wooden houses. It also boasts a working geisha district, kaiseki dining (perhaps Japan’s most exquisite cuisine), and a general aura of peacefulness.

Kyoto serves as an antidote to the hectic and buzzing cityscape of Tokyo, which is only two hours away by bullet train. Tough the city remains steeped in Japanese cultural traditions, it does so with a generous sprinkling of modernity. It hosts numerous hip cafes, sleek boutiques, and a burgeoning modern arts scene. Here’s how to get a taste of Kyoto.

Perched on a hillside in southern Kyoto, this seemingly endless arcade of torii (shrine gates) is one of the city’s most memorable sights. The shrine is dedicated to Inari, the Shinto deity of rice and sake, but it is the 4-kilometer path with the brilliant orange torii that steal the show. Dozens of tea houses line the path up the hill. Don’t forget to visit the nearby Tōfuku-ji, one of Kyoto’s finest temples.


Built on a hill in eastern Kyoto, the Kiyomizu temple is known for its stunning views. It is one of the city’s most popular temples. Built in 798 AD, the Hondō (main hall) is supported by huge pillars and overlooks the Otowa Waterfall. The Otowa-no-taki is believed to have sacred waters.

This famous district in east Kyoto is known for its historic features. Tea houses, willow-lined roads, old houses, art galleries, and quaint shops fill the 17th-century streets. But Gion’s real source of fame are the extravagantly dressed geisha that still live here. They can be found performing at tea houses and theaters. Just remember, if you encounter a geisha on the street, ask before taking her picture!

The famous ‘Golden Pavilion’ is one of Japan’s most famed attractions. Its main hall is covered in glowing gold leaf that shines above the reflecting pool. Originally built in 1397 as a residence for Shogun Ashikaga Yoshimitsu, it was burnt down in 1950. The current structure is a recreation from 1955. It is often packed with visitors, and the best time to visit is early in the morning.

A district on the outskirts of Kyoto, this beautiful neighborhood is known for its shops, temples, bridges, and restaurants. However, the Bamboo Grove is a must-see. This lush green area is quiet and secluded. It leads to the beautiful Ōkōchi Sansō, the villa of former Japanese actor Ōkōchi Denjirō.

Take a break from history and culture, and relax at the natural hot springs of Kurama Onsen. Just north o the city, and in the breathtaking Kurama Valley, this is one of the few traditional onsen to be found near Kyoto. Experience the dramatic views of the outdoor baths, or the quiet relaxation of the indoor tubs. 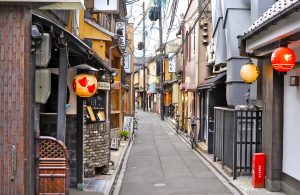 The beating heart of Kyoto’s nightlife, this street is full of restaurants, clubs, and bars. Catering to all kinds of themes and tastes, this is the place to experience the essence of modern Kyoto. Try to visit one of the dozens of karaoke bars lining the street. Karaoke bars are an institution in Japan and are very popular among young professionals.

Unlike the ‘Golden Pavilion’ this ‘Silver Pavilion’ isn’t covered in silver. Also built as a villa, for Shogun Ashikaga Yoshimasa, the plan to coat it in silver was never realized. However, it is home to some spectacular gardens. Paths lead away from them into the mountains. The most famous of these is the Path of Philosophy (Tetsugaku-no-Michi).

This traditional multi-course Japanese dinner is a must-try for culinary aficionados. These meticulously prepared, exquisitely served and, often expensive meals, are aimed at respecting the guests, and making them feel special and at ease. Restaurants such as Roan Kikunoi, Kitcho Arashiyama, and Kikunoi are famous for their kaiseki experiences. However, if you want a modern take on this traditional fare, head to Giro Giro Hitoshina.