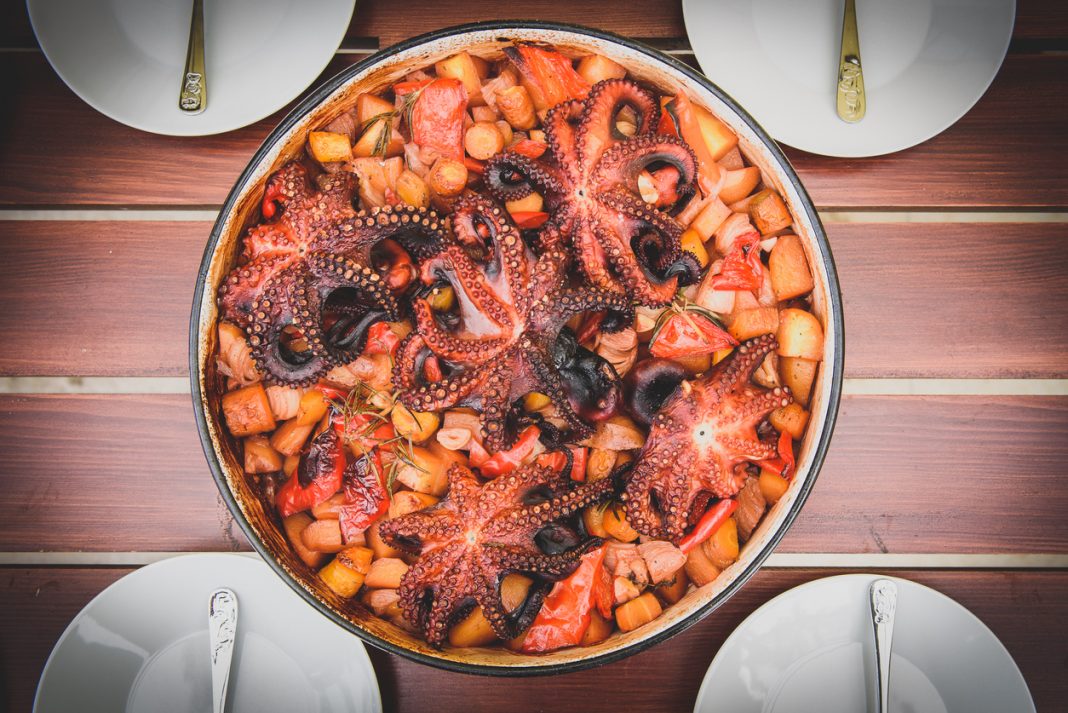 There is no single Croatian cuisine, as the food of the country is made up of food traditions and influences from various regions. While the overall cuisine has roots in ancient Slavic traditions, many influences include Turkish, Italian, Hungarian and a few others. The most distinct difference in the cuisine is between the food of the mainland and the coastal areas.

While the mainland has a lot of influence from Turkey and Hungary, the coastal areas have a distinctly Greek flavour and also Italian (especially Venetian) influence. These influences over the generations have shaped the Croatian cuisine you’ll see and taste why.

Charcuterie is a common feature of all Croatian food. It is the culinary art of preparing meat products such as bacon, salami, ham, sausage, terrines, galantines, ballotines, pâtés, and confit. Without further ado, let’s take you to our list of traditional Croatian dishes that should not be missed!

A classic dish from coastal Croatia, Brudet (also called: brujet, brodeto) is a rich fish stew. It is made all year round in the regions of Dalmatia, Kvarner and Istria; can come in various versions.

Depending on where you are, various types of fish and crustacea are stewed with onions, tomato sauce, wine and drop of vinegar. Covered in water, it is slow-cooked until the fish is done. Herbs and spices are added to this fish casserole according to the taste. It is usually served with polenta which soaks up the tasty fish broth.

Made from rice, cuttlefish, cuttlefish ink, onion, garlic, red wine and olive oil, this delicious rižot (risotto) is available at every seafood restaurant in Croatia. Also known as crni rizot (black risotto) on its menu, it is coloured jet black by the cuttlefish ink. It is a speciality of the Dalmatian region and has olive oil, squid ink, red wine, as well as garlic. It can also contain other seafood, particularly mussels, clams, and other shellfish. A bit of grated parmesan cheese is added for garnishing the dish and you are ready to go!

With the Adriatic Sea right at your doorstep, it would be just illegal not to try some fresh fish grilled-‘Dalmatian style’. The method is very basic: cooked only on the grill with salt, pepper and olive oil- but the results are anything other than basic. Grilled fish such as sardines, sea bream, sea bass or scorpionfish are very popular, especially along the coast. They are best served with some garden-grown blitva (chard) and potatoes and washed down with a glass of Plavac Mali.

Fuzi is quill-shaped homemade spindle-shaped pasta that is typically from Istria region in Croatia. If you are here, you should definitely not miss out on this dish. This hand-rolled pasta is made from a pasta dough that is cut in a diamond shape, then rolled around a chopstick (often pencil) to form a quill-shaped hollow tube. It is usually served with different stews: mushrooms, truffles, chicken, or beef stew but we would suggest you try the local speciality: truffles with fuži made with traditional truffle cream sauce.

Perfect for the summer months due to its light and refreshing nature, Octopus salad can be found on all the traditional menus on restaurants all around the Dalmatian coast. With the availability of fresh octopus in Croatia, it’s easier to get fresh ones right out of the Adriatic Sea. For this dish, the octopus is boiled, chopped up into small pieces, and then tossed with a dressing which contains: olive oil, garlic, vinegar, salt, pepper and lemon. It is then combined with finely chopped tomatoes, onions and parsley.

Mussels and shrimps in tomato sauce garnished with parsley

Buzara is a method of cooking seafood, mainly crustaceans and shellfish, that are wildly used in coastal Croatia. Fresh Scampi, shrimps, mussels or clams are cooked in olive oil with garlic, tomato, white wine and parsley. Tomato paste is sometimes added for colour. Served with traditional hunks of fresh bread, the dish is also sprinkled in the end with breadcrumbs for both a pleasing appearance and taste. So, roll your sleeves and indulge in this yummy Croatian dish.

Meat cevapi with vegetables served in a fresh bun

These tasty grilled skinless sausages are the ultimate Croatian street food! Usually, these small finger-shaped seasoned sausages are made from veal, pork and beef and they are served with chopped raw onions, sour cheese, ajvar (homemade red pepper sauce) on flatbread. Some places combine the three types of meat for an extra delicious flavour. You can find these grilled sausages at most stands on the street (look by the bus stops).

‘Ispod peke’ is something you need to try at least once when you are visiting Croatia. While it can also be called a cooking method, Ispod crepnje, literally translates to under the bell. It’s a meat (which can be chicken, veal, sausages, etc.) and vegetable dish that cooked under terracotta or an iron lid and over burning embers. The meat is slowly cooked in its own juices until the meat is tender, with potatoes and other vegetables. The whole thing is later sprinkled with a mix of honey and cognac and Mediterranean herbs. A festival for taste buds!

Hope we have covered all your favourite Croatian dishes. If not, do let us know in the comment section below!