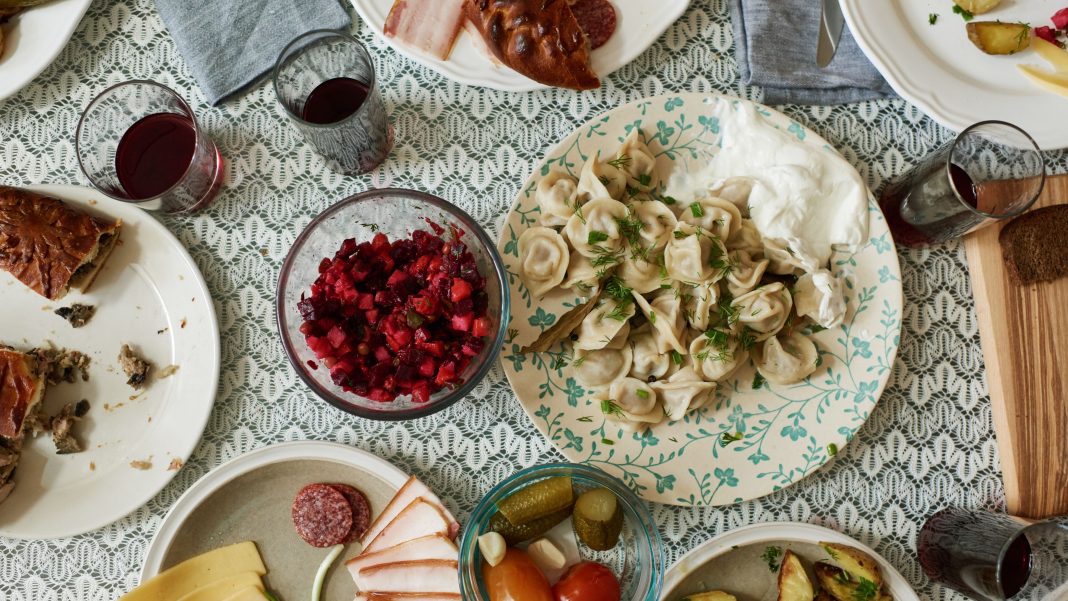 Russian people traditionally like to eat home-cooked food prepared with fresh home-grown products or bought fresh at local markets. Russia may not be the first place to come to your mind when you think of a food destination but be prepared to be surprised by the country’s plentiful delicious traditional Russian cuisines offer you a variety of flavours to satiate your taste bud. Here is a list of must-try traditional Russian cuisines especially selected for you to make your Russian Trip a memorable experience.

Pelmeni is the Russian version of boiled dumplings and is also known as Russia’s national dish. Pelmeni is small bite-sized treat made from unleavened dough with a stuffing of ground meat or even fish and flavoured with onion, garlic, pepper & spices. They are most commonly served with a side of sour cream but this may vary depending on the region where you go to enjoy this. Be sure to try this delicacy especially the Siberian-style Baikal fish Pelmeni if you happen to be in Siberia where Pelmeni is stated to have originated.

Borscht is a beetroot soup and is one of the most famous traditional Russian cuisines. This hearty soup has deep purple-red beet broth as its base and is filled with meat and sautéed vegetables including cabbage, carrots, onions, and potatoes, and is served with a dollop of fresh sour cream on top. It is usually served hot but can also be enjoyed cold. For the full-Russian experience, it is accompanied with a black Russian sourdough bread ‘Borodiksy’, shaved frozen fat ‘Salo’, a clove of fresh garlic, and a shot of ice-cold vodka.

One of the most popular Russian cuisines is Blini or Russian pancakes. Blini is heavily influenced by religious tradition and is so popular that Russians celebrate pancake week or ‘Maslenitsa’ every year one week before the start of spring. Blini are made of yeasted dough that makes them lighter than French crepes and comes with a variety of sweet and savoury fillings like ground meat, egg salad, or sweet cottage cheese. Blini are deliciously served with caviar, sour cream, and honey and there is no reason why you should miss trying such a traditional, popular Russian dish.

Kotleti is another of popular delicious Russian dish that you must try. These are fried meat patties, which come out particularly juicy because of the minced onion and bread crumbs added to the meat. Meat Kotleti is prepared with beef, pork, chicken, or a combination of the above. You can also opt for fish Kotleti, where pike is probably the most popular variety, though you can also find cod or Pollock Kotleti. Kotletis are served with a side of rice or mashed potatoes.

Though off-limit for many Indians, beef stroganoff is another Russian dish that has received global recognition. It is made with finely sliced beef fillet, onion, and mushrooms, all sautéed in white wine and sour cream. There are many variations on the recipe of this dish, with some preferring the addition of tomato paste, mustard, or paprika. You can choose your preferences accordingly.

For those of you not comfortable with beef, Mushroom Julienne is a favourite alternative that you should opt for. This Russian dish is similar in taste to stroganoff but without meat. Mushroom Julienne is made with thinly sliced mushrooms, cheese, sour cream, and cream broiled/grilled for a crusty top. While mushroom as you see is the basic dish here its ingredients can be replaced by chicken or seafood to enjoy variety.

Solyanka which is also called “hangover soup” is another popular Russian cuisine. It is a thick soup that is cooked with meat, fish, or mushrooms. Other ingredients used include olives, pickled cucumbers with brine, cabbage, potatoes, sour cream, and dill. It is very nourishing and you must try it.

Sirniki is a popular breakfast dish in Russia though it may be served as dessert with jam or sour cream. They are small pancakes made of cottage cheese, eggs, and flour with options to add raisins or dry apricot to make them sweet. You will most likely be served Sirniki for breakfast by the hotel on your trip but still, never miss the chance to try one of these delicious Russian cuisines.

Shashlyk is a popular Russian food that is often enjoyed in an outdoor environment similar to a barbecue. This dish is a form of shish kebab but with chunkier portions of lamb, beef, chicken, or salmon. Shashlyk is served with unleavened bread, Russian pickles, and even a spicy tomato sauce for a complete meal.

In addition to meat, potatoes, soup, salad, desserts also have a special place in Russian food culture. And Medovik is one such dessert/pastry that you will find all over Russia which you will surely love. This soft creamy cake is made up of multiple layers of ginger and cinnamon-spiced honeyed pastry with sweetened sour cream and condensed milk sandwiched in between.

Mimoza is a traditional Russian salad prepared by layering different ingredients separated by a light layer of mayonnaise. The ingredients include fish which may be tuna, mackerel, salmon, or trout properly mashed, then boiled egg white and yolks, onions, crumbled cheese, and sometimes also boiled potatoes and carrots finely grated. The boiled egg yolks are usually the final layer and final garnishing is done with chopped dill. The salad not only looks delicious but tastes too.

Rasstegai is another popular traditional dish of Russia. It is a pastry with a hole in the centre stuffed with a variety of fillings. Rasstegai is traditionally served as an accompaniment to soups or broths and the hole in the pastry is used to add broth to the filling. The pastry is prepared with flour, yeast, milk, eggs, butter, sugar, and salt. For fillings, traditionally minced fish is used but for variation liver with eggs or rice with mushrooms are also used and equally enjoyed.

Kurnik is a traditional Russian dish that is generally served in festivals/wedding feasts. It is a Russian pie that consists of pastry made from various types of dough and shaped into a large dome that is filled with layers of chicken meat, eggs, rice, kasha, mushrooms, and other essential ingredients. Kurnik is usually served with a sauce or as a side dish with soup.

Comfort Food Made With Simple Ingredients

Rich in carbs and made with the simplest ingredients. Russian dishes give you warmth during cold winter months and keeps you feeling refreshed throughout the summer. You will be surprised by the variety of flavors Russian cuisine has to offer and this beautiful country has a lot to offer other than Vodka.