This is the second instalment of my series ‘The Destination is You’ – a journey into spiritual travel (link to the first article at the bottom.) In this instalment, I embark on a spiritual exploration close to home – at the Veerabhadra Temple, Lepakshi; 2 hours from Bangalore.

We depart early to miss the traffic through Hebbal and stop for neer dosa at Nandi Upachar after passing the airport. I’m accompanied by an American photographer and Santhosh, a young enthusiast from Bangalore’s Historical Trust, who knows Veerabhadra temple well.

We pull into a small parking lot and leave our shoes in the car, walking barefoot up the stone steps, surrounded by a family of monkeys. I turn the tap to wash my feet and a mother monkey holding an infant comes to drink the water splashing off my feet. I cover my shoulders with a shawl and walk further up the temple steps to greet the deities.

The temple is Shiva’s. I meet him first in the form of Veerabhadra as I enter the temple, just ahead of me. The priest puts holy water in my palm and I drink. Diagonally opposite him is Durga. The goddess is facing away from her pilgrims, lest we look at her directly and fail to withstand her power. Instead, we view her reflection: ‘as through a glass darkly’. I smile at this and think, ‘yes, the architects understood her well.’ I am overjoyed to meet her.

We begin a clockwise circumambulation behind Shiva and come first to Saint Agastya’s cave. I thank him for his long meditation. I once entered a meditation hall in Bangalore built in his honour and literally sank under the weight of the energy there. He must have gotten something right. I am somehow still benefiting all these centuries later. It’s humbling.

After this, I greet Parvathi and Bhadra Kali. Santhosh tells me that the goddess looks like Parvathi when she is happy and like Kali Ma when she is angry. I smile at this explanation. I like the fact that space is made here for all the Goddess’ many moods.

We make our way towards the door. There I stumble onto something I never expected. And it floors me. I ask Santhosh, our guide and historian, to tell me over and over. I am afraid I have misunderstood.

“No, this is Lord Vishnu. Directly across from him is Lord Shiva, see. The priests ensure that the aarti happens at the exact same moment so that neither god is given preference.”

“But there have been great battles just to determine if a town would host a Shiva temple or one in honour of Vishnu. What are you saying? These two deities can’t be inside a single temple, can they? And facing one another as well!”

“There is no enmity between them, see. It’s only that their followers don’t get along. Outside, you will see them in the marriage hall standing side by side. They are together here.”

We make our way outside. It is one of the most beautiful temples I have ever seen. And very peaceful. Only a few other families are there with us. The temple feels like a mini-Hampi: all ancient stone carvings built on a sparse stone landscape. The stone carvings from the Vijayanagar period hold nuance and portray hidden personality quirks of the gods and goddesses adorning the temple pillars and walls.

In one scene, Parvathi has raised her foot in an elegant gesture to gain Shiva’s attention. Santhosh tells me that she is always having to compete with his ascetic side, the part of Shiva prone to cover himself with ashes and journey into other states of consciousness. Here she stands on one foot, an ascetic practice to gain his love.

I am the child of spiritual seekers who departed at various times and in various ways in search of transcendence. I stood in front of Parvathi and her charming foot for some time, recognizing myself in her efforts to bring her beloved’s gaze back to the wonder of here and now, to the beauty right in front of him.

I don’t visit temples often, but when I do, I usually experience a lot of joy. I think it is because the rituals of Hinduism create that ‘beauty right here in front of you’ kind of experience. They are rarely abstract and far from austere. There is little emphasis on holiness or perfection.

I hold the flowers in my hand, breaking them off and sticking them, gold and yellow, in the crevices by Parvathi’s feet. I light candles for Durga and feel the heat hit my face as I near her. After drinking the cool holy water, I take the red tilak on my ring finger and mark my third eye, hoping some of Shiva’s energy will come with me. I smell the burning ghee and the remnants of the milk that has been poured over the temple lingams. The stone floor is cool on my bare feet.

All of this is very different from my early episodes interacting with a monotheistic god: abstract, faceless and engaged through the written word. The experience was always a bit left brain. My mind was involved and I sometimes perceived beauty or clarity, but my body was typically left out, unwelcome.

Here, everything is tangible. I take my body with me to the temple. Nothing is left out.

The monkeys at the temple entrance accompany me, the priest gifts me flowers and bananas, circles my head with the smoky diya. Santhosh tells me story after story of Shiva and Parvathi, of the temple dancers and the wedding hall built to entice Shiva into marriage, attended by all the gods. The sky is overcast and there is a beautiful breeze that comes whispering through the 16th century stone pillars. The wind reaches the tall tower of brass bells and it sings in response. 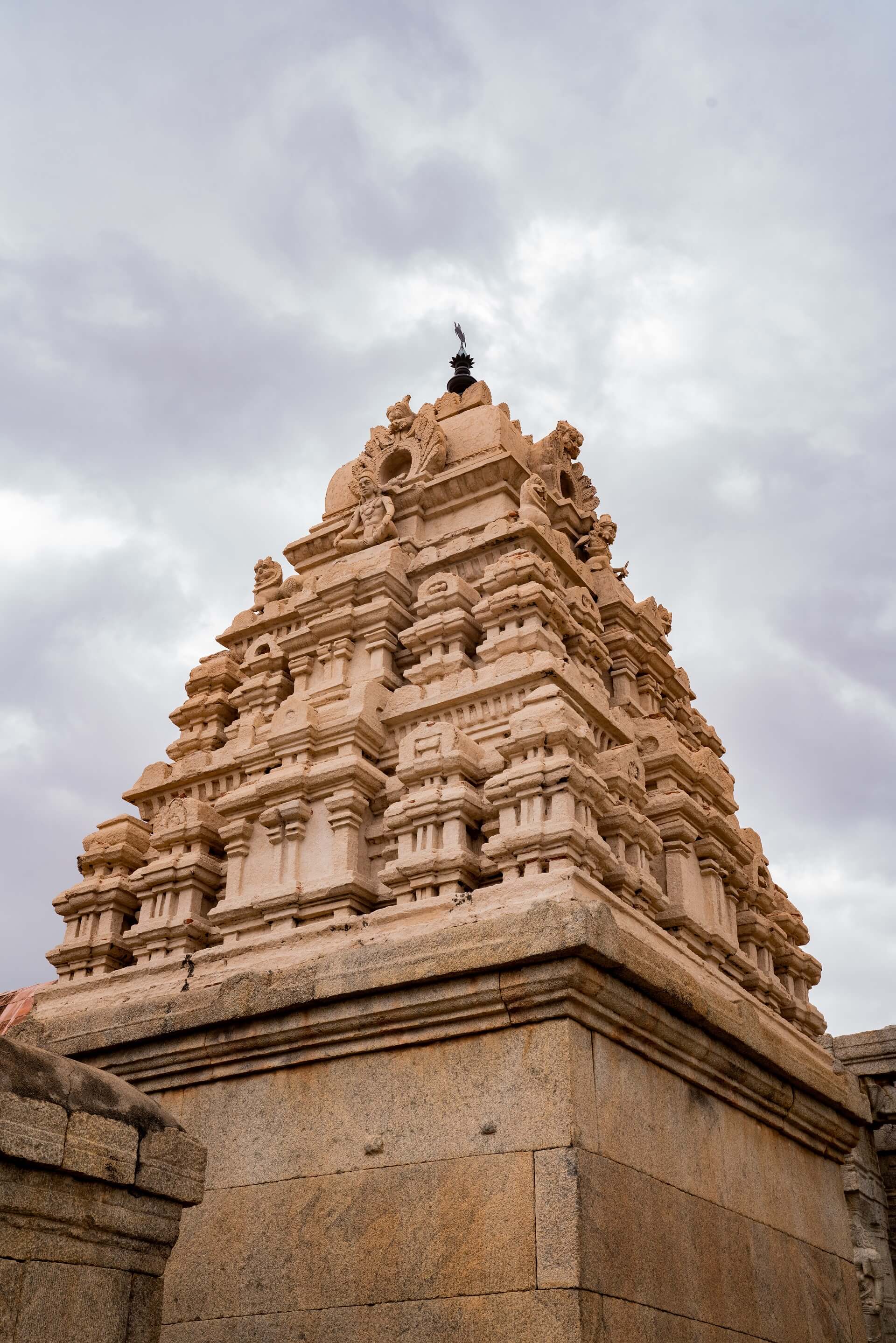 We sit down for a moment, looking at the stone compartments where pilgrims used to sleep with their families. We’ve peeked into every crevice of the temple, sitting on the floor to gaze at the ceiling frescos, placing our hand in Sita’s footprint to feel the water from the underground spring. It’s time to go.

The monkeys are no longer there as we go down the temple steps. I look for them.

Santhosh tells us to keep our shoes off a little longer in the car and we stop at the huge stone Nandi and walk barefoot around him. He is facing the Shivalingam in the temple half a kilometre away.

Tucked inside the fold of the bull’s right front hoof, a small Indie dog is curled up sleeping. We buy fresh coconuts and sip them in silence. There is a small kerfuffle with the coconut vendor about breaking the ₹500 note.

I think about Shiva and Vishnu in the temple, the priests circling the fire around them simultaneously. I think about the kind of openness this requires and about the openness I have experienced in this part of the country, what it has afforded me. Mainly, it is the same feeling I experienced at the temple, of having all parts of me welcomed. My imperfections accepted, my humanness celebrated. I lay my head against the window pane of the car and think, ‘this is not a bad place to be.’

Also read: Spiritual Travel: When embarking on spiritual travel, you must know where to start.